Warning: This post contains spoilers for The Handmaid’s Tale Episode 7.

We’re a loooooong way from Stoneybrook.

If The Handmaid’s Tale feels dystopian and surreal to you, imagine how it must be for Rachel Shukert, who joined the Hulu drama’s writing staff this season and whose most recent project before that was creating/showrunning Netflix’s sunny, heartwarming and overall just plain good-feeling The Baby-Sitters Club. (We’re still not over its unceremonious cancellation, by the way.)

Fortunately, Shukert — whose other TV credits include GLOW, Supergirl and Cursed — has quite the range. So she was tapped to pen Handmaid’s Episode 7, aka the hour in which June helps Serena give birth to son Noah in an abandoned barn. (Read a full recap, and hear what series stars Elisabeth Moss and Yvonne Strahovski have to say about shooting the ep.)

The episode touches on what the two women have in common, and how their feelings for each other are affected by going through such a pivotal life moment together. “We wanted to show what could’ve been,” Shukert tells TVLine, “but also the way that Gilead rots everything that it touches, whether it’s friendship, whether it’s marriages, whether it’s motherhood, whether it’s just all kinds of normal human interactions.”

Read on for more of her observations about the episode, including what it’ll mean for June & Co. in the remainder of the season.

TVLINE | I was really struck by how funny this episode is even though there’s literal life-and-death stuff going on.
[Laughs] Yeah. Well, I personally feel that it just has to do with the way that I write, you know?

And this is really an episode, too, where June and Serena are both kind of becoming human again, to themselves and to each other. So, it was sort of a conscious decision — like, how can we get to a place where there’s moments of humor? What about Gilead is sometimes funny, and how could that have been bonding for the two of them early on. Those were the sort of things we tried to keep in mind. 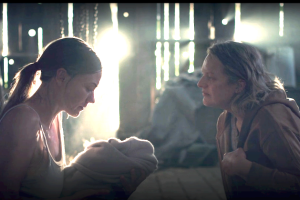 TVLINE | So you find out that you were writing the episode where the birth happens, and it’s just come off of this big cliffhanger. What’s your first reaction?
I felt pretty excited and honored to be in charge of this episode, because I was new to the show. It felt very much like this huge moment of the season was in my hands and I didn’t want to f—k it up, you know? [Laughs]

We had already sort of put as a goal for the season from the beginning, like, God it would be so amazing if June could be like present at birth. Is there any way we could make that happen? How can we figure out a way to make that happen that doesn’t feel completely implausible? So, there was like a lot of architecture and a lot of conversations that went into figuring out a way to kind of throw these two together, this sort of odd couple birth scene.

And then, I think, on the B side, it makes total sense. Of course this will end up happening, of course they wind end up together, of course there’s this moment where they see themselves in each other and that that winds up being the thing that cracks both of them open and pulls them back from the abyss a little bit… But I was also excited to write the episode, just as a mother and someone who still has a young child, for whom the feeling of giving birth is, not immediate, but I remember! [Laughs] And I wanted to make sure it felt really authentic to that experience.

TVLINE | I did love the flashbacks to early in June and Serena’s relationship, because when the show starts in Season 1, they’re already entrenched in not liking each other. This episode made me think they might’ve been friends in a different life. Is that anything you thought about?
Absolutely. I mean, I feel like these two have always had this kind of like bond to each other that keeps drawing them back together even though they could completely be rid of each other, right? And they’ve had moments throughout the show of being allies and understanding each other. I feel like that’s the thing: They really do have each other’s number in the way that, like, your best friend just like knows what you’re going to do and knows everything about you.

And with that amount of insight into another person, you have to have a certain amount of empathy for them, and know where they’re coming from and see enough of yourself in them… I do think Serena and June have a strange bond. And it was interesting to think about what it could’ve been like at the very beginning, if there was like a different way this relationship could’ve gone, you know? Obviously it’s a horrible situation…But to think that there was like another world where they would kind of get each other, you know? It might’ve gone in a different direction.

But then, the corruption of Gilead is that it sours every relationship that it touches. Because it’s not possible really to have a friendship or a real relationship in a totalitarian system, right? What totalitarianism steals from you is ultimately your ability to really relate to other people in an unguarded, intimate way.

TVLINE | When they’re in the hospital, I found it hilarious that of course Serena is anti-formula. Of course she’s one of those moms!
I know! [Laughs] Yeah, the women in Gilead, they’re very natural.

TVLINE | June’s clearly conflicted when she realizes that Luke had a hand in Serena’s detention at the end of the episode. What can you tell us about what that realization portends for the next episode?
Well, June’s conflict and horror in that moment with Luke is that we have seen her lean on Luke to be the thing that curbs some of her worst impulses, the most reckless, vengeful impulses. She can be as crazy as she wants [about] wanting to kill people because she always knows that Luke is there to be reasonable. He’ll be like, “OK, but you’re not actually going to do that…”

And so, I think that some of her horror in that moment is that she has kind of made Luke into her, right? By telling Luke, “No, no you have to be harder to these people. You have to do this, you have to do that,” she actually recreated the worst moment of her life for Serena, which was having her child taken away from her.