The Marvelous Mrs. Maisel is clearly taking a “go big or go home” approach to its fifth and final season. To wit: The Prime Video smash held its final table read at New York’s Steiner Studios on Wednesday and it’d be an understatement to say no expense was spared. 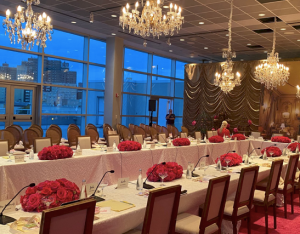 The streamer’s Head of Awards, Debra Birnbaum, shared on Instagram Thursday a collection of photos from the grandiose event, which featured an opulent banquet hall-type setting and culminated with a fireworks display.

Maisel‘s titular star, Rachel Brosnahan, also shared images from the four-star affair. “We had our last table read yesterday,” the actress wrote. “It kicked off a series of lasts we’re about to share over the next few weeks. Many, many feelings. Gratitude most of all. Can’t wait to share this last hoorah with all of you.”

It was back in February that Prime Video announced that Season 5 would be the series’ swan song.

“Amy, Dan [Palladino, executive producer], and The Marvelous Mrs. Maisel have blazed an unparalleled path, elevating the stories we tell about women, challenging the norms in our industry, and forever altering the entertainment landscape with their one-of-a-kind storytelling,” Jennifer Salke, head of Amazon Studios, said in a statement at the time. “The dozens of awards cement Maisel’s legacy in many ways, but what’s even more enduring and poignant are the characters Amy created and the joyous, brilliant, singular world she and Dan brought to life.”