We’ve got questions, and you’ve (maybe) got answers! With another week of TV gone by, we’re lobbing queries left and right about lotsa shows including Only Murders in the Building, Better Call Saul, Ms. Marvel, Days of Our Lives: Beyond Salem and others!

1 | TVLine reader Scotty asks: During Dynasty‘s flashback to when Charisma Carpenter’s Heather babysat a wee Fallon and Stephen, how did Alexis already have her new, non-Nicolette Sheridan face? 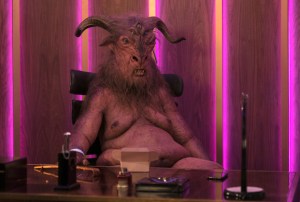 2 | If you had to pick, which name-checked actor would you like to see actually play the human incarnation of The Manager on Evil: Ted Danson or Liam Neeson?

3 | On The Chi‘s Christmas episode, what was the dirtier yule-themed penis reference: Darnell sending Jada a photo of mistletoe over his nether region, or Douda telling Tracey he had “the perfect stocking stuffer” for her, provided she tell him where to put it?

4 | Does the latest DC’s Stargirl Season 3 trailer too strongly suggest that Joel McHale’s character is perhaps not really Starman, but an imposter with an eeeevil agenda?

5 | Was it really such a hot idea for Animal Kingdom’s Craig to be shot by a zillion paparazzi while the heist was going on inside the pop star’s mansion?

6 | Is The Bachelorette trying to memory-hole the fact that they did do a season with two Bachelorettes before, with Kaitlyn and Britt? (Or do they not count that, since they ditched Britt in the premiere?) And how bad must magician Roby and twins Joey and Justin feel to be the only three guys cut on the first night?

7 | We knew Better Call Saul‘s Lalo probably wouldn’t survive the end of the series, but didn’t a great villain like him deserve better than an anticlimactic death in the dark? And didn’t showing Gus plant a gun in the superlab in a previous episode take all the suspense out of their showdown? 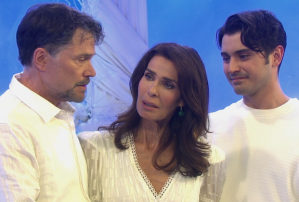 Did Days of Our Lives: Beyond Salem, Chapter 2 make you think, “Wow, it would be nice if just once, everyone didn’t wear all white in the hereafter”? Also, does no one ever spill on their clothes in heaven?

9 | Following that brief tease, Only Murders in the Building will show us a bit more of the Brazzos reboot being filmed, right? And while we love a secret tunnel, where exactly do these long, uninterrupted hallways — which are apparently just one room away from the exterior wall? — fit within any given floor plan…? Also, wouldn’t the tenants have heard our central trio (and Lucy) inside the “Arcatacombs”? They were all speaking at full volume! 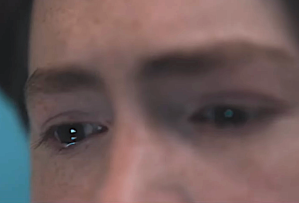 How many Heartstopper fans were crushed that the show didn’t get a single Emmy nomination… until you remembered that Netflix was submitting it for consideration in the newly created Children’s & Family Emmys?

11 | What is the “spread-the-wealth” value in allowing for as many as eight Emmy nominees in acting categories if half of them (or more!) come from the same show? 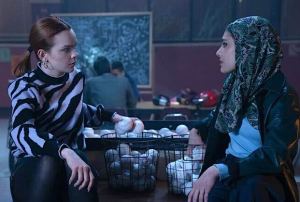 Who at Ms. Marvel thought these were “softballs”? (And if your argument is, “Well, they’re soft baseballs,” the whole premise was that Zoe is on the school “softball team.”)

13 | On The Challenge: USA, were you surprised that fellow Cookout member Xavier turned on Tiffany so fast? And how far do you think the seemingly unbeatable Tyson is going to go this season?

14 | Are you hoping that the events of South Park: The Streaming Wars Part 2 will finally bring an end to Tegridy Farms, a joke that stopped being funny a long time ago? 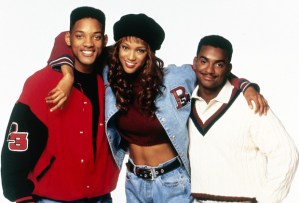 With Alfonso Ribeiro now co-hosting, Dancing With the Stars is going to have an All-Carlton Dance Night, aren’t they? (Or is that going to the well too often, since Ribeiro reprised that jig as a Season 19 competitor?) And what are the chances the first episode acknowledges Banks’ half-season stint as Ribeiro’s Fresh Prince costar?

16 | Show of hands: Who was absolutely stoked that Big Brother‘s Taylor got to stay in the house? And while we obviously hope Paloma gets the mental health support she needs, how disappointing was it that CBS didn’t show all of the nasty things she said and did to Taylor in the edit? 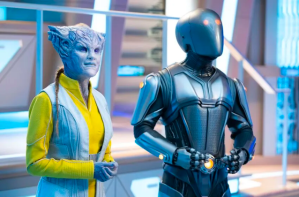 17 | How do we feel about The Orville cramming four distinct and fertile storylines — the Janisi visit, Isaac expressing emotions/love to Claire, John and Talla’s injurious sex life, and the Kaylons’ origin flashbacks — into one episode? And if Inside Line hadn’t told you that Christopher Larkin would be in the same episode as The 100 co-star Eliza Taylor, would you possibly have recognized him/his voice? ↑

18 | Given the recent activities on For All Mankind, we gotta ask: Do they have condoms in the Mars habitat?

19 | As nice as it is to see  Stranger Things star Noah Schnapp out there  confirming Will’s sexuality, shouldn’t the Netflix series  itself eventually give us an actual scene where the character is even a bit  more forthright, with someone?