Evil’s Sister Andrea is about to confront her… if not scariest, definitely loudest challenge.

The small-yet-mighty nun will develop a relationship with Kristen’s exuberant gaggle of daughters as Season 3 progresses, Andrea Martin tells TVLine.

“She doesn’t have a lot of patience for frivolity. She wants to just get to it,” the Great News and Difficult People alum says with a chuckle. “And you know, kids are frivolous. So you’ll see what happens there. It’s a beautiful little moment.”

The interaction with the Bouchard girls also will provide a beam of light in the darkness that threatens to overtake Sister Andrea’s world, from the Hell-sent demons she sees hourly to the patronizing priests who are trying to bump her into retirement.

Read on for Martin’s thoughts on Sister Andrea’s trial and more.

TVLINE | Sister Andrea seems very assured, but I have to assume that when you’re under constant spiritual attack, you get shaken every once in a while. Do you think that her assurance that she’s in the right, and God will prevail, goes down to her core?
You know, I do. In [Episode 5], you hear her say that she was a child, she was 12, when she saw her first vision, and that’s when she became interested in becoming a nun. I’ve done research, having never played a nun before and not having that kind of faith, and I found this wonderful woman named Sister Simone Campbell, who is an activist… She’s outspoken… The Church is everything to her. And so, I thought, well, there are people out there that are fighting for every man, but fighting with humor. With no judgment. If you think of nuns, sometimes, it’s [about them] having a lot of judgment. But I don’t think that Sister Andrea does. She understands that David would have sexual desires. Look at him. He’s this gorgeous man! [Laughs] And even though, you know, his vocation now is to be a priest, he has doubts, and she understands that. So, I just think it’s deep belief, which most of us don’t have in our lives. So it’s exceptional to play somebody like it, to live vicariously. 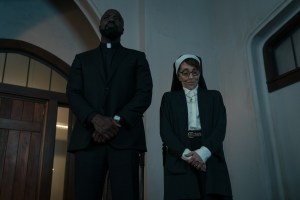 TVLINE | As David is mounting a defense for Sister Andrea, she stops him from embarrassing Dr. Boggs in front of the Council of Heretical Practices. Talk to me about why you think she had that motivation to not want to take him down.
Well, first of all, she’s a good person. And she knows that he’s struggling himself, because he’s seen demons. He’s really struggling. He doesn’t want to hurt her. She knows that… She’s always under the belief that God is going to protect her. So, I think in that moment, she doesn’t want to hurt or bring him down, because I think she believes in the larger picture, that something else will save her.

TVLINE | Because you became a series regular this season, we’re privy to more of Sister Andrea’s life than we previously had been. Do you think she’s always had demons hanging around her like this, or are they ramping up their game?
I do think that they’re ramping up their game, for sure, because she’s fighting harder. First of all, she’s against such obstacles, that she’s fighting harder. And also, there’s more evil in the world. That’s what I believe. There’s just much more evil, and she sees them and the show sees [her] seeing them, I think there’s a larger presence, and they’re witty and clever and grotesque.