We’ve got questions, and you’ve (maybe) got answers! With another week of TV gone by, we’re lobbing queries left and right about lotsa shows including Outlander, The Girl From Plainville, The Ultimatum: Marry or Move On and Legacies!

1 | As you stumbled upon the Jimmy Fallon/Jimmy Kimmel April Fool’s switcheroo, did you at first blush think it was maybe just a bit of green screen trickery? That they weren’t actually on one another’s sets?

2 | Did last week’s Pachinko give Titanic vibes, juxtaposing the well-off but miserable singer in first class with Sunja and Isak in steerage?

3 | Did you get chills seeing Cody Rhodes return to WWE at WrestleMania? Do you think he’ll be better utilized this time?

4 | Wasn’t it a nice touch how the Grammys had tour crew members introduce the musical performances?

5 | Which late-night host do you think will lose his house bandleader first: Jimmy Fallon (after The Roots’ Questlove nabbed an Oscar last month) or Stephen Colbert (after Jon Batiste took home multiple Grammys on Sunday)? 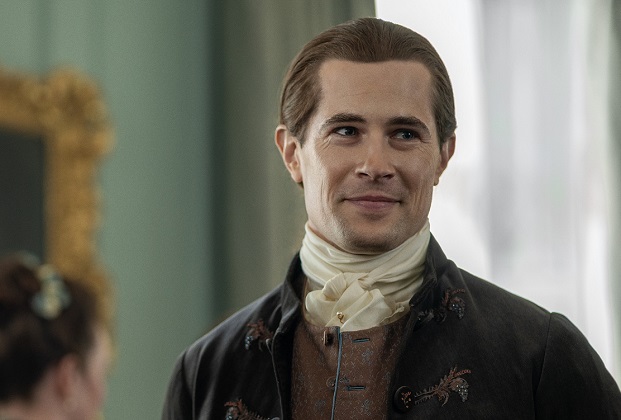 6 | The years have been good to Outlander’s Lord John Grey, haven’t they? While Claire and Jamie are sporting eyeglasses and gray hair, LJG looks like he’s barely aged a day!

7 | Isn’t it about a decade too late for Shining Vale to include an “embarrassing video gets Auto-Tuned and goes viral” storyline?

8 | If Sanditon‘s handsome but duplicitous Colonel Lennox is working against Tom Parker, we can’t root for him to end up with Charlotte, right?

9 | As a Call the Midwife fan, were you satisfied with Trixie and Matthew’s kiss, or did it leave you wanting more?

10 | For Glee fans watching The Girl From Plainville, is the latter show making you want to revisit old Glee songs, or never listen to them again?

11 | On This Is Us, why did 70-year-old Rebecca have to hightail it to the park, and not CrossFit Toby? Are we to believe no one noticed blind toddler Jack on his solo venture? Not even someone in one of the cars that drove by as he waited to cross the street on his own? And did that Big Green Egg smoker get a bad rep for nothing? On a different note, is it surprising that This Is Us — one of NBC’s best, most acclaimed hits of the past decade — isn’t getting a retrospective special to accompany its May 24 series finale?

12 | Doesn’t it feel like this new Orphan Black series is coming several years too late?

13 | Anyone else find it odd that so many 24-year-olds want to get married and have kids right away on The Ultimatum: Marry or Move On? And how did the show decide which contestants would choose their new partners first? Didn’t that kind of leave Colby and April with no choice but to pick each other? 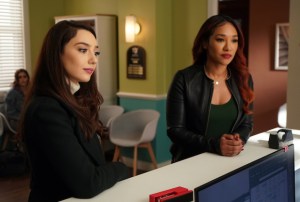 14 | Are we supposed to be OK with The Flash‘s Sue Dearbon using a family “connection” to get an adoption’s “no contact” request bypassed? And were you unexpectedly moved by Black Flame quoting Ronnie and thus revealing who it is to Caitlin?

15 | Was the timing of Good Sam‘s snowstorm-related multi-car pileup and the one that happened this Monday in Pennsylvania a bit eerie?

16 | On Survivor, were you surprised and/or mildly peeved that the Ika tribe’s Beware advantage was “hidden” in plain sight? And what on Earth was the strategy behind Chanelle voting for Mike at Tribal Council, when she knew damn well the axe was going to drop on either Daniel or herself?

17 | As primed as A Million Little Things has made us for bad news, did you worry that that last “made you look” on the doctor’s clipboard was going to be some terrible update about Maggie’s health? And then, with your guard down, were you smacked even harder by Maggie’s discovery of the lump in Gary’s breast at the end of the episode? And finally, who would’ve thought that this show would sneak a pretty blatant ejaculation joke into the last few minutes of the hour?

18 | Did Snowfall‘s reverse Godfather kiss between Louie and Franklin make you uncomfortable because, um, incest?

19 | Minx viewers: Given Richie’s comments this week, how many times do we think Doug and Tina have been a couple before now? 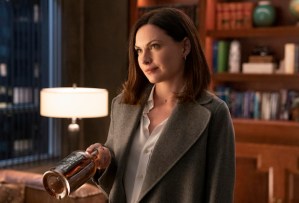 20 | On Bull — if only because the series is ending — did you half-expect there to be a closing stinger hinting that Diana did kill her lover’s wife? Speaking of Diana, how do we get Jill Flint back on our screens regularly again?

21 | Complicated family dynamics have always been the bread and butter of the Vampire Diaries universe, but do Legacies‘ new gods feel a bit too much like a retread of the Mikaelsons?

22 | In The Last Days of Ptolemy Grey‘s season finale, did Robyn and the police hear that recording Papa Grey made of the killer, or did the witness finally come forward? And who’s paying Niecie’s court fees?

23 | Does Sarah Palin’s congressional run mean we can look forward to Tina Fey reviving her impression on SNL?

24 | Does it feel as if Apple TV+ is announcing a new series every day?