Tracy Morgan (30 Rock) makes his debut as Calvin’s brother Curtis on the Monday, March 28 episode of The Neighborhood (CBS, 8/7c) — and TVLine has your exclusive first look at his grand entrance. 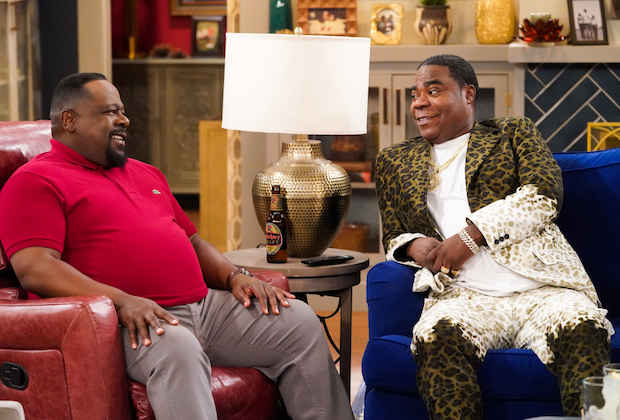 As longtime fans of the CBS sitcom already know, Calvin resents Curtis’ relationship with their mother, who began favoring her younger son after he won the lottery. During “Welcome to Bro Money, Bro Problems,” the impulsive Curtis pays his big brother a visit and immediately creates chaos within the Butler household.

Elsewhere in the episode, Dave and Gemma run into challenges while trying to declutter their home.

Morgan and Cedric the Entertainer have a long-standing relationship, having previously worked together on the Chris Rock film Top Five, as well as Morgan’s TBS sitcom The Last O.G., on which Cedric co-starred as halfway house owner Mullins.

The Neighborhood, currently in Season 4, has already been renewed for Season 5 — its second under the helm of new showrunner Meg DeLoatch (Eve). Prior to her first episode, DeLoatch spoke with TVLine about her desire to expand the comedy’s storytelling by diving deeper into the lives of the Butler and Johnson families.

“When you come in and the show is already beloved, you don’t want to be the one that takes it off the rails,” DeLoatch said. “At the same time, while it is wonderful to do fun episodes and tell a lot of great jokes, it’s also great to be able to tell some meaty stories, as well.”

She started with a Season 4 opener that introduced Calvin’s Aunt Desiray (played by The Color Purple‘s Margaret Avery), the family historian who confirmed that next-door neighbors Calvin and Dave are, in fact, cousins. Subsequent episodes dealt with drug addiction and miscarriage.

Are you looking forward to Morgan’s guest stint on The Neighborhood? Watch the sneak peek above, then hit the comments.