Monday’s The Neighborhood revealed not only that Gemma miscarried Baby No. 2, but that Tina had also suffered a miscarriage before she became pregnant with Marty.

Penned by new showrunner Meg DeLoatch, the emotional half hour was as much about how Dave and Calvin responded to their respective losses as it was about their spouses. The episode culminated in the Johnsons and the Butlers coming together to memorialize Gemma and Dave’s unborn child.

In separate interviews, which have been edited for clarity, DeLoatch — who was inspired by her own miscarriage — and series star Beth Behrs break down the episode…

TVLINE | Having used your own miscarriage as the basis here, what was it like to sit down and actually write about it? Was there a moment where you asked yourself, “Just how personal do I want to get?”
DELOATCH | When I first wrote it, no one else saw it but me, right? So it was cool to write it for myself. I’m rarely unable to find any humor in a situation, so even though that was one of the hardest, darkest times in my life… there were still going to be jokes. By the time we as a group worked on it, and everyone got a chance to chime in and make notes, it was a sweeter episode. Not as edgy as when I put it together. [Laughs]

TVLINE | Some of our readers considered it a spoiler, but I have to assume the decision to reveal the miscarriage in advance was intentional, to warn those who have had a similar experience in case they weren’t ready to see it play out on screen…
DELOATCH | Exactly, yes. That was a tough time in my life. I went through a period where I didn’t wish my friends any less, but I didn’t want to go to baby showers, and I didn’t want to be around women who were managing to accomplish what I felt like I couldn’t. And nobody wants to shock someone… With no warning, it could have been hurtful to some people. So we just felt like, “We’ll say it, and if it feels right for them to watch it, great. If not, maybe at another time they’ll be able to receive it.”

TVLINE | Beth, what sort of emotions did the script evoke when you first read it to yourself?
BEHRS | The moment I read the last two scenes, I was fully weeping. I then read them to my husband, who also began to well up. Then I immediately texted Meg and just said, “Thank you for this beautiful episode.” 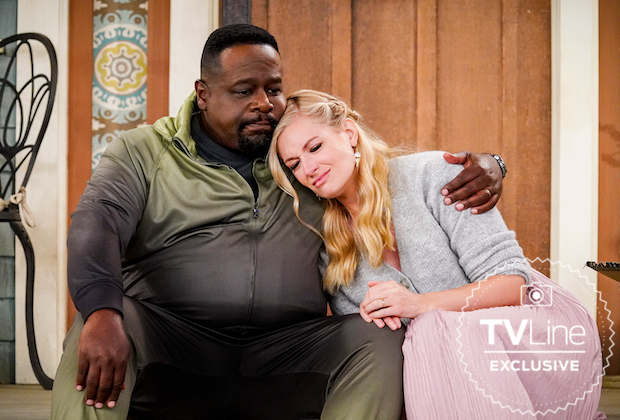 TVLINE | Knowing that this was a deeply personal episode for Meg, did you find yourself turning to her more to talk through certain scenes?
BEHRS | Absolutely. But from the table draft on, her writing was so raw, honest and gripping that my job as an actress was easy. When the writing cuts straight to your guts, like this episode does, the actor has no problem getting there emotionally. I felt honored that Meg trusted me enough as an actress to deliver something this emotionally raw… I also felt a responsibility to all the women and men who suffer and are still suffering from this immense grief, to go to that deeply vulnerable place within myself and let it be seen fully on screen.

TVLINE | Gemma goes through some, if not all of the stages of grief. Meg, did you have all those stages in mind when you were writing?
DELOATCH | I didn’t list them out. Instead, I just followed the more emotional, internal journey. More than anything, I felt like this was a woman who understands that, as a mother and as a wife, that she has a responsibility to her family to keep functioning and to keep moving forward, and she felt like she didn’t have the luxury of breaking down. And she also felt that fear, which is, “If I break down, fall apart and cry, I might not get back up,” or “I might not get back up for a long time.”

TVLINE | Beth, how was it for you to navigate all those stages in the span of 22 minutes? Did you need to do anything, for a lack of better word, to “recenter” yourself, and return to a more neutral headspace between scenes?
BEHRS | During rehearsals, I tried to explore the emotional life of the scenes on an intellectual level, without fully letting it get to that raw emotional place that it ultimately ended up going to when you see the episode on air. I definitely needed time after the scene with Cedric [the Entertainer], to regroup before moving on. We actually only ended up doing two takes of that scene… For me, I’d been holding it in all week, and it just exploded to the surface once the cameras started rolling.

TVLINE | I definitely want to talk about Calvin’s part in this story, but first, I want to touch on what was revealed about Calvin and Tina. Meg, why was it important to reveal that the Butlers also suffered a miscarriage?
DELOATCH | One of the most important parts of this to me is how common miscarriages are. Of course, not everyone has experienced it, but in a room where people start talking about it, it is a little stunning how many people have actually had the experience. And so it was important to show that it’s not specific to just one person. It is a universal, human thing that occurs. A lot of us don’t talk about it because society can make you feel like you shouldn’t, and this was a couple who had been through it. 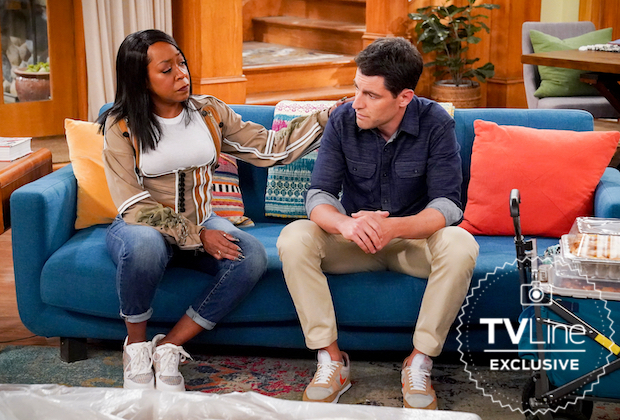 TVLINE | The episode dedicates equal time to what Dave is going through. And so much of Calvin and Tina’s story is about how reluctant Calvin has been to grieve. Why were those two things important?
DELOATCH | When I had my miscarriage, I didn’t realize initially how hurt [my partner] was. You’re focused on yourself. And when I was able to open up and grieve with him, it was an awakening to recognize that it’s not just something that happens to a woman. It may be our bodies, but it’s not just our baby. So it was really important to me to show, and to recognize, that Calvin grieves the loss of that child as deeply as Tina, and not only is that right, it’s fair of us as a society to acknowledge that men are just as invested in these pregnancies as the women carrying them.

TVLINE | Beth, were you at all surprised that the pivotal scene in this episode is not between Gemma and Dave, but between Gemma and Calvin?
BEHRS | I absolutely loved that Meg wrote this pivotal scene for Calvin and Gemma. I think one of the things our show does best is highlight the fact that blood doesn’t have to make family. There’s a strength and a bravery that I think Gemma and Calvin share as characters, and the reveal that they can come together to understand the silent grief the other has endured is so powerful. I also loved that there wasn’t one joke in the entire scene… I was so moved by the fact that we gave this trauma the weight it deserved.

TVLINE | During the backyard memorial, Tina sings Michael Jackson’s “Gone Too Soon.” What was it about that song that made it right for this particular scene?
DELOATCH | It’s one of my favorite songs. Michael Jackson wrote it for Ryan White, the young boy who died of AIDS many years ago, and I just feel like the lyrics of that song are just so beautiful. It’s about treasuring a life that didn’t get enough time to flourish.

TVLINE | I’d be remiss if we ended without discussing the Amazon product placement here — which, let me preface by saying that I completely understand it’s a part of the business. But was there any concern that it would distract from the highly emotional story you were telling here? 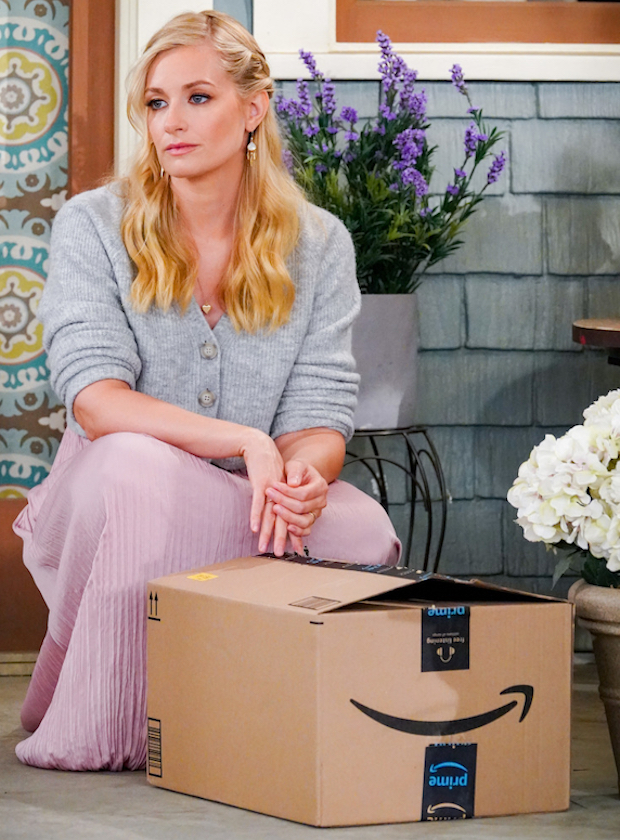 DELOATCH | You know, I hate to sound like I’m a sellout, but I use, and have been using, the Alexa device for years. Alexa wakes me up every morning, Alexa gives me my reminders as I start my day… so, to be honest, when they came to us about the integration, it was not hard for me to integrate it. I know there might be some writers who are purists and say no, but Alexa is part of my life, so it’s no big deal. Also, it wasn’t like we had to do a commercial.

TVLINE | I purposely worded my question as not to wake up my own Amazon device…
DELOATCH | This was news to me, but in order for us to do this [integration], we had to edit the episode and send it off quickly, because they had to do a digital footprint on the episode so that we didn’t wake up Alexa devices while people were watching the show. Even when we were doing notes [over Zoom], some of the producers have to work from home, and Alexa kept interfering! I always laugh and say my Alexa is very noisy. Like, “I’m not talking to you!” [Laughs]