The Butlers and the Johnsons are bonded for life following the events of The Neighborhood‘s Season 4 premiere.

In a moment, we’ll ask you for your thoughts on Monday’s season opener — the CBS comedy’s first episode produced under the leadership of new showrunner Meg DeLoatch, who was tapped to succeed original series creator Jim Reynolds following the conclusion of Season 3 — but first, a terse recap:

Dave’s genealogical deep dive revealed that he and Calvin are more than just neighbors — they’re sixth cousins, once removed. Calvin was reluctant to believe it — “Ancestry stuff isn’t science,” he declared. “It’s voodoo!” — but he was forced to accept his new reality once family elder Aunt Desiray (played by The Color Purple‘s Margaret Avery) validated the results of Dave’s ancestry search.

As Desiray had been told, back in 19th Century Tuscaloosa, Ala., a Black Butler impregnated a white Johnson — and their love child was Calvin’s great-grandfather. But what Desiray didn’t reveal, which Dave and Calvin soon discovered, was that Calvin’s great-grandfather was forced to forfeit his family’s land at the turn of the 20th Century, when banks made it impossible for “certain people” to own land. In turn, said ownership was transferred to the Johnsons, who paid nary a penny for it. 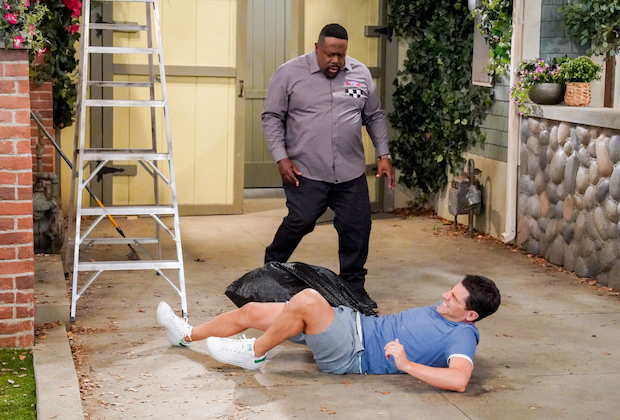 A guilt-ridden Dave spent the rest of the episode reckoning with his family’s racist past. Gemma tried to assure her husband that Calvin wouldn’t blame him for centuries-old atrocities, but Calvin was clearly upset, and Dave felt the need to make it up to his couz. He offered Calvin reparations in the form of Dodgers tickets — second row, behind home-plate — and nearly broke his back cleaning out the Butlers’ gutters.

Calvin ultimately chose to forgive Dave. After talking it over with Tina, Calvin realized that he shouldn’t direct his anger at Dave for a part of their shared family history that neither of them has the power to change. He also acknowledged that Dave is a good person, running down a list of all that Dave had done (or had tried to do) for their community since he and his family first relocated from Kalamazoo.

“You marched with us when Trey got falsely arrested,” Calvin recalled. “You even ran for office to help this neighborhood. You got your ass kicked, but you ran! To me, you’re more of a second cousin than a sixth cousin.”

Speaking to TVLine ahead of Season 4, DeLoatch hinted that the season opener would “harken back to the pilot,” as well as reflect on how far Dave and Calvin’s relationship had come. She also wanted the episode to show “that we are all more alike than we are different, and that we are a lot closer together than sometimes ideologies and politics may make us think.” So, did she succeed? Grade the episode via the following poll, then drop a comment with your full review.