Election Day is just around the corner on The Neighborhood, as the CBS comedy’s next episode (airing Monday, Nov. 23) picks up where last season left off.

Last spring, Dave launched his campaign for city council in an attempt to unseat do-nothing incumbent Isaiah Evans (played by Wayne Brady). Following this week’s Black Lives Matter-focused premiere, the series will follow up on the election with an episode that was intended to close out Season 2, before the pandemic forced the Cedric the Entertainer-led sitcom to halt production in March.

“It has elements of the original finale [we wrote for Season 2], but [the extended hiatus] gave us the opportunity to take a step back and figure out how to tell the story we wanted to tell a little bit more clearly,” showrunner Jim Reynolds tells TVLine. 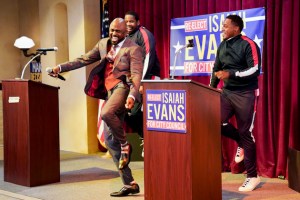 The episode, which pits Dave against Councilman Evans in a last-minute debate, shares some parallels with the recent presidential election. “Dave, who is an idealist, is running his campaign with a philosophy of truth and integrity, and dealing with real issues,” Reynolds says. “He’s coming up against an opponent who is willing to play a little bit dirtier and is not as concerned with letting the issues get in the way of a good show.”

Press PLAY on TVLine’s exclusive sneak peek above to watch Dave try and intimidate Evans before the big debate, then scroll down to learn what else The Neighborhood has in store for Season 3.

COUPLES THERAPY | “Dave and Gemma have been going [to therapy],” Greenfield previews. “When it’s revealed to Calvin and Tina, they’re surprised. They’ve never done it [and] it intrigues Tina, so [Calvin and Tina] go, much to Calvin’s chagrin,” in the Nov. 30 episode. “He feels it’s all Dave’s fault that he has to go.” 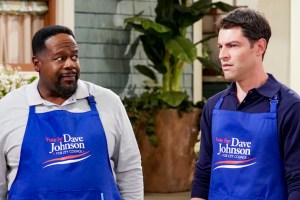 ROAD TRIP | After a pair of ladies’ trips — first to Las Vegas, where Gemma and Tina attended Magic Mike Live, then to Wine Country, where Tina was mistaken by a hotel concierge for Mary J. Blige — the comedy will send Dave and Calvin off on an adventure of their own this December. “We thought it’d be fun to put them together on the road to a classic automobile show,” where Calvin is set to show off his vintage convertible, Reynolds shares. “Dave’s a believer that it’s really more about the journey than the destination, and Calvin’s a destination kind of guy. We get to see those two different approaches come up against each other, and [what happens] when Calvin decides to try and embrace Dave’s approach.”

ESCAPE ROOM | The most hardcore fans may recall a time or two where Dave has said that he’d love to bring Calvin to an escape room. This season, the dream becomes a reality. “I don’t think it’s anything that viewers have ever focused on, but the writers thought it was a really funny pitch, then it turned into part of an episode,” Greenfield says. 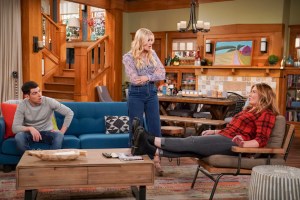 GEMMA’S SISTER RETURNS | Dave and Calvin’s escape room visit coincides with Brittany’s arrival. “Brittany is going to show up having turned her life around and started her own business, and we’re going to see how that plays out,” Reynolds shares. “Dave’s still going to be skeptical [of her]. Gemma will be, too.”

WHAT THE CLUCK?! | “There’s an episode coming up where we try to get the neighbor’s rooster to be quiet,” Greenfield shares with a laugh. “In a time that’s been tense in the real world, it’s been so much fun just coming to work every day and do these classic sitcom setup episodes. It feels like the correct tone for the time.”