Smart and savvy people of TVLine-dia, do you not like good things?

Of course you do. So then why aren’t more of you watching ABC’s Queens?

The show — a drama about a reunited 1990s girl hip-hop group — is averaging 1.9 million total viewers and a 0.5 rating in the coveted 18-49 demo, with Live+7 DVR playback factored in. But its most recent episode grabbed only 1.03 million viewers and a 0.23, per same-day numbers.

Those figures tell me that more of you need to indulge in a little self-care. And by “self-care,” I mean an hour a week in which you allow the combined talents of Brandy, Naturi Naughton, Nadine Velazquez and (sometimes) Eve to wash over you in a wave of soapy delight. Is your hesitance because you think, now that the Season 1 finale is upon us — it airs Tuesday at 10/9c — that you’re too far behind? You’re not. Let me catch you up real quick.

But in-group fighting and a slew of personal demons led to the Bitches’ break-up, and the ladies hadn’t really spoken to each other until an outrageous up-and-coming artist named Lil Muffin (real name: Lauren; played by Pepi Sonuga) sampled one of their old hits in her new song.

Buoyed by the fresh track’s popularity, the Nasty Bitches reunited — but the intervening years didn’t tamp down any of their animosity, issues or flat-out interpersonal beefs. In addition, all the drama from their non-music-industry lives got added into the mix: drug addiction, closeted homosexuality, failed relationships, cheating husbands who need brain surgery, long-lost birth mothers who show up and seem like the best thing ever but then turn out to be vicious ex-cons… y’know, the usual, run-of-the-mill, accumulated personal paraphernalia of women north of their 20s. 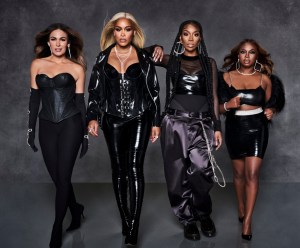 But. BUT! Where the show could’ve gone full late-seasons Melrose Place or Melrose Place the Revival: Somehow Less Melrosier, with catfights and bitchiness and just plain mean people being just plain mean to each other, Queens managed to strike a fun balance between barbed jabs and buttered-toast warmth. The group’s members, along with Eric and Lauren, truly are a family. So when one character accidentally ripped out the bejeweled unicorn horn she had surgically implanted in her forehead, her friends were there for her! When another character got shot because a different character’s crazed ex-husband had Big Feelings and chose violence, her friends were there for her!

[Psst: If you’re someone who already watches/loves Queens, here’s a little finale scoop from Brandy. (And thanks for reading down this far!) You know that Eric/Naomi proposal that ABC teased hard in the promo for the episode? “You might have to wait and see what she’s thinking about that,” she says, chuckling warily. “I don’t know, that might be pushing Naomi a little too [much]. You’ve got to carry her a little slow, don’t take her too fast.” Speculate in the comments!]

To recap: Queens is fun and good! The music slaps! The overall feel is supportive-go-girl-greatness, and who couldn’t use a little more of that — delivered via rap battle like a shot of caffeine to your soul — in their lives?!

Do you have thoughts about ABC’s Queens? Hit the comments and let us know!