Throughout Season 2 of Starz’s Power Book II: Ghost, ardent viewers of the series have made their wishes known to showrunner Courtney Kemp: Bring back Naturi Naughton’s Tasha.

Indeed, Naughton — who started playing Tasha St. Patrick in Ghost‘s preceding series, Power, and carried the role over to the spinoff — is now known to Queens fans as Jill aka “Da Thrill,” a member of a ’90s female hip-hop group that’s recently reunited. All of the members of the Queens, formerly known as the Nasty Bitches, have a lot going on, and Jill is no exception: She’s a devout Catholic and newly out lesbian who is in recovery from substance abuse.

In this week’s episode, Queens‘ Jill had a pretty big run-in with her ex-girlfriend, Tina. And on Sunday’s Power Book II finale, Naughton’s Tasha — who is in the witness protection program (long story) — appeared when her son, Tariq, pulled some strings to have his little sister delivered to their mom.

TVLine chatted with Naughton about pulling double duty (which, because of scheduling on both series, was “not an easy feat,” Kemp adds) and about whether Powerverse fans can expect to see Tasha again in the future.

TVLINE | There’s so much emotion in the song we hear Jill rapping at the end of the episode, and it’s so different from Da Thrill’s usual style. It’s not softer, but it’s maybe… wider? Talk to me about what the song says about her evolution so far.
She did start at one place, being this closeted lesbian rapper who’s super hard-core hip-hop, in your face, nastier than the nastiest. And at the end of the season, you do get to see a more vulnerable side of her. And like you said, it doesn’t mean that she’s softer. It just means that she’s more connected to who she really is.

And the song that she for Tina… I think it’s Jill’s way of recognizing that she’s hurt some people, particularly Tina, and it’s also Jill’s way of saying, you know what, I want to be better than I was 12 episodes ago… I love the fact that the music for Jill is more connected to her sense of self. It’s more in tune with her emotions, as opposed to what people expect her to be. Her tone and her style and her flow has always been fire. That’s never going to change. [Laughs] 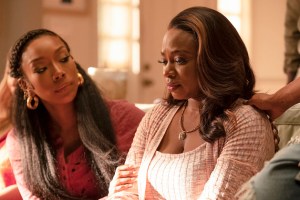 TVLINE | Do you think she’d considered that Tina might have moved on with someone else? It seems like it comes as a real shock to Jill during the episode.
I know, right? Isn’t that always the case though? Like, when your ex is like shocked that you’ve moved on? Hello, what did you expect me to do? Stop living? It’s very naïve of Jill to think that. Not only does she break up with this woman, break her heart, leave her husband for this woman, and cheat on her with another woman, what did you expect?

Jill is, maybe she’s shocked, but I think it’s moreso sobering, humbling, when you have to eat a taste of humble pie or something like that. I think she’s just realizing, like, “Oh, wow. I thought I might have a second chance.”

… I think Jill was just more so realizing that she had to deal with the decisions that she’s made in her life, and sometimes, that’s a little unpretty.

TVLINE | Might Jill move on, romantically, too this season? Or are we in a rebuilding period for her?
I can definitely tease and say that this might be a time for Jill to just sit down somewhere when it comes to love or relationships, because she’s made a bit of a mess. [Laughs] In literally one season, she’s had, like, three love affairs: one with her husband, one with her best friend/her next-door neighbor who’s also been her secret lover, and then one with a reporter who she had an affinity and an admiration for. 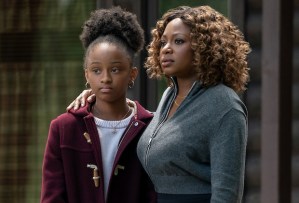 TVLINE | OK, let’s talk about your part in the Power Book II: Ghost finale.
I had lunch with Courtney [Kemp, Power creator] in L.A., and we just got together, and Dorothy Canton is one of our producers, so we had like a lunch. Honestly, I’ve built relationships and friendships with a lot of the Power family.

One of the things that we always said is that the reason why Tasha’s still alive is so that she can potentially come back. It’s always an honor to be on such a show like Power that I launched with Omari Hardwick, and now seeing, Michael Rainey, Jr. and the younger generation take it under their wings, and it’s flying higher than ever, it makes me super proud. I’m just happy that the OG Tasha got a chance to come through real quick. You might see her again.

TVLINE | When Tamika dropped Yaz off at Tasha’s, it seemed to me like Tasha knew Tariq was in the car, even though she couldn’t see him. Was that your understanding in the scene?
For sure. She’s constantly longing for her son. That’s been her partner. The way Power ended, Tariq and Tasha became partners — more than just mother-son — and that bond is unbreakable, which is another thing I love about how Courtney writes these characters and just the way all the writers exemplify the love that a mother has for her children. And I get tha,t because I was pregnant while shooting season 4 of Power.

And now I’m a mom, so I know we will go to great lengths to protect our children. So yes, to answer that. Her look of longing for Tariq is definitely in that moment, and she’s also thinking, “How do I get back to him?” I think Tasha’s always going to be figuring out like, “What can I do to get back to my baby?” That’s really her purpose.