When Diana sat down for dinner with her family in this week’s Power Book II: Ghost, she served up a steaming bowl of truth — and everybody got a heaping serving, whether they wanted it or not.

The Tejadas had barely settled down to their meal when Diana got caught in a lie, saying that she’d been at Zeke’s game earlier even though she definitely had not. Knowing that she was about to get in a lot of trouble, Diana decided to go public with everyone else’s falsehoods — inadvertently kicking off what series star LaToya Tonodeo jokingly calls the “nuclear dinner.”

Diana outed Cane as sugaring the cocaine that messed up their supply, “just so he could be the new connect.” An on-the-spot Cane then told Lorenzo that Dru didn’t kill Everett like he was supposed to — shocking Zeke, who hadn’t been aware that that was a plan in the first place. Then Diana put the focus back on her mother, saying she’d been staging her exit “from the game and from you, Papi” for weeks. A furious Monet countered that she knew Diana had been attending Tariq’s trial and that she’d been sleeping with him. 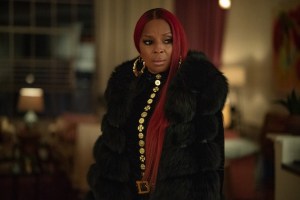 But by that point, Diana was on fire. “I ain’t the only one f–king somebody I ain’t supposed to, Ma!” Diana shouted, telling everyone assembled that Monet had been having an affair with Dante. “I’m sorry, let me clarify real quick,” Diana said. “I mean Zeke’s dad.” And then, Diana whipped out a copy of Zeke’s birth certificate, which showed he was born in 1998, not 2002 like he’d thought — news that could seriously mess up his future with the NBA draft.

Of course, we wanted to hear the inside story on that disastrous dinner straight from the instigator herself. Read on for Tonodeo’s thoughts about Diana’s long-simmering, highly entertaining rebellion.

TVLINE | What kills me is that Monet is not even thinking about Diana. She does not think she’s a threat in any way, right?
Exactly. She is underestimating her right now because, first of all, Monet has so much going on with Mecca — aka Dante — Zeke, Lorenzo, our dad coming home. She’s being pulled in so many different directions, which makes it a little bit cooler for Diana because she gets to move around and do things like lose her virginity. [Laughs] So, yes, like she is not under Monet’s thumb as heavily as she was before.

TVLINE | I can’t stop thinking about the fact that Diana is still a kid.
Yes.

TVLINE | And all of Monet’s kids have had to mature real fast —
Really fast.

TVLINE | So how much of what Diana is up to — including this episode’s outburst — is part and parcel of the growing-up process? Granted, it’s on a bigger, splashier scale because of this show and its circumstances, but how much do you think is just her teenage rebellion, for lack of a better word?
OK. That’s a good question. Well, definitely the sex stuff. That’s rebellion because, even in Season 1, Episode 5, Monet was definitely trying to build Diana’s confidence and not worrying about guys, especially Tariq. She reiterates it again in Episode 1 or 2, I believe, of this season. She keeps trying to tell Diana to focus on what’s important. “Leave Tariq alone, it’s not about that. You need to find a partner. It’s not about love or lust” or whatever it may be, but yet Diana is still a young girl so she’s like, “OK, Mom, yeah, yeah, yeah. OK.” And then she still does exactly what she wants to do, and she finds herself sleeping with Tariq and losing her virginity — and to the person that her mom said “He can’t love you like you want him to love you.” And she still rebels.

TVLINE | Let’s talk about the dinner in Episode 8.
She let it all out at the dinner. She cooks. She’s like, “I’m going to cook this dinner, and my parents are going to be there, my brother, and she’s trying to hold it in because she gave Monet the opportunity to want to talk.” [But Monet] brushes her off, So, Diana’s like ‘OK, fine. I gave her the opportunity. Here we go!” [Laughs] It’s described as the nuclear dinner… I don’t know how it’s edited or what we kept, but everyone just went off. Mary [J. Blige] throws stuff. I’m like, oh, my God. There was a moment, I don’t know if they’re going to keep this or not, but she jumped up out of her chair, and she didn’t do that before. And when she did, at that point I jumped, because she was coming for me! … It was so great. I really hope they keep that. [Editor’s note: They did.] I don’t know if they will or not, but yes it’s the nuclear dinner and we’re dropping bombs. Diana is telling on everybody. Everybody. Even Monet.

TVLINE | Do you think that the Diana of Season 1 would have been able to do that? Do you think that there’s like something that’s changed about her in the last season or so that made her able to do this?
Oh, my gosh. I definitely don’t believe that Diana would have been able to do this in Season 1. She was still pretty much trying to find her footing so much in Season 1. I think maybe what changed is the fact that at the beginning of this season, Cane was ostracized from the family, Dru was injured, and she found herself having to really step up and… realizing like, OK, I can’t really go to school right now. Let me channel all my ambition, all my intelligence into this family business, which is the drug game. So, maybe that kind of sparked something in her and gave her this little sense of confidence that changed her a bit, because now she’s going after it and she doesn’t really care what anyone has to say about it. [Laughs]