With your broadcast-TV favorites on holiday break, TVLine has been looking at how each network’s shows are stacking up thus far in the 2021-22 TV season. Having already sized up Fox, ABC, NBC and CBS, we now wrap things up with The CW.

Listed below is the average DEMO RATING for each series on The CW (including Live+7 DVR playback, since the networks do take that metric into consideration at renewal/cancellation time). Alongside that column you will find the TOTAL AUDIENCE for each program, as well as any noteworthy PERFORMANCE NOTES.

Each program’s RANK (far left) represents what is perhaps the most critical measure — how it is faring in the coveted 18-49 demo compared to other shows on The CW, since come springtime heads must roll to make room for shiny-and-new pilots. (Any ties in the demo were “broken” by total viewership, because I decided so.)

Note: As Midseason Report Cards go, The CW proved to be a bit of an odd bird, since some summertime scripted series’ spilled over a bit into fall, others started late…. So for clarity, the number of qualifying fall episodes for scripted shows has been denoted in a lovely light gray. 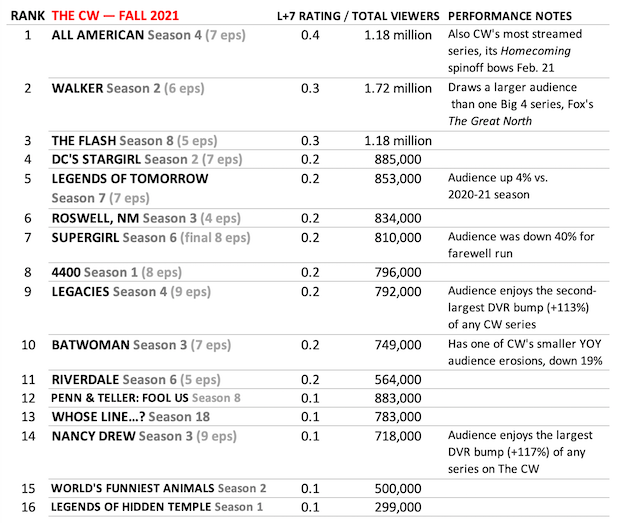 THE TVLINE BOTTOM LINE: Though Walker‘s audience slipped 30 percent vs. its noteworthy freshman run, it’s still putting up strong numbers for The CW. And All American‘s performance (both linear and via streaming) continues to be a touchdown, ergo the upcoming Homecoming spinoff…. The Flash hasn’t quantifiably faded as much as some assume, but the more “super” stories may be Stargirl (which dipped only a bit transitioning into the heat of fall) and Legends of Tomorrow (whose audience grew versus the spring/summer Season 6)…. Is anyone else agog that a nostalgia magnet like Legends of the Hidden Temple hasn’t clicked?… Midseason looks good, with the likes of Walker and All American to be joined by new seasons of Superman & Lois and Kung Fu — aka two of the network’s most watched series last season.

Which of The CW’s rankings surprises or delights you?