With your broadcast-TV favorites now on holiday break, TVLine is looking at how each network’s shows are stacking up thus far in the 2021-22 TV season. Having previously eyed ABC, NBC and CBS, next up is Fox.

Listed below is the average DEMO RATING for each Fox series (including Live+7 DVR playback, since the networks do take that metric into consideration at renewal/cancellation time). Alongside that column you will find the TOTAL AUDIENCE for each program, as well as any noteworthy PERFORMANCE NOTES.

Each program’s RANK (far left) represents what is perhaps the most critical measure — how it is faring in the coveted 18-49 demo compared to other shows on Fox, since come springtime heads must roll to make room for shiny-and-new pilots. (Any ties in the demo were “broken” by total viewership, because I decided so.) 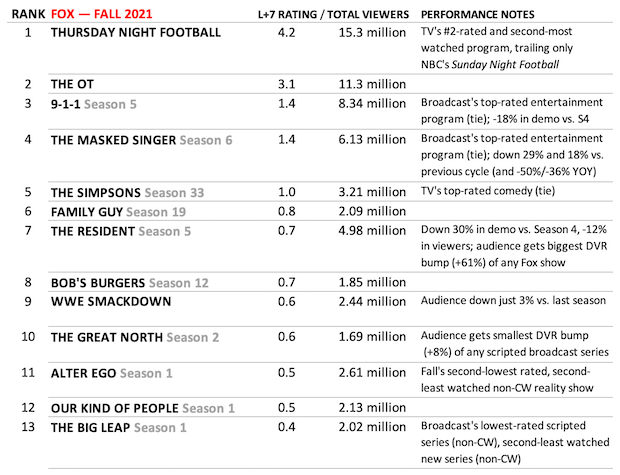 “This is Fox, and we’ve aired our last Thursday Night Football for at least a decade.”

Yes, Fox led the broadcast pack this fall in the demo (averaging a 1.39 with DVR playback), but with Prime Video claiming dibs on TNF starting in 2022, it will be curious to see what moves the network makes moving forward, having for a few falls now been able to take a knee two nights a week. Luckily, 9-1-1 isn’t showing as much erosion as its procedural peers, but there has to be some concern about Masked Singer‘s steady, steady decline. With The Big Leap and Our Kind of People both failing to move the ratings needle, Fox remains due for a big hit — will the mob drama The Cleaning Lady or the music-themed sudser Monarch muster any midseason buzz?

Which Fox ranking most surprises or delights you?