Going into Tuesday’s Season 21 finale of The Voice, we knew that it was going to be remarkable — and not just because, for the first time, a group (Team Kelly Clarkson’s Girl Named Tom) seemed likely to win. (In fact, the show’s mobile app accidentally announced them as the victors well ahead of showtime.) It was also noteworthy because — and maybe you felt differently — I don’t remember a season when I would’ve been as happy no matter which of the finalists came out on top.

Did I have my favorites? You bet I did, as surely as Ariana Grande couldn’t let go a contestant without tears. I’ve been high on Girl Named Tom since Episode 1. Did they ever even get a grade that was less than an A from me? But Team John Legend’s Jershika Maple stole my heart and dazzled my ears, too. (Could she have brought it any more than she did Monday night? Could anyone have?) And stage presence notwithstanding, there was no denying that Team Blake Shelton’s Wendy Moten has a voice for the ages.

Team Blake’s Paris Winningham kinda lost steam as the competition went on, and Team Kelly’s Hailey “She’s Only 14!” Mia was hit-and-miss overall, but I liked them, too — enough that I wouldn’t have wanted to throw anything at the TV if they’d won. Who actually did walk away with the title? As always, before we found out, we were treated to a showstopper of a show. Among its noteworthy performances…

Coldplay/BTS, “My Universe” | And we’re off. Our opening number mostly consisted of Chris Martin bopping around while the K-pop superstars appeared and disappeared around him on stage like especially glitchy Princess Leia holograms. And I’m sure it’s just me, but is this song… well, mega generic? 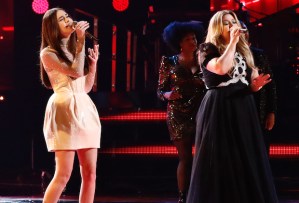 Duet With Coach
Hailey Mia and Kelly Clarkson, “Funny” — Hailey’s grade: B- | Kelly’s 14-year-old contestant  acquitted herself pretty nicely here for the most part, but singing next to her coach, it was hard to ignore how much richer the American Idol winner’s vocal was. Hailey’s good, her talent is just like… a dish that’s not 100-percent done cooking yet.

Walker Hayes, “Fancy Like” | I’m sure there was a way this number could’ve been a bigger hoot, but I’ll be damned if I can imagine what it is. From the lyrics — which left me as hungry as amused — to that laid-back choreography, this fun like oo. (See what I did there? Er, what I tried to do? No? Moving on… ) 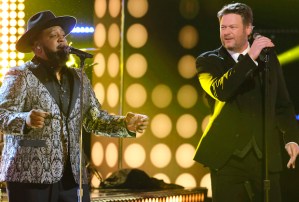 Duet With Coach
Paris Winningham and Blake Shelton, “Love Train” — Paris’ grade: B | Odd that Blake would team up with Paris on something other than a country song; we know that Paris does them — and well. Regardless, the O’Jays’ classic was a fine choice, especially for the guy whose moment in the spotlight it was supposed to be. Maybe it was just the plenitude of background singers, but this was a whole lot more enjoyable than Paris’ “Ain’t Nobody” Monday night.

Keke Palmer and Tori Kelly, “Christmas (Baby Please Come Home)” | The tag team’s number from Sing 2 was an absolute delight. Could their voices have complemented one another’s better? Not too sure why the Top 13 was on stage with them, though. I mean, it was nice to see everybody and all, but it wasn’t like you could pick out anyone’s voice from the cheerful noise. 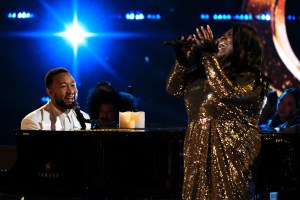 Duet With Coach
Jershika Maple and John Legend, “O Holy Night” — Jershika’s grade: A | It’s no small feat to outshine an EGOT winner, but for my money, Jershika did it. John sang as sweetly and smoothly as eggnog, but there’s just so much undiluted soul in Jershika’s voice, she took my breath away.

Ed Sheeran, “Shivers” | Season 21’s Mega Mentor, as charming as he is talented, utterly commanded the stage all by himself, bringing to bear on his clap-along a focus and intimacy that made me think, “Wait, is this too personal? Should I not be listening?” Loved it, though as he might’ve advised a contestant, it’s not a bad idea to open your eyes now and then. 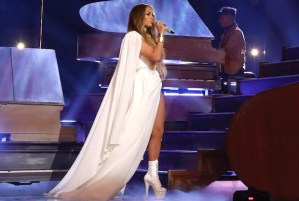 Jennifer Lopez, “On My Way” | Interesting. J.Lo was napping on the piano before it was time for her to sing her pretty Marry Me ballad. At first I couldn’t figure out why she was wearing curtains, but then it was made clear: She was going to be used as a screen on which to project scenes from the movie. OK, this number kinda went nowhere… unless you count up a flight of stairs to… well, again, nowhere. Team Legend’s Joshua Vacanti could’ve made this epic.

John Legend and Carrie Underwood, “Hallelujah” | Jeepers, these two sounded as fantastic together as chocolate and peanut butter taste together. Not a surprise, I guess — that’s why they’re superstars. It was just lovely to hear a duo so well-matched. This wasn’t the Leonard Cohen classic, by the way, it was a Christmas song from her 2020 holiday album. 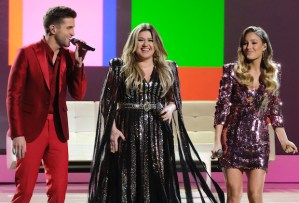 Duet With Coach
Girl Named Tom and Kelly Clarkson, “Leave Before You Love Me” — GNT’s grade: B | OK, first of all, I want to live in the living-room set in which the trio and their coach began their performance. That said, it wasn’t GNT’s best. It was loose, which was nice, but not terribly tight, and everybody seemed to have trouble staying on their mic. Not awful or anything, but regular performances like that wouldn’t have left us anticipating their victory. 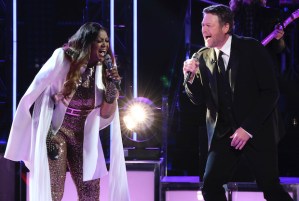 Duet With Coach
Wendy Moten and Blake Shelton, “Just a Fool” — Wendy’s grade: B+ | Eh. This started a little iffy for me, but it sure gained momentum as it went along. Eventually, we got those mammoth, magnificent Wendy vocals we were looking for. Well, listening for. Me, I’m gonna remember Wendy for her “Over the Rainbow” and “I Will Always Love You” instead.

Alicia Keys, “Old Memories” | Oh, how I’ve missed the former Voice coach in her swivel chair. Here, she gave a performance that suggested we check the dictionary to find her picture next to the word “perfection.” Not to be mean, but wow, this was a zillion times more compelling than, say, Coldplay, and she didn’t need any holograms whatsoever to hold our attention.

Ariana Grande and Kid Cudi, “Just Look Up” | That Ariana sang like a dream was hardly a shock. But that she did so while wearing what looked like a giant yellow shower curtain kinda was. I mean, it was a pretty shower curtain, but still… huh. About halfway through the ballad from Don’t Look Up, Kid Cudi showed up, rapped in mellow fashion, then kinda wandered around Ari. Curious.

And in the moment of truth…

So, what did you think of the outcome? The finale? The season? Answers below, if you please.