You could tell that the Season 21 premiere of The Voice was going to show you a good time from the start, when returning coaches Blake Shelton, John Legend and Kelly Clarkson teamed up with first-timer Ariana Grande to turn “Hold On, I’m Coming” and “Respect” into the most rollicking mashup of songs since Olivia Newton-John and The Tubes went “Dancin’” in Xanadu. From there, we were treated to some by and large extremely good Blind Auditions and discovered not only what kind of panelist the new kid on the block would be (technical, technical, technical) but also what her schtick was (a button that plays “thank u, next” when she needs a rival coach to put a sock in it). What did you think of her addition to the Fab Four? Sound off in the comments after we review Monday’s advancing contestants.

Girl Named Tom (Team Kelly), “Helplessly Hoping” — Grade: A | This trio of inordinately camera-friendly siblings gave me chills — and earned a four-chair turn from the coaches — with harmonies that were so freaking flawless, they could’ve made Peter, Paul & Mary go, “Da-amn! When did Simon & Garfunkel have kids?” We’ve heard louder, more showoffy auditions in the past, sure. But lovelier? I don’t thiiink so.

Katie Rae (Team Ariana), “The Bones” — Grade: C | I know you’re going to grumble over that meh grade, but per the TVLine poll key, a “C” is defined as “just OK,” and to me, that’s all this 35-year-old’s take on Maren Morris was. The three-chair turn hit the notes just fine — Kelly even likened her low ones to “sizzling butter” — I just didn’t get anything from it. (Also, I may be dead inside. TBD.) 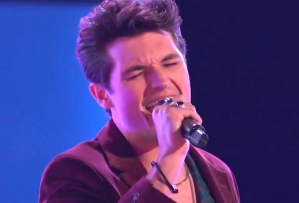 Peedy Chavis (Team Blake), “Heartbreak Hotel” — Grade: B | Sure, there was an element of gimmickry to the Elvis enthusiast’s cover: He remained so true to the King, right down to his mannerisms, that Ariana said she wished she had heard more of the 19-year-old himself in his audition. But his vocal was solid and his performance, spirited enough to leave Blake (and me) “fired the hell up.”

Jonathan Mouton (Team Legend), “Leave the Door Open” — Grade: A | After starting his Blind with an ear-catching theatrical flair, this son of a Motown background vocalist proceeded to reveal through his runs what “sizzling butter” actually sounds like. The cancer survivor was nothing short of dazzling, in the moment and so polished, he shone. Definitely more of a standout than his two-chair turn suggests, wouldn’t you say? 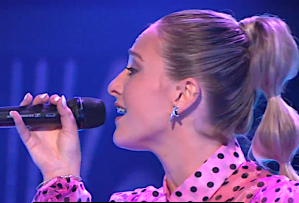 Katherine Ann Mohler (Team Ariana), “We Don’t Have to Take Our Clothes Off” — Grade: A- | First of all, props to this 22-year-old nanny for keeping a straight face as she reimagined Jermaine Stewart’s ’80s dance hit as a stripped-down ballad. Second of all, even bigger props to the two-chair turn for doing so with a strong, nuanced vocal that was nothing short of pristine. I see some Sia in the Ari fan’s future…

Jack Rogan (Team Legend), “House of the Rising Sun” — Grade: B- | I fear inexperience will get the better of him down the road. But in his first performance for an audience bigger than the “hundred grandmas and grandpas” at the nursing home where he works, this adorkable 18-year-old won over Kelly and John almost immediately with a haunting tone that didn’t so much knock you out of your seat as make you want to perch on the edge to listen more closely. 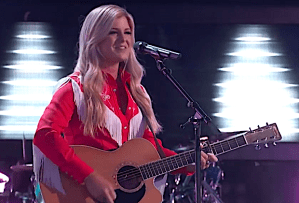 Kinsey Rose (Team Kelly), “Cowboy Take Me Away” — Grade: A- | So soaring and crystalline were this 35-year-old Nashville vet’s vocals on her Dixie Chicks cover that Kelly went so far as to use her Block on Blake. Good move, too: You could almost hear the sunshine pouring out of Kinsey’s throat (even if John dinged her for being slightly pitchy). Country through and through, she’ll go far, whether Blake has to steal her later to get her there!

Vaughn Mugol (Team Ariana), “The A Team” — Grade: B+ | If springtime had a sound, it would be this three-chair turn’s voice. A 27-year-old Texan from the Philippines, he tackled Ed Sheeran’s hit with the sweetness of a morning in May and the precision of an architect drawing a blueprint out of notes. The patients to whom the registered nurse sings at work must get awfully delightful mini-shows. 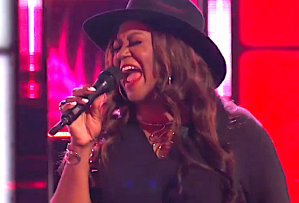 Wendy Moten (Team Blake), “We Can Work It Out” — Grade: A | A total pro, this 56-year-old had a hit in the ’90s with “Come In Out of the Rain,” then bided her time as a backup singer. Beyond ready to return to the spotlight, she swiveled all four coaches’ chairs with a rendition of the Chaka Khan version of the Beatles classic that was so powerful and energetic, it was a wonder she never ran out of gas. (Note: She never, ever did; she must have reserve tanks!) By the time she was done, I was as exhausted as I was impressed. “That was Top 3 Blind Audition for The Voice,” exclaimed Blake, “for all time.”

So, what did you think of the premiere? And Grande on the coaching panel? Grade ’em in the polls below, then hit the comments with more detailed reviews.