Only a few days have passed between the events of Power Book II: Ghost‘s Season 1 finale and the Season 2 premiere, which aired Sunday. But my, much has changed.

(And I’m not just talking about how Yaz now looks like a damn teenager, seemingly overnight.)

Prof. Reynolds is dead. Tasha is gone. Monique is shaken. Up is down and right is left and [checks notes] MacLean is giving Saxe a glow-up? Read on for the highlights of “Free Will Is Never Free.”

MONET’S NEW STRATEGY: BASKETBALL FTW! | When Tariq wakes from a nightmare about killing Jabari Reynolds, he immediately deletes the professor’s text from his burner. His morning freak-out is interrupted by Yaz yelling from other room; when he runs out to see what’s up, we learn that he’s staying at Estelle’s, and there’s a fire in the kitchen. I know I should be more taken aback by the flames issuing from the stovetop, but MAN Yaz isn’t a baby anymore, is she? Anyway, Tariq puts out the fire and soothes Yaz, who tells him that Estelle’s drinking is getting worse.

Meanwhile, things at Casa Tejada are tense. Monet is on edge, thinking that she’s going to be the target of retribution for killing Rico. And Dru is mad at his mom for her role in his getting shot last season, but I get it: His injured arm and hand are so messed up, he can’t even draw, and that is a huge bummer. Elsewhere, Cane makes friends with a high-powered connect named Mecca (Rescue Me‘s Daniel Sunjata), but we’ll have more on that in a minute. 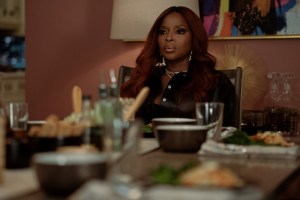 Diana and Monet go shopping at some high-priced boutiques, and they buy out the place. But then they make a beeline for Monet’s bar and dump all of the goods — huh? — so they can fill the shoeboxes and bags with product. (Ah!) They reload the car and have a close-call moment with the cops, but a savvy Diana saves the day. “I handled it just like you taught me: Smile a little, flirt a lot, make them feel like they can get it,” she tells her mom, who is very proud.

Monet’s clearly been thinking a lot about her kids and their future, because later in the hour, she announces, “I got a plan for us to get out of the life.” Dru’s shooting was a wake-up call, she continues, and so she’s going to have Zeke sign up for the draft this year — instead of in the future, as he’d planned — so that he can start raking in those sweet endorsement deals sooner rather than later. “He’s our exit plan,” she explains, adding that they’ll follow the basketball phenom to whatever team signs him. “So we’re all going to be working for Zeke?” asks a clearly not-psyched Diana. “He’s your new product,” Dru realizes. Later, the Tejada kids discuss how maybe they‘ll start calling the shots for themselves. 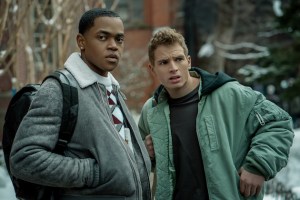 MEET CONGRESSMAN SWEENEY | Worried about Yaz and wanting to talk with his mom, Tariq calls Davis MacLean and asks for help finding Tasha — whom, you’ll recall, is in the Witness Protection Program somewhere and is, by design, incommunicado. Tariq’s call happens to come just before MacLean takes his new law partner, Cooper Saxe, on a shopping trip in preparation for a makeover. (Side note: This may have been my favorite scene in the entire premiere.) MacLean eagerly accepts the job, thinking about the cash it’ll bring in. Saxe, who’s actually going to do the legwork, is less excited. “He already killed one parent,” he says.  “Now… he’s going to take out the other?”

Actually, now he’s going to attend a hunting weekend with Brayden’s family, an event that redefines the term “d–che canoe.” One of the honored guests is Congressman Sweeney (Gilmore Girls‘ Scott Cohen), who attended Stansfield with Brayden’s dad and who is an absolute, racist jerk to Tariq upon meeting him. When he learns out Tariq is Ghost’s kid, Sweeney brings up “ugly rumors” about his drug operation; without missing a beat, Tariq raises the question of the opioid epidemic in Appalachia and asks, “So how much money are you taking from Big Pharma, Congressman Sweeney?”

When they all eventually go on the hunting trip, Sweeney takes a shot that just misses Tariq’s head (!) and Tariq (understandably) Is. Outta. There.

WHAT’S MECCA UP TO? | Eventually, the cops find Jabari’s body, and Ramirez’s gun, and a detective who has a history with Carrie ambushes her into IDing his corpse. The detective thinks the GTG pool murder and this one are related, and he suspects she may be involved.

News of the latest death rocks campus. An upset Lauren goes to see Tariq and they wind up kissing, but he’s called away when Cane wants reassurance that Ramirez’s weapon will throw the police off their scent. ‘Riq says to shut up and trust him, but even he is spooked when Monet texts and wants him to come over for dinner. “Just act normal, don’t say nothing,” Cane advises. So that’s exactly what Tariq does, and it seems to mollify the queenpin; she gives him the drugs she’s dressed up in fancy bags, and orders him to sell them. Then he and Diana have a close moment, but Monet loudly and hilariously interrupts them, and I love her a whole lot. 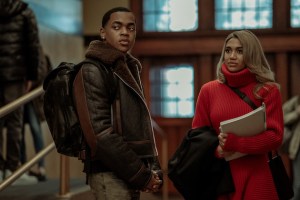 Elsewhere, Mecca constructs an opportunity for Cane to get some revenge on a GTG guy that previously tried to kill him but escaped. Cane breaks the man’s neck with his bare hands, then talks his way into moving weight for Mecca. THEN, Cane visits Monet and announces that he has a new connect.. but she’s not interested at all. Outside, a hidden Mecca watches the exchange.

Back on campus, Tariq gets a call on his burner and hopes that it might be his mom. But instead it’s the NYPD detective we met earlier, who’s dialing the last number Jabari texted. Oops! The cops trace the number to the Stansfield campus, and even the normally cool-headed Tariq seems quite kerfuffled by this turn of events. 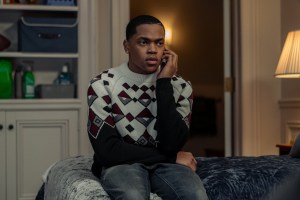 BROTHERLY LOVE | This seems like a good time to tell you that Rashad Tate has been wearing sweats and sacking out on his brother’s couch, feeling sorry for himself and the demise of his gubernatorial aspirations. His brother gives him some tough love and instructs him to find a new means to the end he desires. So Tate cleans up and heads straight for Democratic kingmaker Steven Ott’s house, where the power broken reluctantly agrees to a deal: If Tate can dig up some dirt on Sweeney, Ott will bless Tate’s efforts to take Sweeney’s Congressional seat as his own. So Tate gets his police officer brother to log into the NYPD database so Tate can do a little perusing of Sweeney’s record.

And hey, remember that brother MacLean mentioned to Tasha at the start of last season? We meet him toward the end of this episode, when Davis visits his bro, Theo, in prison. (Hey, it’s Redman!) “I’m getting you out,” MacLean says, hinting that Saxe is going to help, even if the former assistant U.S. attorney is not yet aware of that fact. “You ain’t dying in there.”

Did that premiere feel jam-packed to you, too? Grade the episode via the poll below, then hit the comments with your thoughts!