Just when we were beginning — well, starting to begin — to wrap our heads around the fact that original Station 19 cast member Okieriete Onaodowan has left behind the series and his role of Dean Miller, ABC released a video (sniffle) tribute (dabs eyes) to his beloved (sob) character.

“The pass device,” Jaina Lee Ortiz’s Andy explains therein, “is an alarm sewn into a firefighter’s gear. It automatically goes off if we’re motionless for too long.

“The sound will haunt you,” she adds. “It means someone has fallen. It means what we thought was a rescue is probably now a recovery. It means we’re about to say goodbye to one of our own.” 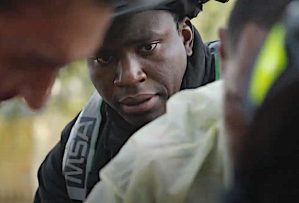 As you likely already know, Onaodowan’s Dean succumbed to injuries sustained in the line of duty during Thursday’s Station 19 (recapped here). By the time he arrived at Grey Sloan in the subsequent episode of Grey’s Anatomy (recapped here), it was already too late.

If it takes any of the sting out of the actor’s departure, the decision to exit was his. Per our sister site Deadline, the Hamilton alum asked to leave at the end of Season 4 but agreed to return for part of Season 5 to give Dean’s story some closure.

In bidding adieu to the show and its viewers, Onaodowan sent a message that sweetly sounded like something his alter ego might have said. “Thanks to the fans for showing Dean so much love,” he wrote. “I hope he has inspired you to change your world for the better. Be the change!”

To check out the tribute — have that tissue handy! — press PLAY on the video above.