It felt at first like just another zippy episode of Station 19: sexy thanks to Maya and Carina, whose lovemaking prowess her wife accidentally rated aloud, funny thanks to Sulivan, who thought his Fire Zaddy promo pictures made it look like he was selling cologne, and real thanks to Travis and Emmett, who requested that his boyfriend’s wedding picture be moved out of the bedroom. That, or “I’ll just continue making eye contact with your dead husband every time we have sex.”

“Things We Lost in the Fire” started off extra dramatic, too, as Vic, who owing to a family curse was reluctant to celebrate her anniversary with Theo, learned that Dean planned to move to Oakland and start a Crisis One program there. But then things took a turn… a sharp turn for the heartbreaking. After the station was rocked by the heavily promoted blast that we’d soon learn was the result of a nicked gas line, Dean asked Vic to move to Cali with him. “I don’t want to leave you,” he admitted as the first-responders raced to the scene. “Come with me.”

What with her life and her boo being in Seattle, though, Vic couldn’t go. “I figured, but… I asked,” he said, as if reassuring himself that hey, he’d tried. 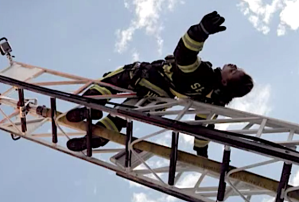 ‘THAT’S A COWARD’S WAY OF SAYING I LOVE YOU’ | On a residential block still shaking from the explosion, Vic wound up atop a sky-high ladder spraying water on the blaze below. Suddenly, a live wire snapped and struck her, leaving her hanging backwards a quarter-mile in the air. (More? Less? Regardless, scary as bleep.) Immediately, Dean and Theo leapt into action, Miller being first up the ladder. There, he gave Vic upside-down mouth-to-mouth and got her breathing again.

Wait, it got tenser. Once everyone was back down on the ground, Dean left Vic in Travis’ care. “I love you,” she called after him as he set off on his next act of heroism. “You’re my brother, and I love you, OK?”

Oy — “You’re my brother.” The three words Dean really didn’t want to hear. Sadly, he replied, “I love you, Hughie.” 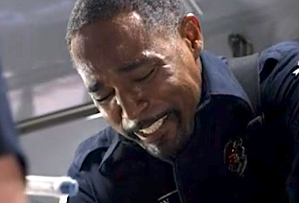 Then, while evacuating neighbors, Dean discovered that a house had been knocked off its foundation. There could be gas building up inside, so no one should open the… kaboom! Andy’s captain Aquino was impaled, Beckett got the hot air knocked out of him, and Dean… Poor Dean was so gravely injured that it appeared Ben would spend the whole ride to Grey Sloan performing CPR on him. Would Dean pull through? Andy was sure of it. He had to. She couldn’t live in a world in which Pru became another her: a little girl who was abandoned by her mother and whose father was taken from her by a fire.

The episode ended with the ominous tone of a flatline. But we wouldn’t find out for sure whether Dean or someone else died until the subsequent episode of Grey’s Anatomy (recapped here). Read what Okieriete Onaodowan has to say about the funereal plot twist here.