Warning: As the headline suggests, the article below reveals which character dies in Thursday’s Station 19/Grey’s Anatomy crossover.

Now that we know the identity of the Station 19/Grey’s Anatomy character for whom Thursday’s crossover episodes would be the last, we kinda want to go back to when we were still in the dark. Why? Because the casualty turned out to be Station 19 regular Okieriete Onaodowan’s indefatigably lovable Dean Miller.

TV's Most Heartbreaking Deaths of 2021 (So Far)

In “Things We Lost in the Fire” (recapped here), the first-responder was critically injured in an explosion while evacuating civilians from a block rocked by a burst gas line. By the time he arrived at Grey Sloan — despite Ben and Jack’s best efforts — he was gone. (At least before his demise, he got to save the life of longtime crush Vic and kinda tell her that he was in love with her.)

“It’s been a pleasure being Dean,” says the Hamilton vet, who had been with the Grey’s Anatomy spinoff since its 2018 debut. “I have Shonda Rhimes, Stacy McKee, Krista Vernoff, Paris Barclay and ABC to thank for allowing me to bring him to life. I am grateful I got to work with the most loving, kind and dedicated crew in network TV.

“And most importantly, thanks to the fans for showing Dean so much love,” he adds. “I hope he has inspired you to change your world for the better. Be the change!” 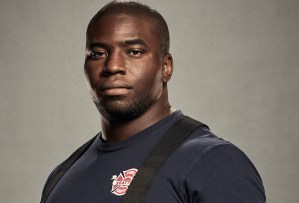 For her part, Vernoff, who is showrunner for both series, sounds as choked up as anyone else in the audience. “I am a better artist and human for having had the opportunity to work with Okieriete Onaodowan,” she says. “I am heartbroken by the loss of Dean Miller and that I no longer get to write for Oak.

“Oak has an expansive spirit and was ready for and craving new artistic horizons — and I truly can’t wait to see what he does next,” she continues. “It will be powerful, it will be deep, and it will be courageous, because Oak is all of those things.”

Grey’s creator/Station 19 EP Shonda Rhimes, meanwhile, tweeted a photo of her and Onaodowan at Hamilton‘s Richard Rodgers Theatre, saying, “What a pleasure it has been to go from watching you grace the Broadway stage to witnessing Dean in action on screen. Wishing you the very best!”

Your reaction to Onaodowan’s exit? Are you sorry we’ll never get to see Dean and Vic as more than friends? Who will get custody of baby Pru? Hit the comments.