There’s got to be a mourning after. And in the second half of Thursday’s tear-stained Station 19/Grey’s Anatomy crossover, it began, even as the aftershocks of the devastating gas line explosion threatened to take out yet another firefighter. Who emerged from the hour with a pulse — and who emerged with a whole lot more? Read on…

‘TAKE GOOD CARE OF HIM, OR I’LL COME BACK AND KILL YOU… BUT SERIOUSLY, I HAVE THE TRAINING’ | No sooner had Winston and Cormac wheeled Farouk in for his secret surgery in “Bottle Up and Explode” than the aforementioned blast rocked Grey Sloan, sending Megan rushing in to the ER to hold her unconscious son’s hand and hum the cartoon themes that had always soothed him. At the same time, Owen, who was already dealing with the fact that the vets he was trying to help blamed him for Col. Davis’ death, suffered a flareup of his PTSD. So while Cormac supported Megan through an anxiety-inducing delay in closing Farouk after his operation, Teddy was reaching out to her husband, who by the hardest reminded himself that he had been taught how to handle his PTSD. But the vets… “Nobody’s helping them with anything,” he said. “I need to help them.” Finally, Farouk was stitched up, at which point his mom allowed herself to break down. Concerned at the way that she had kept her brother in the dark, Cormac told Owen what had been going on. So at the end of the episode, he and Teddy were able to reinforce to Megan that “we are your family, you and Farouk, and you never have to do this alone. OK?” A-OK. 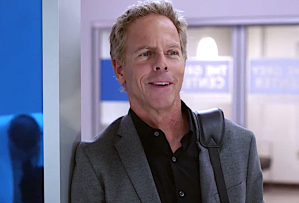 ‘HOW MUCH DO YOU KNOW ABOUT MY SUPER SECRET PROJECT?’ | In Minnesota, Meredith and Amelia brought in to consult none other than Koracick. Which seemed like a good idea, no? He could be annoying, but he was also brilliant. So why was David so appalled by Tom’s arrival? “He was not part of our deal,” David complained to Mer. Yes, but why did he care? Turned out Tom — oh, Tom! — had slept with David’s daughter. Not that that was why he was holding a grudge, he insisted. “It’s not the sex,” he told Mer, “it’s the gloating!” Yeah, can totally see that happening with Koracick. When Mer reminded David that she had complete autonomy over her team, he backed down… at which point she cheered him right back up. “Maybe,” she chuckled, “Koracick will be a bust and you can fire him. Wouldn’t that be fun?” 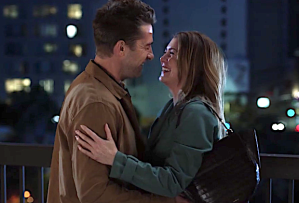 And as our 60 minutes ticked down to seconds, Mer met Nick for dinner, and sparks flying that made the stars look pale by comparison, they kissed in giddily cinematic fashion. They weren’t the only ones performing successful chemistry tests, either. If it was any clearer than Amelia and Kai wanted each other, they’d have been passing each other notes in the lab that said as much. But their potential hookup looked like it might be cut off at the pass when Kai said that they were married. “To this lab,” they hastened to add. Ha. 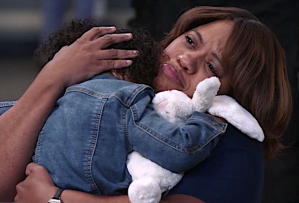 ‘HI, I ALMOST DIED’ | After Vic was brought in to Grey Sloan adorably high on morphine, Bailey’s heart dropped. A subsequent aid car didn’t have its sirens on, so she knew that it contained someone who had died. It was, of course, Dean, not Ben. (Read how it happened here.) But Miranda would soon be tempted to kill him herself when he revealed that he’d promised to take Pru in case anything ever happened to her dad. “I didn’t think he was ever going to die!” Ben insisted. Later, Bailey admitted that her reluctance to take in Pru stemmed from her desire to have a little girl. She knew she’d fall head over heels for the baby. What would she do if the tot’s grandparents then swooped in and took her away? No matter how badly Bailey’s heart would be broken, her decision was made when Andy arrived at the hospital with Pru. When the toddler hugged Bailey, it was all over. The Bailey/Warren family had a new member. 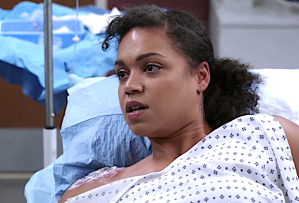 In other developments, Travis broke it to Vic that Dean had died, a crushing revelation that gave her the equivalent of a heart attack. Travis couldn’t fathom what his BFF was going through. She’d already lost her fiancé and now Dean? “I can’t imagine having to do it again,” the widower cried to Levi. Elsewhere in the episode, Richard and Winston bonded a bit while Maggie was out of town tending to her ailing adoptive father, and all that death made Jo worry about what would happen if she died. “I’ve got Luna,” Link assured her without even a moment’s hesitation. “I’ve got her.” So, what did you think of Part 2 of the crossover? Ben’s surprise for Bailey? Mer and Nick’s swoony kiss? Koracick’s comeback? Amelia and Kai’s flirtation? Hit the comments.