Feeling in the dark about what’s going on with Evil‘s Sheryl, after that Season 2 finale? Grab a creepy antique doll and get in line.

“I don’t know a lot,” says Christine Lahti of her character’s trajectory, which has gone from good-time grandma to head of a demonic order in the space of the Paramount+ drama’s most recent season. Showrunners Robert and Michelle King have given her a few hints “that Sheryl is going for broke in terms of power, and empowerment, and she’s not actually doing it in the most healthy ways,” she says. But someone’s got to break the diabolical glass ceiling, right?

“She’s been held back and held down for so long by men, bad men — ‘demons,’ she calls them, but I think they were… demonic in their toxic masculinity — and now she is on a mission to be empowered, have power over people who have hurt her, including Leland,” Lahti continues. And following the show’s cryptic season finale (read a recap here and get Katja Herbers’ and the Kings’ thoughts on the episode here), this seems like as good a place as any to hop into our conversation with the Emmy- and Oscar winner, which covered infernal roofies, a Law & Order: SVU flashback and a time that a certain word for male genitalia just wasn’t going to cut it.

TVLINE | What can you say about where Sheryl is headed, after everything we saw this season?
She’s now the head of this this sigil, the Tim Matheson character made her now the new head of this sigil, and I think that she is going to be in some kind of power battle with Leland. That’s the hint that I’ve gotten. But honestly, I don’t know. I’m getting very excited about the idea of her finally just feeling her oats, feeling her power.

TVLINE | That’s so interesting to me, especially because in the scene where she was first brought into this organization, that was done very much against her will, right?
Oh, yeah. 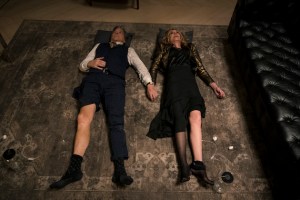 TVLINE | But other times, she seems very much into the power aspect of being part of this cabal or whatever it is.
Well, the drug scene, when [Edward] slipped her that roofie, was really, really painful and horrible. It was really painful to do, even just thinking about it brings tears to my eyes because I just… it was so awful. These men were so awful. But what happened afterwards is — yes, she got some blood of Tim Matheson’s character, they exchanged blood, so there is something of whatever was in his blood that is now affecting her. She doesn’t remember any of that, that’s the way I was able to play this character. It was a blackout, she doesn’t remember that abuse. Otherwise, I don’t think that she could move forward at all… They also gave her this brown goop. It was explained to me that it’s like going to a spa. It’s filled with youth serums, and vitamin B, and all kinds of electrolytes, and she feels fantastic on that, which is why she keeps going back for that. So, whatever is in that is making her feel really, really empowered. So, I think it is a combination of the blackout of the actual blood transfusion with this evil guy, but the good news is that she feels really good now.

TVLINE | I definitely don’t want to belabor the scene where she was drugged, but it was so effective in that many women have been in a similar situation where everyone’s laughing and having a good time, and maybe there’s alcohol involved, and all of a sudden it turns on a dime and you realize that you’re alone and maybe in danger.
I think it’s important to talk about, and I’m so happy that it resonated for so many women. I think all of us have been in a similar position, or witness a similar thing happen to a friend, or heard about it. It is so rampant and needs to stop. So, I think any dialogue around this is really important. 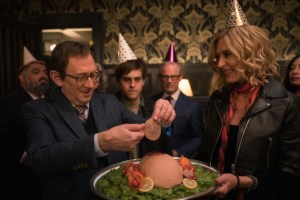 TVLINE | Despite whatever’s happening with Sheryl, her granddaughters still seem to be top of mind. And Robert King tweeted that the interaction between Leland and Sheryl, where she says she’ll cut his d–k off, might have come from you in some way?
[Laughs] Let’s see how that happened. I was very concerned that in my rise to power, which I think is really important to Sheryl, that she would never do anything that would hurt her granddaughters… I think that the only way she will move forward with this guy, with Leland, even though I think that she’s using him, is that to ensure that he would never harm any of them. I think I did suggest that line, “If you ever do anything to harm my granddaughters, I’ll cut off your d–k.” Before it was at Paramount+, when it was at CBS, the line was, “I’ll cut off your penis.” All of us thought no one would ever say that. I think that was the moment we heard that, “Oh we’re going to be at Paramount+?” and we got to say “d–k,” and we were so happy. [Laughs]

TVLINE | I bet. Your character is now in possession of three of creepiest props on the show, and that is saying a lot. So, you have the shrunken head, and you have those two very creepy Eddie dolls, right?
Yeah. [Laughs]

TVLINE | Do the dolls’ eyes follow you across the set?
Wow. [Laughs] Wow. You know, I hadn’t noticed that, but I think I will now whenever I see them, thanks to you. I’m going to be freaked out. They have a lot of power for Sheryl. I think it’s all positive, you know. It’s like a meditation that she does with them. They remind her of her higher self, of her better self in a way, not to always just react with anger — which she has a lot of — but to try to be more thoughtful and respond later, and not so immediately.

It’s all positive for her right now. Now, this whole putting the cross on the floor in the chalk, that whole thing, I’m not quite sure what all that is. Except I do know that when she said, “Use me, I’m ready,” for me acting, it was such a sense of, “I haven’t been used, I haven’t been able to use my full potential because of men, because of the way I’ve been treated by men, because I allowed myself to be held down, but also, that I have been diminished and held back,” and the real sense of, “I have so much to give, and I have so much potential, and I just want to be able to use that and realize that.” That was a really moving scene for Sheryl, that it was, [Exhales] “Finally, I get to have some power.”

TVLINE | Some of our readers point out that there’s also a Virgin Mary statue in Sheryl’s room. It does not seem like something she would have.
You know, I honestly didn’t even notice that. I don’t think she’s in any way religious in that way. I don’t think she would be. I think she was a former Catholic, and she raised her daughter that way. But I think she’s completely over all that s–t, and certainly in its patriarchal treatment of women, she’s not there. If [the statue is] there, maybe it was there when… maybe it’s her daughter’s leftover, maybe it was just something that they had in their garage. But I don’t think it’s something that she gives a s–t about. 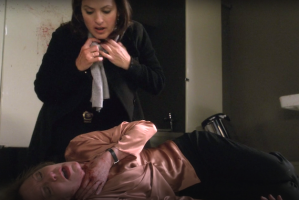 TVLINE | On an unrelated note: I cover Law & Order: SVU for our site, and I’ve been watching that show forever. I’m wondering: What was more gross to shoot: when your character died of a slit throat on SVU or that I.V. scene in Evil?
The intravenous scene where I was drugged was, by far, much, much hairier, much more frightening to shoot than getting my throat slit. Because [SVU] was just technical, you know. I was like, “OK, now I’ve got to put all this makeup on and then pretend to stop breathing.” I mean, it was sad, but for me, I didn’t have to really go to that place you know, experiencing that powerlessness. I died. [Laughs] I was dead. It was over. But in the other scene, I had to really experience that complete loss of control and power you know, not even being able to move or even scream, but being conscious and awake was really horrible.