Evil‘s very first episode ever established two certainties: The Devil has an insidious presence in our world, and there is an affectionate little something-something sparking between David Acosta and Kristen Bouchard.

But for two seasons, any attraction between Mike Colter and Katja Herbers’ characters was kept in check by their circumstances. David was a Catholic priest-in-training. Kristen was a married mother of four. Even in last week’s episode, which included an emotionally frank conversation in which Kristen and David agreed that they might’ve been a couple if they’d met at a different point in their lives, nothing untoward happened.

Sunday’s Season 2 finale, however, changed everything. On the same day that David was ordained as a fully fledged man of the cloth, Kristen came to him in crisis. She tearfully asked him to hear her confession, which allowed her to finally share the secret she’d kept all season: that she’d killed serial murderer Orson LeRoux and gotten away with it. As a shocked David absolved her of her sins, a sobbing Kristen fell into his arms. Moments later, the pair were kissing. (Read a full recap.)

There was no way we were going to let that major development pass by without some input from the people who made it happen. So read on to hear what showrunners Michelle King and Robert King and series star Katja Herbers had to say about the episode. 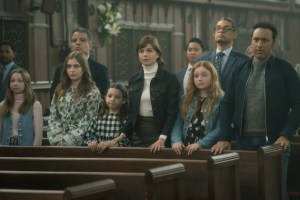 TVLINE | In the previous episode, David and Kristen had a very vulnerable discussion, which also took place in his bedroom, but were able to pull back from taking it farther — talk to me about why things are different this time around.
MICHELLE KING | It partly comes out of the intimacy that’s created from her confessing to him and speaks to, frankly, how seriously the show takes religion: that a sacrament would be the most intimate moment of the series and that the characters, especially Kristen, might confuse the warmth she feels with the release of being able to confess this sin with love or sexual desire.
ROBERT KING | For Kristen, the whole year has been a pent-up anxiety about what she did, even when she was in denial about that, even when she thought she had been, first of all, forgiven by the police for the worst reason, white privilege, and then, second, when she feels she has been released from the supernatural aspects of evil. She still feels the person she respects the most, which is not necessarily God to her, but David. She just needs to be forgiven that, so that she doesn’t do it again, and that’s why she brings the ice ax.

And then, I think Michelle is right, just the exhaustion factor with all that pent up. And I don’t think the show thinks it’s necessarily a good thing, what happens, because it is not the right moment. It really should not. You know, if you commit to something you commit to it. 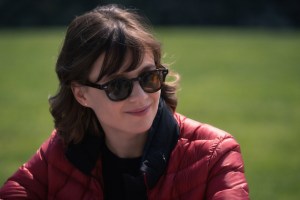 TVLINE | When did you find out the Kings were going to pull the trigger on David and Kristen?
HERBERS | Maybe five days before we started shooting the episode or something. But for me, that wasn’t the most daunting part. The confession and the guilt that comes out that she was let off by her friend, that’s mostly what I was thinking about. I just found that kiss very beautiful. I don’t know where it’s going to go in the third season, but this is clearly not them flirting in this scene. This is actually her showing everything that she is and that she has done, and him accepting her for who she is. I find it very beautiful. We’re not playing around with the chemistry that they’ve had. We’re now actually…it’s sort of love at that point, if you can lay it all bare and somebody accepts you like that. I thought that was just very beautiful. [Pauses] Now what? [Laughs] 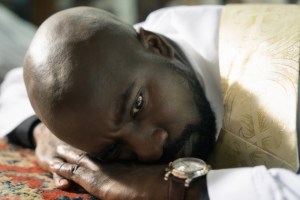 TVLINE | Throughout the season, we repeatedly hear that the side of good needs more warriors, and that David needs to become a priest. Now he’s a priest, but… How will what happens at the end of the episode affect the battle between good and evil as the show continues?
MICHELLE KING | That’s something we want to explore in Season 3, very much. If a priest who possibly has sinned, how does that impact his ability to do his work?
ROBERT KING | I mean, the whole episode is about these temptations and these images he can’t get out of his head, and then, he kind of gives in to it, maybe because of love. There probably is true love there but still, they are seen as temptations that needed to be resisted. So, it can’t be good.

TVLINE | Was there discussion about which character would initiate the kiss?
MICHELLE KING | You know what, that’s such a good question. The intention is very much that it is mutual.
ROBERT KING | Michelle was there when we were shooting it. So, Michelle, by the way, did they do it different ways or did they always do it that way?
MICHELLE KING | I don’t recall. I think it was always pretty much that way. The actors are so talented and treated that scene in particular so carefully and with such support for each other. I mean, because it’s a very difficult scene, especially for Katja. And they both handled it with such grace.
ROBERT KING | Alethea Jones, who directed the elevator episode earlier in the year, did this. And the blocking of it, I thought it was particularly spectacular.
HERBERS | We choreographed it in a way that I could end up in his arms like that. The hug being just slightly too long, and then us both sensing that the energy had shifted. Then I really like that choice that neither of us is doing it. Neither of us is a victim of the situation. We’re both in this for the exact same amount.

TVLINE | The thing that struck me is that Kristen has been very alone all season, both physically — Andy hasn’t been around — and with her secret. The relief of having someone she cares about truly know what’s been going on with her was a palpable thing in that scene.
HERBERS | Yeah. But I don’t know…she wouldn’t have kissed someone else at the end of this. That’s because it was David.

TVLINE | The question I have verbatim on my list here is: “Edward, Sheryl and Leland: WTF?” I truly do not know what’s going on there. Illuminate anything you can, please.
ROBERT KING | [Laughs] To me, this goes to the secret of what the 60 are and what that sigil map is about. I think what Sister Andrea says is true, there are 60 families, almost like these are crests of the family, and they’re not genetically connected. When one person dies out, they need to replace them, but that replacement has to be someone who will take on the mantle of whatever that sigil means. We’re going to find out more specifically what the sigils mean next season, but at least at the moment, she has deciphered the fact the way succession happens is through cannibalism.

Almost everything with the demonic side of the script is a bad parody of the Catholic side of the script. So, there’s eating the body and blood of Christ on one side, eating the body and blood of the demon before you on the other. So, it’s all flipped on each other. Demonic Edward, he’s not the same sigil as Leland. There are two sigils, so there are two kind of parts of an order of a house. So, they’re always on the make for who’s going to replace them.
MICHELLE KING | Same union, different local. [Laughs]