Warning: This post contains major spoilers from Evil‘s Season 2 finale. Those who have not watched, get thee behind me! (But bookmark the recap and come back when you’ve seen the episode.)

Evil‘s Season 2 finale ends with a development the show has been building toward since its very first episode, an event so charged and game-changing that fans have been split on when — or even if! — it should ever happen.

Yep… I’m talking about David’s ordination. After all this time and a whole lot of healthy doubt, Mike Colter’s character takes his holy orders and becomes a fully fledged priest in Sunday’s hour.

And in case you were reading along and thinking that maybe I meant David and Kristen actually got together in this week’s episode after two seasons of flirting, deep affection and one flat-out conversation of how they’d be together in a different universe? Yeah, that happens, too. THAT HAPPENS, TOO.

Read on for the highlights of “C Is for Cannibal” (and make sure to check out my post mortem chat with showrunners Michelle and Robert King and series star Katja Herbers).

‘THE LIFE IS TOO HARD’ | We come in on the last step before David is ordained: his questioning by various representatives of the Catholic Church. Sample question: “Can temptation always be resisted?” (Um, dude, did you see the previous episode?) After Monsignor Korecki brings up David’s sermon on race, which David corrects as to being “on God’s love,” the older priest says there’s just one more interrogator to go: Renee, who is there via videoconference.

He’s surprised to see her; she seems a little flustered as she says it was a last-minute request from the Church, who wants her to interview prospective priests for any liabilities they might present. Sexual indiscretions, financial indiscretions, all the fun stuff. Renee very clearly states that she’s only interested in hearing about past “oopsies!” that might place the Church in a potentially litigious position (subtext: Don’t say anything about our romp in the rectory!), and he answers that he has nothing to declare. Things relax a little; they both are happy to see each other. But she’s got one more inquiry: “Are you doing this for yourself? Or for my sister?” The answer is both, and he’s honest about it. “Make sure you’re doing it for yourself, only yourself,” she counsels. “The life is too hard.”

MEAT MITCH | Know what else is tough? Not thinking about sex when all everyone does is remind you how you’re never going to have any, ever again. So naturally, thoughts/memories/fantasies of being with Renee float through David’s mind as he, Ben and Kristen kick off their next case. They meet with Mitch, a college student who thinks he’s under demonic attack because he’s a vegetarian who suddenly started craving raw meat and now kinda wants to eat human flesh.

Mitch assures them he hasn’t acted on the urge, but it’s getting harder to ignore — particularly when he’s dissecting a human cadaver in class. Also, he’s started dreaming that he’s being chased through the halls of the campus building that contains the cadaver lab. He’s not sure what’s after him, but he knows that if it catches him, “I’ll give in to it,” he tells the trio.

When Ben and David check out the building, they find an older, out-of-use section with fresh blood on the floor and graffiti that reads “3 am haunt.” Ben posits that it’s just some Hell Week nonsense, but they decide to return later that evening to investigate. Because first: It’s time for David’s ordination bachelor party! 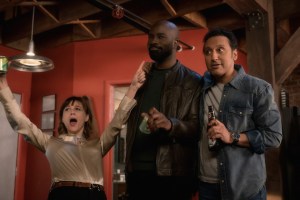 IN WHICH SISTER ANDREA IS, AGAIN, A BADASS | With thoughts of naked funtimes with Renee — and Kristen? — still strobing through his brain, David makes his way to Ben’s that night… and realizes that what he thought was going to be a tiny thing with his immediate co-workers actually is a big surprise party with pretty much everyone in his orbit. Kurt, Sister Andrea, Sheryl, Kristen’s daughters? They’re all there! Highlights include Lexis telling Kristen that she smells “like a dead body,” Sheryl and Monsignor Korecki discussing Leland and Kurt confessing his demon-boop!ing to Sister Andrea, who advises him to get baptized before the malevolent being drags him to Hell. Y’know, typical party chat.

At 3 am, David, Kristen and Ben return to the school building. They quickly realize that the aforementioned “haunt” is just a challenge for idiots who want to spend a night sleeping in a morgue drawer. So they quickly leave, but David lags behind to check out a lecture hall. Inside, he finds what appears to be a giant, pulsating, Venus flytrap-looking entity, but which turns out to be a winged beast snacking on a corpse. 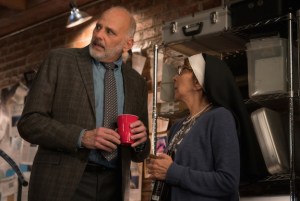 The thing chases David as he runs away, and it is truly terrifying. But David makes it back to the modern section of the building, and his co-workers, safely. When he turns around, the creature is gone. Sister Andrea later advises him that now that he’s closer to God, his spooky visions are going to become much more corporeal — and therefore deadly. In fact, she shows him, she’s got a mark on her arm from battling something with a tail the week before. David laments that he just wanted a normal life. “This is how things really are,” she says flatly.

Later that night, the same demon that chased David attacks Sister Andrea in her sleep. It descends from her ceiling, straddles her and licks her with its forked tongue. But the nun Is. Not. Having. Any. Of. That. Thank. You. She manages to grab a crucifix on her bedside table, stab the demon and then prevent it from immediately escaping by grabbing its foot and holding on tight. “You will not hurt David!” she cries. I love this woman.

WHAT A HEEL! | What about wannabe cannibal Mitch, though? Thanks to a call from his roommate, we learn that he chewed through the zip ties with which he voluntarily lashed himself to the bed and is headed to the cadaver lab building. So Kristen, Ben and David run there and find the young man yelling about how he doesn’t want to eat the dead body in front of him, but “he” wants him to. That’s when our trio notices that the corpse, a bald man, has a demonic sigil tattooed on his scalp.

Kristen’s psychological assessment of Mitch is interrupted by Leland, who is officially on board as a representative of the Church. She flies into a rage and calls David. Leland counters by calling Monsignor Korecki. After Leland makes it seem like she’s throwing her shoes at him, the monsignor gives Leland the win and lets him proceed with Mitch. So after they both hang up, Kristen very calmly removes one of her high heels and repeatedly slaps Leland upside the head with it. (Side note: This is a very satisfying scene.) Her last blow makes him bleed. “Go get yourself help, Kristen!” he shouts. “This is me with help, Leland,” she replies (ha!), then takes her time putting her foot back into the shoe before she slowly walks away.

‘THE PRIME CUT’ | Let’s wrap up this plot before we get to the rest: So what’s up with Mitch and the sigil? After consulting Sister Andrea, David and Ben learn that in order for the leader of a the demonic house to guarantee his successor, “he needs to be consumed. Eaten.” This comes into play when Mitch shows up at Leland’s place saying, “Something’s wrong with me.” Quite the contrary!, Leland assures him, ushering him into a party where the corpse he wanted to nosh on is laid out on the dinner table like the main course. Other people — including Sheryl — are there, cheering Mitch on. “The prime cut, all for you,” Leland says, carving off the man’s sigil and serving it to the college student on a plate.

Also of note: Sheryl approaches Leland at the party with a knife in her hand. “If you ever hurt one of my granddaughters, I’ll cut off your d—k,” she promises, patting his crotch with the blade a couple of times to drive home her point. To what does she refer? Read on. 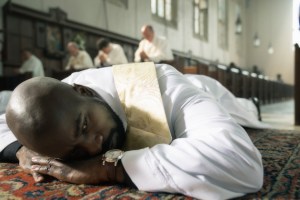 KRISTEN CONFESSES | David’s ordination day arrives, with Kristen and her girls and Ben in the pews to witness it. David’s sex thoughts are there, too, popping up during the part of the ceremony in which the new priests lie prostrate on the ground. But it all goes as planned, and in the end, David becomes Father Acosta.

Leland stops by Kristen’s pew afterward to give Lexis a piece of paper that simply says “daffodil.” Kristen is incensed that he’d go anywhere near her kids, and questions Lexis about how well she knows him. Lexis admits that he’s been coming by her school, and they’ve been chatting, because he was so lonely after breaking up with Sheryl.

Kristen drops the girls at home (where Lexis opens the pop-up book we saw Sheryl put in the closet weeks ago, and we see it has “daffodil” written in the back cover — eep). Then Mama Bouchard grabs her ice pick and plans to go do some more evil-eradication. 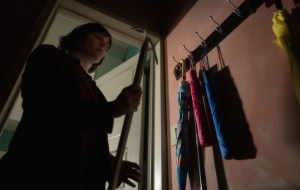 But she doesn’t. Instead, she winds up at David’s room, where she shakily explains everything that happened and how “earlier tonight, I was on my way to kill him.” David doesn’t believe her… until she pulls out the ice pick right and shows him. He’s (naturally) concerned, but then she asks if he’s allowed to hear confession, now that he’s ordained. He says yes, so she wants to confess right then and there.

So she kneels on a pillow while he sits in a chair, and they begin. She starts to cry right away, talking about how she’s trying to be a good mother and wife. Then she starts full-on sobbing as she tells him about how she killed Orson LeRoux and got away with it. “The cops, they knew me, and they just let me go!” she wails, gasping for air as she tells David that she’s truly sorry and doesn’t want to kill anyone else.

David holds her to him — of course he does, they’re good friends and she is IN CRISIS — and he’s on the verge of crying, too, as he leads her through the Act of Contrition. He absolves her of her sins, and she sags against him, still weeping so hard. “I can’t show my face,” she says. “I’m ashamed.” But eventually, she is able to meet his eyes, and they hug, still overcome.

But then sometime ineffable changes between them. She stills. They pull back and look at each other, then they both start moving their faces infinitesimally closer together. They kiss, pull back to make eye contact, then kiss again. And they don’t stop as we go to black and the episode ends.

Now it’s your turn. What did you think of the finale? Grade it and the season as a whole via the polls below, then hit the Comments with your thoughts!