The following contains major spoilers from the Season 4 premiere of ABC’s The Rookie.

2021 in Review: The 41 Most Shocking Cast Exits Announced This Year

Following a rollout of promos, episodic photos and a poster that had fans fretting about the fate of a conspicuously MIA character, The Rookie showrunner Alexi Hawley told TVLine that the Season 4 premiere would “almost immediately” confirm the fate of Officer Jackson West, who was played by original cast member Titus Makin.

Picking up shortly after the events of the Season 3 finale, which ended with bride- and mom-to-be Detective Angela Lopez being kidnapped from her wedding venue by Sandra “La Fiera” De La Cruz, the season premiere opened with Sergeant Grey and others reviewing security cam footage of Lopez and West being shoved into getaway cars. Jackson, shown only from the back and played by a stand-in, resisted being stuffed into a trunk just enough for La Fiera’s goon to put a bullet into his back — as Grey and ther others watched the footage in horror.

From there on, the team’s mission was two-pronged: to find and rescue Angela (who had been whisked away to a compound in Guatemala, where La Fiera planned to keep the WesLo baby once born), and to hunt down the L.A. local who ended Jackson’s life. 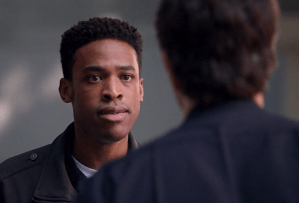 “What I can say is that Titus [Makin] was not coming back to the show,” Hawley told TVLine earlier this month, “so we needed to do the best that we could to honor the character who’s been so primally a part of the show.”

Hawley did not elaborate on the nature of Makin’s departure. The young actor had been with the ABC procedural since Day 1 as Officer Jackson West, son of Internal Affairs CO Percy West, and in February he was named TVLine’s Performer of the Week. Makin, who also has a career as a soul/funk singer (under the name Butterfly Ali), has been absent from social media since mid-June and he apparently is not doing any exit interviews.

Makin marks The Rookie‘s third major exit in three seasons. Near the end of Season 1, Mercedes Masohn left the series when Captain Zoe Andersen was shot by a gang leader, and succumbed to her wounds. And between Seasons 1 and 2, Afton Williamson — who played Nolan’s original TO, Talia Bishop — parted ways with the show after leveling allegations of sexual harassment and racial bullying (though a third party investigation eventually found no unlawful or inappropriate behavior); it was subsequently established that Bishop had left the LAPD for a job at the ATF.

“It’s heartbreaking,” Hawley said of the end that Makin’s character met (especially on the heels of a season in which Jackson was saddled with/suffered under a racist TO), “but I didn’t really have a choice. He wasn’t coming back, and because of the way we set things up with the [Season 3] finale, there was just no way to tell that story without Jackson…. But we lean really hard into honoring how he was the heart of the show, and it was definitely impactful for us to have to deal with that.” 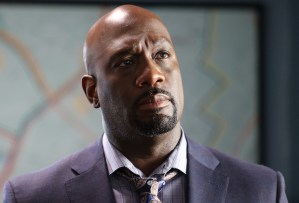 Coming out of that gut punch of a season-opening reveal…. Gray and Chen stayed back in Los Angeles to ID, locate and arrest Jackson’s killer, a 17-year-old whom Gray chased and privately cornered, but then cuffed instead of gunned down in revenge. Wes meanwhile made a “deal with the devil” (a crime boss played by Graceland‘s Brandon Jay McLaren), agreeing to be his crooked lawyer in trade for intel on Angela’s whereabouts.

Because the DEA was hamstrung by “politics” and unable to intercede, Nolan, Bradford and Harper leaned on a past CI’s associate (played by Scandal‘s Joshua Malina) to slip them into Guatemala via helicopter and outfit them with weapons. From there, Nolan semi-surreptitiously sought out and stole the architectural plans for La Fieria’s compound, though that proved to be a big ol’ waste of time(/excuse for a newly minted P2 to tag along). Instead, after Wes was purposely scooped up at the airport by crooked police and delivered to where Angela is being held, they opted for “Plan B.” After he was signaled with what sounded like fireworks outside, Wes injected Angela with something to trigger contractions. When she in turn got hurried to the hospital, Harper (dressed as an orderly) greeted them with a wheelchair (and guns), while Bradford in an ambulance T-boned and gassed their police escort.

Inside the hospital, Harper gave Angela the “antidote” for what had triggered the contractions, after which they and Bradford made a beeline for their exfil helicopter. La Fiera gave chase, gun a-blazing, but Angela spun around and put several bullets into her adversary. The three then “convinced” Malina’s character to begrudgingly make a second stop, to pick up Nolan and Wes.

Because when Angela was rushed to the hospital, Wes was thrown into a separate car and driven to a remote location to be executed. Luckily, La Fiera’s henchwoman was very chatty and overly dramatic, giving Nolan enough time to catch up to and sneak up on both her and a second goon. A brawl ensued, in which Nolan KO’d the woman by heaving her against a tree and then delivered a knockout kick to the goon who had Wes pinned down. They then joined the others on the helicopter, and….

… cut to THREE MONTHS LATER, and a welcome home party for new mom Angela and her and Wes’ baby boy. Yet despite the gathering’s festive nature (and Lucy’s overdone gift basket), Angela clearly has something on her mind. We then see her later at Jackson’s graveside, mourning her fallen colleague… while cradling the newborn son she has named after him.

What did you think of The Rookie‘s return, Jackson’s heartbreaking death, the “Chenford” sleepover, and the happy-ish time jump?