THE SHOW | The Rookie

THE PERFORMANCE | It is a thing to watch a TV character and his portrayer shift into a whole other gear after two-and-a-half seasons. And that is exactly what happened when Makin’s Officer Jackson West stood up to TO Doug Stanton.

When the team’s plan to get the goods on Stanton’s very bad behavior appeared to get cut off at the knees, Sgt. Grey invited West to stand down. The rookie, though, said that “without hesitation” he was willing to risk more trumped-up blue pages — and thus his future in law enforcement — by keeping an ever-watchful eye on his TO. “I don’t want a career if it means making way for cops like Stanton,” he explained, Makin selling every word.

After begging Stanton for a second shot, West resumed riding with the problematic veteran officer. Soon enough, though, a confrontation with a Mexican forced West’s hand, and he interrupted Stanton’s imminent assault of an innocent. Stanton roared that West was now “done” as a cop, Daddy in IA or not. But what happened next caught us, and the TO, quite off guard. “You know what, dumbass? My dad doesn’t ‘work for’ IA, he runs it,” West fired back, Makin instantly assigning a new level of maturity and boldness to his character. “So if you’re coming for my job, I’m coming for yours. I am done tiptoeing around your racist ass. You’re a dead man walking.”

In the moment, we weren’t sure whether to cheer Jackson or fear professional (or physical) blowback. But seeing Stanton blanche upon being read for filth…. Well, to paraphrase Jerry Maguire: Jackson, you had us at dumbass.

Stanton (an excellent Brandon Routh) tried to shrug off their heated exchange, but West made clear, “I meant what I said.” When Stanton asked for mercy, citing a wife and kids back home, West firmly countered, “Everybody you jacked up for no reason has a family. And it didn’t stop you.”

Jackson later was jumped and beaten by bona fide hoodlums when they responded to a volatile call and slimy Stanton looked the other way. But in the end, the bloodied rookie had enough presence of mind to switch on his TO’s body cam, and damn the bad cop’s future. In a final, incredibly moving scene at the hospital, between Makin and a never-better Richard T. Jones, Grey commended West’s resolve, saying though tears, “I am so damn proud of you.”

“It was worth it,” Jackson said, “to get the needle moving in the right direction.” 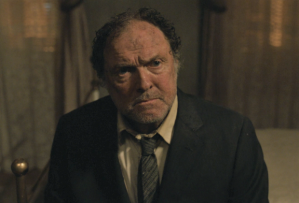 HONORABLE MENTION | We rarely have any clue as to what’s actually happening in Servant these days, but one thing we’re absolutely sure of: Boris McGiver delivered one hell of a performance in Season 2’s sixth episode. Returning to the fold as Leanne’s looney Uncle George, McGiver let it all loose as his character tore through the Turner household in search of his missing niece. The probable cult leader/religious fanatic jacked the tension up to 11, as he demanded answers, spat out bible verses and dropped cryptic hints that we and the Turners struggled to decipher. But it was McGiver’s off-kilter depiction of the furious man of faith that really got under our skin, with his erratic physicality and deranged delivery. Is George bordering insanity or is he privy to truths we can’t possibly fathom? Either way, the actor delivered ten-fold, bringing a chilling air to a series that’s already so unsettling. 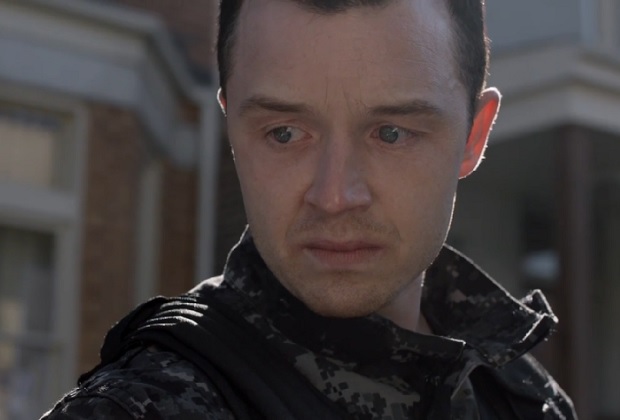 HONORABLE MENTION | As far as fathers go, Shameless‘ Mickey definitely does not have the best one in his homophobic dad — but their tumultuous relationship did give way to one of Noel Fisher‘s best scenes ever in Sunday’s episode. When his father Terry ended up wheelchair-bound and abandoned on the front lawn of his home, Mickey grabbed his gun and stomped over to take care of his old man once and for all. But as he pointed the weapon at Terry’s chest, Fisher’s expression started to shift from anger to something far more emotionally complex, his eyes filling with unshed tears. However, even years of abuse and pent-up feelings about what his father put him through couldn’t make Mickey pull the trigger. Mickey proved himself to be the better man, and Fisher proved that even after 11 seasons, he can still bring impressive new depths to his character. 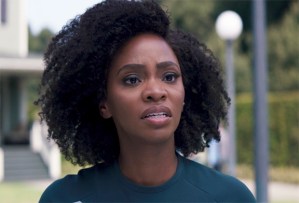 HONORABLE MENTION | Teyonah Parris gave quite a powerful performance during Friday’s WandaVision, and we’re not just referring to those glowing blue eyes. Parris also deftly handled the emotional material of Episode 7, bringing a heartache and urgency to Monica that we hadn’t yet seen. While passing back through the Westview energy barrier, Parris’ anguished movements and expressive face told us how painful it was, physically and emotionally, for Monica to forge ahead into The Hex. Later, during Monica’s confrontation with Wanda, Parris brought a noticeable confidence to her character, speaking with a newfound certainty that Wanda couldn’t hurt her; even more impressive was how quickly Parris then softened, making way for a grief-stricken Monica speaking in hushed tones about her late mother. And though Monica’s words weren’t enough to sway Wanda this time, Parris’ performance certainly moved us.