The following contains spoilers from the March 19 episode of ABC’s The Rookie.

On not one but two occasions, in the course of assessing the strengths and weaknesses of ABC’s light freshman procedural, The Rookie, TVLine noted that series regular Mercedes Mason is woefully underused as Captain Zoe Andersen.

Hmm, be careful what you wish for…?

In the freshman procedural’s 16h episode out of 20, an otherwise typically light and entertaining episode — in which the rookies aimed to ID and avoid “reversals” — took a dire turn when Nolan’s perceived and utterly accidentally embarrassment of a gang leader’s girlfriend wound up earning him a “greenlight.” Meaning, the entire Southern Front crime organization was out to ice said rookie.

Nolan had a protective detail when at home that first night, and upon bringing himself to the cop shop the next morning learned that he would not be riding with Bishop but the captain herself. Sergeant Grey meanwhile motivated the entire precinct to bear down, hard, on each and every one of the Southern Front’s illegal enterprises. After doing decent damage on that front, Grey leaned on gang leader Cole’s imprisoned pop to get the greenlight rescinded. The patriarch at first waved off the possibility, saying that any such decision needed to come from Cole himself. 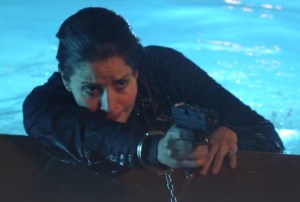 But a bit later, while Nolan and Andersen were out on patrol, they got word that the green light had been retracted. They then wrapped their day by responding to a random burglary call, but upon arriving at the location, got ambushed by Cole and two cohorts. Upon coming to, they were sat on chairs at the edge of a swimming pool, their hands cufffed behind them. As Cole gloated about gaining the upper hand, Andersen scoffed at his utter stupidity in targeting a police captain — and how the misstep just night get him whacked by Dad himself. Cole opted to cut his losses by pitching Andersen into the pool, where she and the chair quickly sank to the bottom. Nolan acted fast, offering to apologize on video to Cole’s girlfriend in trade for getting the captain fished out. But Cole insisted the video be done, perfectly, first. Andersen to her credit pulled an Oliver Queen and broke her thumb to wrest free from the cuffs. She then rose to the surface and yanked into the pool one of Cole’s henchman, while Nolan heaved his cuffed self at Cole, knocking him to the ground. Grabbing a gun, Andersen valiantly gunned down the second henchman, and got a few shots off at Cole, but wound up taking a bullet to her neck as he fled. Quickly bleeding out, she slumped back into the pool, and even though Nolan dove in right away to save her, the effort was futile.

Grey, full of fury, demanded that Cole’s dad give up his location, so the cops could bring him in (or possibly worse). Provided with that intel, the precinct set up a road block and entrapped Cole, who came out of his car hands in the air. Grey then tasked Nolan with making the arrest, knowing he needed at least this small bit of justice to begin assuaging the guilt he unjustly feels.

Describing the decision to make Andersen the series’ first casualty, showrunner Alexi Hawley shared on Twitter, “We went back and forth about it in the writers’ room. But it ultimately felt like the most dramatic and powerful way to impact our story.”

“There definitely will be [repercussions for] all of our characters,” he also said, “but especially Nolan…. It definitely has an impact on how he sees and does the job — if anything, he feels a greater responsibility to succeed to honor her memory, and the faith she placed in him.”

What did you think of the captain’s sad sendoff?