Look, it can’t all be “To partners!” and late-night courthouse canoodling.

So when Law & Order: SVU kicked off Season 23 with a two-hour premiere Thursday, it did so with a fast-moving acceleration of the sex trafficking case started in the finale — and by the end of the episodes, two squad members are gone! Read on for a recap of “And the Empire Strikes Back” and “Never Turn Your Back on Them.”

LOOK OUT, LIV! | The first hour picks up on the night of Fin and Phoebe’s non-wedding, where Rollins and Carisi are going at it… wait, are they at the courthouse? The hotness of their long-awaited macking nearly blinded me to it at first, but yes, Rollisi are sucking face in the halls of a municipal building at 10 pm on the Friday of a holiday weekend. “It’s not like anyone’s going to bust us,” she teases him when he gets skittish. Speaking of skittish: She asks him if what they have is real. “It seems like it is,” he whispers. “And tomorrow?” she wonders. (In case I have not sufficiently conveyed the hotness of this scene, please know: You could sear a steak on it.)

Meanwhile, Liv is driving home from the non-wedding, Stabler on speakerphone, which set this entire evening off on a warm-and-fuzzy note for me. Too bad some jerk behind her is blinding her with his brights. Stabler advises her to pull over and let the reckless driver pass, but as she tries, the car pushes her off the road and then speeds away. In the aftermath of the accident, an out-of-it Liv imagines that she sees Stabler in a fireman’s uniform, ushering her stretcher into an ambulance and telling her it’s going to be OK. “Elliot?” she whispers, but then her vision clears and it’s just a bald EMT with a goatee.

Turns out, Liv is OK, but she seriously hurt her foot. But she rushes back to the office, because Chief McGrath is gunning to take down Congressman Howard, the big fish connected to the ring of sleazebags who are making women living in public housing have sex with them. Both Catalina Machado and Howard’s right-hand man Ruben Ortiz are cooperating with the police, and through them, they realize that Howard is also into underage girls. So they work to set him up at an upcoming fundraiser, even though Garland is wary and wants to make sure everything is 100 percent certain before they shoot their shot — and McGrath, already not his biggest fan, doesn’t want to hear it.

Liv is called away from that meeting for an Internal Affairs Bureau interview about the night that Morales, Stabler’s fellow task force member, died. “It was a good shooting, textbook suicide by cop,” she says, noting that Richard Wheatley had faked the text from Stabler that lured Olivia to the hospital. Why Olivia, though, the interviewer asks? “It’s all part of [Wheatley’s] vendetta against Det. Stabler,” she says. “Any woman who’s close to him is a target.” In fact, she thinks Morales might’ve been there to kill Angela Wheatley and her. 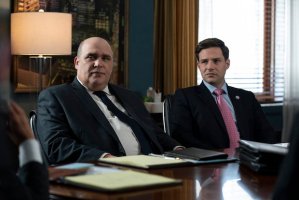 HOWARD’S GOING DOWN! | The fundraiser takes place, Howard roofies a 16-year-old intern at the afterparty, and the SVU squad swoops in to make their arrests. Later, while Liv is questioning the politician, he calls the arrest a political attack and not-so-covertly threatens her. Liv and Carisi later see Howard’s lawyer slapping him (!) after Howard demands that his legal counsel make all of his problems go away.

McGrath holds a press conference about the arrests — and Garland only learns about it when he turns on his TV and sees Liv and Carisi standing next to the big boss. He’s gutted, but when he swings by Liv’s office later, he pretends to go along with McGrath’s story that a communication breakdown was the only reason the deputy chief hadn’t been notified. (For what it’s worth, Liv did not know that Garland had been iced out. But she did know about — yet did not divulge to the rest of her squad — the presence of Joe Velasco, a secret undercover officer McGrath placed at the fundraiser.) Before he leaves, he thanks her for having his back. “Always,” she replies.

So Carisi and the SVU team get busy prepping the people who are going to testify at the grand jury in Howard’s case: Velasco, Machado, Ortiz, Jenna the intern, Paulie the super who was hooking Howard up with women, and Rosa, the mother living in subsidized housing whom we met in the Season 22 finale. It goes smoothly — so smoothly, in fact, that Carisi is feeling good enough about the cast to ask Rollins out for dinner the night before the court date. And that’s when things go to hell on a buttered bobsled. 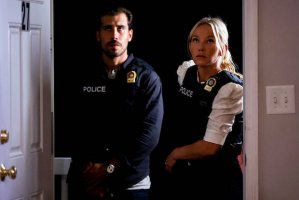 ON SECOND THOUGHT, MAYBE HOWARD’S NOT GOING DOWN! | In a montage, we see Paulie getting jumped by a group of dudes in a prison bathroom while a guard stands by outside, doing nothing. Rosa gets a threatening phone call, then notices men walking menacingly toward her building; she pulls her son out of bed and tells him they have to flee. Ortiz is found with his wrist slits in a bathtub. And Machado “jumped” from a building, landing on top of a car several stories below.

So that means nearly everyone who can take Congressman Howard down is either dead or missing. As Rollins and Liv stare at Catalina’s lifeless body, Liv says, “Find Rosa and find Jenna — now!”

As the premiere’s second hour starts, Kat convinces Rosa that she can keep her safe if she stays put (rather than running to Buffalo), and Rosa reluctantly agrees. Meanwhile, Jenna is missing from her family’s New Jersey home. In the attempt to find her, Kat takes a bullet that “snuck under” her bulletproof vest; Fin immediately applies pressure to the wound and calls a bus. On the way to the hospital, Kat’s heart stops (!) but the EMTs manage to revive her before they get to the hospital.

Rollins and Velasco eventually find Jenna trying to run away via the roof; Velasco realizes that she’s afraid of what her father, who he inferred is abusive, will do when he finds out about her involvement with Howard. “See this belt? My dad used to whip me with it,” he says, gaining her trust and telling her that he’ll help her figure it all out. Later, though, he tells Rollins that he embellished the story to achieve an objective. Which was the truth? Who knows? Back at the station, Jenna’s father refuses to let her cooperate with the case against Howard, maintaining that “nothing happened” between his daughter and the congressman. 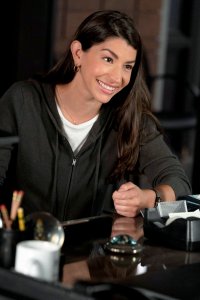 IS KAT OK? | Kat survives surgery. (Phew!) Afterward, she wonders aloud to Fin, “Am I where I’m supposed to be?” She muses about the futility of their jobs and the way they inadvertently re-traumatize victims, wondering if there’s a ways to be “more proactive” about making a difference. Fin calls Liv and Rollins and warns them that Kat may not want to come back to work, ever; he’s interrupted by Velasco, who’s managed to get Jenna’s mom to give him some crucial intel. As it turns out, Howard got Jenna pregnant when she was 15 — and Jenna’s mother also has one of Jenna’s dresses that incriminates him. (Side note: Ewwww.)

Terrible story short: Howard had sex with Jenna on her 15th birthday, then she became pregnant. After she found out that she was carrying his kid, his lawyer arranged for Jenna to have an abortion that Howard didn’t know about. And when Howard finds this out — while Carisi and Liv are watching, no less — he suddenly announces that his lawyer is responsible for all the dirty work, including the hits on his witnesses. The lawyer, by the way, quits and winds up offering the District Attorney’s dirt on tons of famous faces.

The way it shakes out: Howard is arrested. None of the higher-ups — like, higher than McGrath and Carisi — want to go after Gold. So the powerful pervs about whom Gold hinted can rest easy. And then Kat comes to visit Liv to tell her that she doesn’t want to be part of the police department’s broken system anymore. “We’re not in the same place. I don’t have 20 years invested. I’ve got to get out before I get in too deep,” Kat says. “I just can’t stay.” Then she thanks Liv for everything, Liv says they’ll miss her, and that’s a wrap on Det. Kat Tamin. (Psst: Read this.) 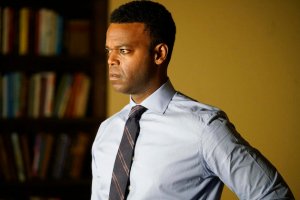 On a related note: Chief Garland puts in his papers to leave, telling Liv that he’s going to go before the department can bloody him up any more. (Psst: Read this.) McGrath nearly does a tapdance in his joy over Garland’s departure, informing Benson that he thinks SVU should focus on the “real rapes” (rather than acquaintance rape, etc., which he deems beneath the department) and that, until they fill the deputy chief position, she’s going to report directly to him. Oh joy.

Anyway, how about we end this on a semi-high note? Rollisi talk about whether or not to disclose their newfound thing. “I thought you said we didn’t need to disclose unless this was a serious relationship,” she says. “I’m taking this seriously,” he says. “So am I,” she concurs — but she doesn’t want to tell anyone else, not yet. Raise your hand if you feel like this might blow up in their sweet, smitten faces!