Law & Order: SVU‘s Season 22 finale featured Benson, Stabler and a wedding. And while the proceedings might not have played out like fervent EO ‘shippers may have wanted, it certainly threw a big bouquet toward the ‘Rollisi’ admirers out there.

The announcement of Fin and Phoebe’s nuptials — which were set for the Friday of Memorial Day weekend — kicked off the hour. Pretty soon, Carisi was signed up as officiant, and Olivia & Co. eagerly awaited their co-worker’s big day.

Before that, though, the squad investigated a woman who was suspected of being a sex worker but who was actually being sex trafficked in exchange for being able to live in a subsidized apartment with her young son. As it turns out, she was one of several women wrapped up in a scam run by a respected social justice crusader.

And elsewhere, Deputy Chief Garland was in extreme hot water with his superiors for what he said in a deposition for the Jayvon Brown case. After he went on the record apologizing for systemic racism in the New York Police Department, Garland was chewed out by Chief McGrath and shunned by his fellow officers (but not, of course, Liv & Co.). He was then called before his bosses, who chewed him out for what they perceived as his “failure,” and it clearly got to him. Eventually he got confirmation that the old guard was going to try to squeeze him out. “I’m not going to go quietly,” he vowed.

OK, back to the wedding. Despite wanting to keep things small, Fin and Phoebe’s event kept growing bigger, which led to bickering between the bride- and groom-to-be. Similarly, Carisi got into an argument with his girlfriend, Nicole, when he mentioned that he always thought he’d be married and have children by his age, and she countered that weddings “are a patriarchal institution designed to transfer ownership of a woman from the father to the husband.” Eventually, she decided she wouldn’t attend as his date. 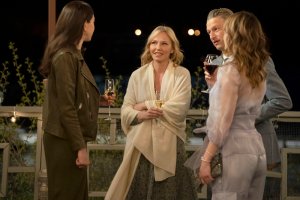 But as it turned out, Phoebe and Fin stood up in front of their friends and family to say, “We’re not getting married today.” Phoebe quickly clarified that they weren’t breaking up — they just didn’t want to ruin a good thing. So the group partied. Stabler showed up late and was only mildly surprised that he hadn’t missed much. At Rollins’ insistence, Carisi read the ceremony he’d prepared — and she cried. He teased her, wiping her tears away with his handkerchief and then lovingly caressing her cheek before scoffing that it was hokey. THEN SHE KISSED HIM AND IT WAS AMAZING.

And then, to cap off a lovely evening, Stabler asked Liv how Fin and Phoebe met, and she said they were partners. THAT LOOK THEY GAVE EACH OTHER AFTER?? I’m dead. “To partners,” she said, and they both raised their wineglasses. (Thirsty for more? Check out our recap of what happened when Benson showed up on the Law & Order: Organized Crime season finale that aired afterward.)

Now it’s your turn. Grade both SVU‘s finale and Season 22 on the whole via the polls below, then get to the Comments to let loose!