Richard Wheatley, I know you’ll understand me when I say: Girl, you are a HOT MESS.

Your son wants you dead. You nearly died in the Law & Order: Organized Crime finale. You’re a guest of the Metropolitan Correctional Center. And even though you have the upper hand at the end of the show’s Season 1 finale… it’s a tenuous grip, at best.

But I’m getting ahead of myself. The hour opens with the Wheatleys getting arraigned, while the Stablers watched. As Richard’s charges — which included the murder of Kathy Stabler — were read, Richie was shocked to hear that his dad had killed his grandfather. That led the young man to put out a hit on his father… which we’ll deal with in a moment.

Holed up in the hotel under police watch, Angela Wheatley had her lawyer do some digging to find out that the woman Richard was talking about at the end of the previous episode was Capt. Olivia Benson. But she didn’t have much time to digest that information: When she went into the bathroom to take a shower, she soon collapsed. Freddie and her lawyer busted the door down to find her foaming at the mouth, eyeballs rolled back in her head.

She lived, but was in rough shape. And when it was determined she was poisoned, but not via something she ate, the team realized that the shampoo and soap Freddie had ordered for her via a drugstore app had been intercepted along the way. (Side note: I thought Freddie was a mole, but it turns out he’s just real dumb?) 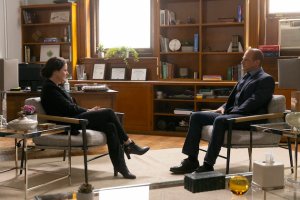 We got a small glimpse at the state of Stabler’s mental health, and it was positive! He’s talking with a post-traumatic stress disorder therapist. “We’re working on coping strategies,” he told Bell after she came over when he called. (Side note 1: I love their relationship. Side note 2: I love Stabler’s man-capris.) Later, during a session with the counselor, she commented that Elliot has mentioned bad decisions that he’s made, and she wondered whether he worried that those lapses in judgment would negatively affect justice’s being served.) 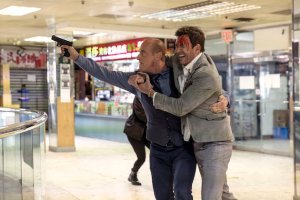 Meanwhile, the Feds — headed up by a prosecutor named Vince Baldi (played by The Good Wife‘s Josh Charles) — got real interested in Wheatley. And when they moved him from the facility where he was being held, Richie’s hitmen did their thing. Stabler shot the goon who was about to kill Wheatley (though Wheatley did take a shot to the leg) and, with Bell, saved him from certain death.

But the U.S. Attorney’s office still wanted Wheatley delivered to them. The New York Police Department got wind of it and showed up — Olivia included! — in a gesture of solidarity when Wheatley was walked back into custody. As Bell thanked her, calling her “Liv,” Wheatley heard, deduced that the woman before him was Stabler’s former partner and grinned knowingly. THIS IS LIKELY NOT GOOD. (And if you want to find out what happened in the SVU episode that preceded OC‘s finale, check out our recap.)

Wheatley gladly sang about all of his criminal contacts in exchange for leniency, and it went well for him. But Stabler had a request of Baldi: “Do not use the murder of a police officer’s wife in your deal.” So Wheatley was sent to the MCC, where he’d await trial for Kathy’s murder.

In his cell there, Richard found a contraband phone under his mattress. He called his wife and instructed her to go into his wine lair, open his launchpad and take dictation: “O. I’m in trouble. Can you please come meet me.”

It’s how Wheatley lured Olivia to the hospital where Angela was being treated, and that’s where they all realized that Morales was the mole. Wheatley paid him $2 million, and he was about to shoot Ayana — after injecting Angela with something probably lethal — when Bell shot him twice in the chest, killing him. (Apologies for missing the shooter the first time around.)

Stabler, Bell and Benson found Angela in a nearby room, gasping and fading in and out. Stabler stepped into the empty hallway and yelled, “I need help!”

Now it’s your turn. Grade both Organized Crime’s finale and Season 1 on the whole via the polls below, then get to the Comments to let loose!