In Episode 3 of The Chi‘s just-wrapped Season 4, a character named Nuck informed a character named Shaad that Imani, the girlfriend of their mutual acquaintance Trig, was transgender. Events leading up to this revelation had already given Shaad cause not to like Imani; she’d been vocal about not wanting Shaad, who’d recently been released from prison, to crash with her and Trig while he got back on his feet. But upon hearing that Imani wasn’t the person he thought she was, Shaad’s face took on a very disturbing look.

That look, and the sentiment behind it, simmered as the Showtime series continued its season. It seemed as though a violent storm was brewing, heading in Imani’s direction. After all, the series, created by Lena Waithe, is known for depicting both the joyful and the sometimes brutal reality of living on Chicago’s South Side. And given that transgender people in America are far more likely to be the victim of a violent crime than cisgender people are, it certainly looked like Imani was in danger.

But then The Chi bucked convention. In a surprising, uplifting twist, Season 4 ended with Shaad defending Imani against a man who made vulgar comments about her in the street, slamming him up against a wall and telling the man to shut his mouth, because Imani was “family.” (Read the episode post mortem here.)

“That’s what we’ve been building to the whole season, to that beautiful moment where he’s protecting her and he understands,” showrunner Justin Hillian says, adding that Waithe wanted to “take someone who represented this large segment of our [Black] community and educate them.” 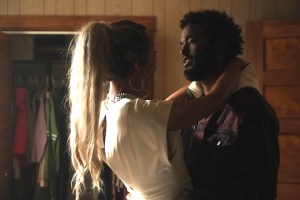 Jasmine Davis, the transgender actress who plays Imani, tells TVLine that when she became privy to an outline of the storyline early in the season, she was encouraged by Shaad’s evolution. “I want a Black man to be shown in a different light, that they’re not all homophobic or transphobic,” she says. “Sometimes the world only shows that part. They never show the part where so many heterosexual Black men who are so comfortable with girls like me and have us as friends or aunties or cousins and family members.”

And once Davis ascertained that Imani wasn’t going to go to that great hair salon in the sky (“Sometimes I’m on edge, because it’s The Chi,” she says, laughing as she references the show’s body count), she recalls that she “got a little emotional and wanted to cry, because Jason Weaver,” who plays Shaad, “is such a cool dude.”

Weaver (Let’s Stay Together), who is new to The Chi this season, says he steeled himself before checking in with social media in regard to his character’s strongly held beliefs. “I hate to say it, but I was expecting to see a lot of ignorant comments and the backing up of that ignorant mindset, if you will,” he recalls. “But to my pleasant surprise, especially Black women in particular, they were really on Imani’s side.” And the guys, he adds, were vocal about the story, too. “There were even young Black men who… maybe echoed [Shaad’s] sentiments at times,” he says. “But over the course of time… I’ve had young brothers tell me like, ‘Hey, man, I like how y’all brought that back around.'”

And Davis, who has spoken in the past about the highly mixed responses she’s received online, says things shifted a bit in Season 4: “Actually, the love overshadows the hate by a hundred times. So even if there was hate this season? I didn’t notice it.”

Ultimately, Hillian says, the important thing is that Shaad didn’t come to his big realization all by himself; he’s there only via Imani’s continued ability to show him grace. And his loyalty to Trig — who loves Imani — also plays a huge part. “So it’s like, ‘OK. If this is my boy, who I go back with, who I trust with my life, and this is the person he trusts with his life? Maybe I am tripping,'” the EP says. “‘Maybe there is a lot of good here.'”

Weaver adds: “That’s the overall message, especially at the end, that we were trying to convey to the audience, and I think it stuck. I think they got it.”