Warning: This post contains spoilers from The Chi‘s Season 4 finale.

What a difference a year makes.

In 2020, Showtime’s The Chi ended Season 3 with a happy gathering at Emmett’s new BBQ restaurant, a feel-good gathering… that ended abruptly with the murder of unlikely hero Ronnie. This year, the Season 4 finale , which aired Sunday, wrapped with a bustling Community Protection block party that ended without incident — phew!

“We definitely wanted to fulfill the promise to the question that we asked at the beginning of the season: Can the community take care of itself? And we thought it was important for that answer to be ‘Yes,'” showrunner Justin Hillian tells TVLine. “And of course, it’s not perfect. But seeing people have that joy? Yeah, it was definitely the plan.”

But one character certainly was not feeling joyful by the hour’s end: Mayor Otis “Douda” Perry, who left town after Trig threatened to go to the press with security-camera footage of the mayor’s brutal beat-down of his adviser, Marcus. But is Douda done? We asked HIllian for the scoop.

TVLINE | Let’s go to the big — I was going to say “elephant,” but Douda is more like the big bull in the room. And now he’s no longer in Chicago. Can you say whether or not he’s completely gone? Is Curtiss Cook still with the show?
What I would definitely say is: Never underestimate Otis Perry. [Laughs]

TVLINE | He’s barely recognizable in that last scene, when he’s slinking away in the baseball cap. Even his body language is different.
Yeah, and you know, we really considered that a lot. If you think about the first episode of the season, when he comes into Imani’s basement, he’s fully in control. He’s in charge, and he’s dressed up, and he’s letting everyone know that he is running everything. And then you see him at the end, where he overplayed his hand. It didn’t work out. But I would have a hard time believing that he would give up quite so easily.

TVLINE | Is there a clue in that last scene as to where he’s heading? Or are you keeping that vague on purpose?
Definitely vague on purpose, because we are excited about the future. 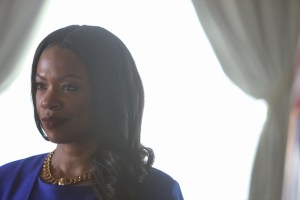 TVLINE | Are we to infer that Roselyn is mayor of Chicago now, like she was when he was in the hospital?
No. [Laughs] She would love that. Her in that chair, she’s just thinking, “It should’ve been me and I would’ve done it right, and had he listened to me, he’d still be in this chair.” Because it should have been her. [Laughs] He never would’ve gotten mayor without her.

TVLINE | Mayor Perry’s major push this season was to defund the police, in part, and redirect those funds toward Community Protection. What does that look like in a potential Season 5?
We definitely want to continue to show what the possibilities could be for the neighborhood and for people looking after one another. Lena [Waithe, executive producer] has very little interest in dealing with the police at all. So ideally, we’d be able to completely remove them and have the community deal with its own issues, because the show has always been about the community. So to keep it like that, we think makes everything a little more fertile and a little more interesting.

What did you think of The Chi‘s Season 4 finale? Grade it and the season on the whole via the polls below, then hit the comments with your thoughts!