If this week’s The Chi had an MVP, I’d throw all of my support behind Tiff.

Set aside, for a moment, the fact that she has some of the best lines in the episode. I’m just super impressed with how she refuses to rage at Emmett for his confessed infidelity — and how that decision, in turn, drives him far madder than any raised voices or hurled epithets ever could. And as a bonus, she doesn’t let her husband’s messiness interfere with her burgeoning edibles business… even though Tiff’s business partner is her hub’s former boinking partner.

Speaking of sexy times… what about that final scene with Mayor and Mrs. Perry and a friend? Read on for the highlights of “Native Son,” broken down by characters. 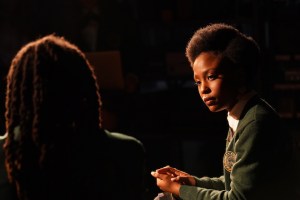 KEVIN, JAKE AND JEMMA | Kevin and Jake spend part of the episode in in-school suspension, being patronized by a white teacher who informs them that he’s “one of the good ones.” He offers them an out: If they write about their feelings about the police attack they suffered, they can leave. Jake declines. Kevin gets to writing. Later, Jemma asks Kev to come on her school talk show to discuss what went down with the cops, but he doesn’t want to. Jake, however, agrees. And the day of the interview, he wears cologne, and Jemma notices. Hmm…

EMMETT, TIFFANY AND DOM | Tiff returns home the morning after sleeping with Dante, and Emmett demands to know where she was. She hides nothing, telling him that she was with her customer, and when Emmett angrily asks if they slept together, she flatly replies that they did — and that Dante is far more skilled in certain areas than Emmett is. (Ha!) At work, Emmett lets Dom know that he told Tiff about them, and she’s irked: She really likes Tiff and hoped they could be friends in addition to starting the edible business together. But that still may be possible. At an event to kick off the edible side hustle, Tiff makes it clear that she’s not mad at Dom… but that she also doesn’t want Emmett to sleep with the chef again. And after chatting with some clients who have an open relationship, Tiffany announces to Emmett that she wants one, too. He’s not into the idea, but he goes along with it.

TRIG AND IMANI | Nuck brings one of his girls to Imani’s salon to get her hair done, and the young woman is so traumatized, Imani decides she needs to intervene. So she asks Trig to get involved, but Trig says he doesn’t want to: The woman is there of her own free will, he reasons, though Imani quickly corrects him that she definitely is not. She points out that Trig, along with Tracy, is already working in a citizen’s group designed to serve the community and step in so Black residents don’t have to call the police. (We see the first call — a domestic violence situation — in action: Trig gets punched, but on the whole, it doesn’t go too badly. I worry, though, about well-meaning but untrained volunteers stepping into potentially really volatile situations, but we’ll see how it plays out in the weeks ahead.) “So sex workers aren’t worthy of your help?” Imani asks, angrily, making Trig sleep on the couch that night. But they may have bigger problems brewing: Shaad learns, from Nuck, that Imani is transgender, and it seems to freak him out. 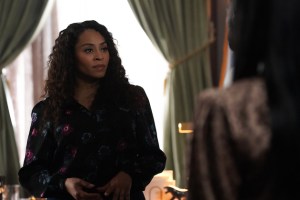 DOUDA, ROSELYN AND TRACY | Douda wants to take $5 million from the police budget and give it to Tracy to spend on community initiatives. Roselyn and Marcus think this is a terrible idea. But after Tracy sides with the mayor, saying that average folk in the city don’t care about getting the Olympics to come to town, she’s his absolute favorite person. And when she asks him if he wants company at his place… you can guess what happens next. What you might not guess is that Roselyn walks in on the two getting friendly (and undressed) in the living room, then tells them to keep going. “Don’t stop now,” she says, taking a seat on the sofa, “I like to watch.” Douda initially scoffs, but when Tracy grabs his arm and pulls him back to her, he’s down to clown while the First Lady of Chicago drinks it all in from the other side of the room.