Perps on the run may have a bit of a head start in Law & Order: SVU‘s upcoming season.

Mariska Hargitay‘s recent ankle injury will “be addressed in the season premiere,” a rep for the procedural tells TVLine exclusively, which leads us to believe that Capt. Olivia Benson might have to sit out the serving of a search warrant or two.

As Hargitay showed followers of her social media accounts in July, she broke her ankle at the start of that month and needed surgery to address the damage. The incident led pal/former Mike & Molly star Melissa McCarthy to offer a very public show of support, which Hargitay also shared via Instagram, saying, “Might be worth breaking my ankle for.”

Photos of Hargitay on set as the show began shooting Season 23 showed Hargitay using crutches during her recovery. Per the show rep, however, the crutches won’t show up on screen. 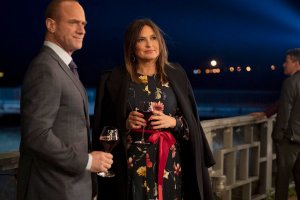 On a related note (and because we’ve spent far too long looking at Hargitay’s Instagram feed today): Does this dress look familiar to anyone? Perhaps like the one pictured at right? The fact that the actress is wearing it in a scene for the upcoming season implies that Season 23 either will pick up right after the events of Fin and Phoebe’s non-wedding in the Season 22 finale, or will feature a flashback to that (‘ship-tastic) episode.

SVU returns with a two-hour premiere on Thursday, Sept. 23, at 8/7c, followed by Law & Order: Organized Crime‘s Season 2 premiere at 10 pm. (Go here for all of NBC’s Fall premiere dates.)

Are you looking forward to the new season of SVU? Sound off in the comments!