Warning: This post contains major spoilers from Sunday’s Evil, so if you haven’t seen it yet, begone, devils!

White people get away with murder — both metaphorical and literal — all the time. And now, Evil‘s Kristen Bouchard can count herself among their number.

Sunday’s episode of the supernatural drama found Kristen’s detective buddy, Mira, honing in on the fact that Kristen had a shaky alibi on the night of Orson LeRoux’s murder. And one evening after Kristen had a vision of a bloody Orson taunting her about the intoxicating nature of taking a life, she wound up in her backyard, holding the murder weapon, just as Mira and her partner Anya showed up.

Overcome, Kristen admitted that she’d killed the serial killer. But Mira surprised her by hushing her and stating that she wasn’t going to be arrested for the crime, because Kristen was a “good suburban mom” and LeRoux was a “piece of s–t,” and “Some people deserve to die. Cops know that better than anyone.” As Kristen sobbed, Mira added that she and Anya would “say we saw a Black man back here, we came out and scared him off.” (Read a full recap.)

That was a sharp reminder of how differently the police view white women like Kristen and men of color like David and Ben. In fact, earlier in the episode, Kristen had railed against the injustice… only to benefit from it in the hour’s final moments.

We talked with series star Katja Herbers about how the development might affect Kristen after the Paramount+ drama returns from hiatus on Sunday, Aug. 29. 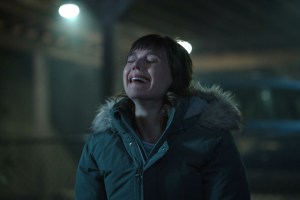 TVLINE | Do you think Kristen thought she’d eventually get caught?
I do. I think it was a huge worry. And although she didn’t voice it, she was seeing all these things that she thinks were manifestations of her anxiety and guilt. So yeah, it was a huge relief to get acquitted, obviously, because she doesn’t want to go to prison and not be a mom to her children. But then a couple beats after that, there’s also the realization of, “Wait a second. I might not be going to jail, but I’m kind of forever shackled by this. Also, the way that I got acquitted is basically you know, because of my white privilege.” … Nobody else is going to jail instead of [Kristen], so that’s not something [she has] to grapple with. And I do think she thinks she did the right thing in killing him. But I think the fact that she got acquitted so easily, because she’s white, and she had a friend [in the police department], and she doesn’t look like the type who would ever kill anyone, and she drives a Subaru… [Laughs] It’s like, “That’s not how the world works for a lot of people, and it’s working for me.” 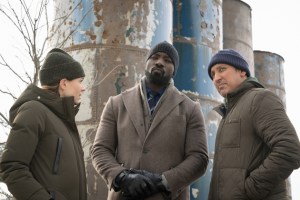 TVLINE | It’s striking to see her be so solidly allied with David and Ben throughout the episode, then the moment that white privilege can help her, she allows it to. Yes, she’s shellshocked, but she doesn’t stop Mira from letting her go. Do you think it surprised her that she’d so easily accept that unequal treatment?
Yeah. And I think when she said, “Mira, I’m guilty,” she, in that moment, she thought: “This is it. They’re going to now take me to jail. and that’s it. That was my life with my girls. I’m going to be locked away forever.” And then Mira says, “Stop talking,” and I still try to talk when she says, “You need to shush. You’re a white mom of four children, you’re going to be good, we’re going to beat this, and this guy deserved to die.” [Kristen] didn’t kill just anyone. [She] killed a serial killer. So, there’s something to say for that. But also, because we see this storyline of the white cop shooting the Black woman and getting away with that without too much trouble, now [Kristen] getting away with that? It’s an awful thing.

TVLINE | I can’t imagine that Kristen will suddenly be worry-free and no longer tormented by the things she’s been seeing. Can you speak to how the events of this episode will affect what comes next?
There’s going to some immediate relief because still, this is a better outcome. However unjust, in a way, it’s definitely the better outcome. So, I think she’s a little high off that for an episode. And then everything’s right back. Things are not going to go away, and then [Andy] is going to come back, and yeah, I think this guilt about the way that [Kristen has] been acquitted is going to get bigger and bigger. She’s going to unravel more and more. [Laughs] I mean, we’ve seen an unraveling, somebody who’s very lost, and that’s going to increase. 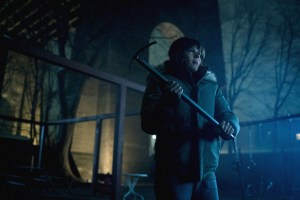 TVLINE | I do love that she’s unraveling in the way a multitasking mom would. Like, the girls are still getting fed, going to school, Kristen is still going to work.
[Laughs] Yeah. I love that about her, too. She’s so multifaceted… She has, like, a split personality or something. I read this book about — because I’ve been reading a bunch of psychology books to pretend to be smart and understand what I’m talking about when I say all these psychology things — and one of them talks about how a trauma can actually manifest a split between your right and your left brain. So you’re not schizophrenic, but you do kind of become two people. You have two personas. And I think Kristen might have more than two. [Laughs]  I’m not sure where she’s at.

TVLINE | When Evil returns from its break, we’ll get the silent episode that Robert and Michelle King were teasing earlier this season. Talk to me about your experience shooting that — you hadn’t done something similar in your career before, correct?
No. It was such a blast. Robert King directed it, which is just my favorite when he comes to direct. And yeah, my character gets drunk quite quickly in the episode. [Laughs] I loved playing that. You know, it’s a little harder to adhere to the rules of silence when you’re drunk. So, we had a lot of fun shooting that. I haven’t seen it yet, but I imagine it’s going to be quite special.