Evil‘s Kristen Bouchard has had a hell of a week.

Not only does she spend much of the CBS drama’s finale worried that a freed serial killer is targeting her family, she learns that the fertility clinic she and Andy used when conceiving their daughter, Lexis, is part of the unholy syndicate that’s been messing with humanity all season long. And after she perhaps commits murder — RIP, Orson LeRoux — we get a most disturbing visual: When Kristen holds a cross in her palm in the very last scene of Season 1, the crucifix burns her hand.

Add to this that David is having visions about that goat demon thing coming for Kristen with a scythe? And that Lexis seems really susceptible to an other- and underworldly influence? We decided to go to a Higher Authority — aka the series’ co-creators and showrunners Robert and Michelle King — for some answers.

TVLINE | Let’s start at the very end: We see Kristen get burned by the rosary in the last scene. David very clearly points out earlier in the episode that’s a good indicator of demonic possession. How worried should we be for Kristen as we head into Season 2?
ROBERT KING | The reason to be worried is that it happened. The reason not to be worried is the look in the mirror, a look of, “Oh f–k.” Evil people who indulge in evil, where you can’t pull back, maybe would wear that as a badge of honor or they would look at it and go, “Yeah, that makes sense.” Kristen doesn’t want to be that person.

TVLINE | However, there is the question of whether she killed a guy in this episode.
ROBERT KING | Yes. [Laughs]
MICHELLE KING | There is a little question.

TVLINE | Kristen has been the audience’s entrée into this world of exorcisms and beliefs. Talk to me about taking the, for lack of a better term, most rational character in the show on a journey that leaves her possibly possessed by the finale.
MICHELLE KING | You are exactly right that she has been on a journey. She starts out very rational. And these are issues that she just never thought that much about. So throughout the season, we see her exploring ideas that have never been comfortable to her. And then the question at the end becomes whether indulging in those thoughts, as well as meeting people that are evil, pushed her over some kind of line.
ROBERT KING | The other aspect is her children. The children in this season have not been just window dressing. The show takes the idea of innocence seriously, not as something to satirize or make fun of. The kids can be irritating, but they’re also innocent and would welcome being protected. Kristen’s act, whatever it is in that last episode, is basically to lead the way to co-opt someone into evil through their protective instincts. The usual motherly instinct is turned on its head. 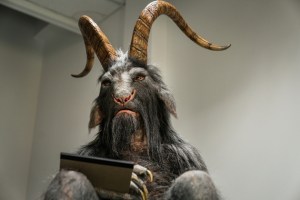 TVLINE | What is the name of the giant goat demon?
ROBERT KING | You want the character name, right? Like what do you call him? Demon Therapist. Because we haven’t given him a name yet… We really wanted some sense that it didn’t matter if you killed George. There’s someone beyond George there. You can’t get to the bottom of evil, even if you kill what you find as its most present representation.

TVLINE | We see Demon Therapist a lot in this episode in dreams and such, but in the tag of the previous episode, he was chillin’ in a room with Leland. So how corporeal, how real is he?
MICHELLE KING | [Laughs] Well that, of course, is the question. Is he real or does Leland just see his therapist in the demon?
ROBERT KING | I would kind of love it if it went both ways, because it’s funny. The fact that there’s something Lynchian about it all. Yeah, the bonkers things are really happening. But also, if you want to go in and say Kristen’s point of view matters, too, and if she walked in that room would she see that beast there? Maybe not. But then he’s been in her dreams, too. So anyway, all of those mind teasers are intentional to a) make a fun experience and b) make an experience you’d want to return to.

TVLINE | David has a pure, non-drug-induced vision toward the end of the episode. Will he ruminate on this for a while? Is this something he might want to share with his partners quickly?
ROBERT KING | I’d think his first instinct is to share it with Ben, because both of them are concerned [for] Kristen. His visions, he’s always worried whether they’re from God or from someone else who is trying to defeat him. So the question would be: Can he trust this? The audience knows, and has seen enough, to say, “David, please trust it.” But the difficulty of the supernatural over science is it’s not as concrete. You can’t go, “OK, because of A, I should act in behavior B.” It’s always a bit of a mystery, the best way to act, based on a vision.

TVLINE | You’ve said that the finale is a change in the paradigm. How doe the plan you have for next season play out compared to what we saw this season?
ROBERT KING | Well, evil isn’t just out there: It might be in Kristen and in her family. We’ve seen the attack coming from three different directions. What will feel like a paradigm shift, like the end of one of Charles Dickens’ books moving into another book, is this sense of it’s not just about applying your skills to something outside of you. Now, can you apply your skills to yourself?
MICHELLE KING | And that’s very exciting to us because we love these characters, so the thought that we can explore them even more fully in the second season is very appealing.

TVLINE | Leland and Sheryl get engaged in this episode: Are they going to be registering for china and all that?
ROBERT KING | [Laughs] I hadn’t thought of that, but that is hilarious. Nordstrom’s for China is a great idea.

What did you think of the finale? And has anyone done the math on those episode titles? (Tonight’s ep was called “Book 27.”) Talk about it in the comments — and don’t forget to show your work!