This ending of this week’s Evil made me scream.

Not because I’d just witnessed a horrifying rehash of the Rwandan genocide, or a ghastly murder, or the near-miraculous healing of Kristen and Andy’s youngest daughter — though all those events transpired, too. The moment that had me hollering in disbelief, in entertainment, in sheer They didn’t just actually do that, did they? came at the very end of the CBS drama’s hour, which showed nefarious forensic psychologist Leland Townsend meeting with his own therapist.

The scene began with Leland ranting about how Kristen made him feel “impotent” (though not sexually) and how she’d caused him to feel small and unimportant by digging into his past. “I should have ripped out her heart,” he whined, the camera hovering just above the therapist’s shoulder as the other man questioned why Leland hadn’t done exactly that.

“It’s not part of the plan. Or has that changed?” Leland replied sulkily. And that’s when the shot finally changed to show us that LELAND’S SHRINK WAS A DEMON. A full-on, goatlike, big-horned, shaggy-furred, cloven-foot, unmistakably Satanic fiend from Hell.

(He was taking notes on a legal pad. That seems like an important detail to include.) 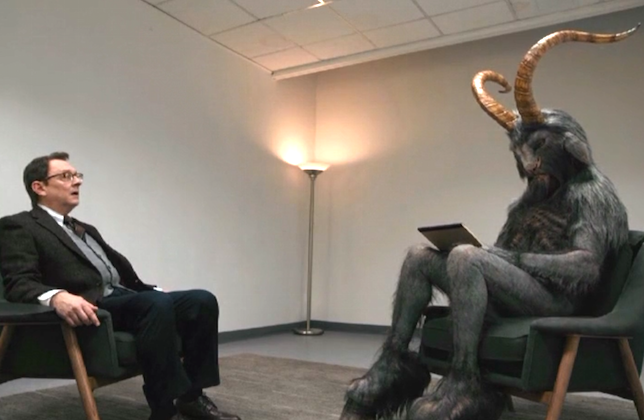 “This show is from the creators of The Good Wife?!” you say? “From the creators of The Good Wife AND BrainDead,” I reply. You remember BrainDead, Robert and Michelle King’s one-season political drama in which alien bugs — like, actual insects — infiltrated the minds of several members of Congress? If that show was the Kings letting their freak flag fly, Evil is them waving it like Enjolras at the barricade.

The best part about all of this is that, for most of its inaugural season, the show has erred on the side of showing less in order to creep-out more. Just minutes before the demonic reveal, in another storyline, a woman David had been counseling about her evil urges paused to listen to a sound coming through a crack in her basement wall. Was it the barely-there whisper of the Antichrist, egging her on to commit vengeful murder? Or was it merely a draft blowing over a gap in the stones? Viewers never got an answer and were left to draw their own conclusions as the woman calmly shot a man through the head, killing him.

On a show like Buffy the Vampire Slayer or Grimm or Charmed, the revelation of Leland’s infernal analyst would’ve been just a footnote in the episode, yet another CGI’d beastie in a long line of Monsters of the Week. But this is different. This is a very definite choice. And I am HERE FOR IT.

Because if Evil isn’t afraid to toss one of Satan’s actual minions into the mix every now and then, who knows how far the show will go? This week’s episode proves that Evil isn’t afraid to get super weird, and we’ve got the Jan. 30 season finale — and a whole ‘nother season beyond that! — to watch that willingness bear twisted, delicious fruit.

What did you think of Evil‘s final scene? Weigh in via the poll below, then hit the comments!