This post contains spoilers for Evil‘s Season 2 premiere. The power of Christ compels you… not to read any further unless you’ve seen the episode.

Have Satan and his minions corrupted Kristen Bouchard and pressed her into service as a foot soldier in their infernal army? By the end of Evil‘s Season 2 premiere, it’s still unclear. But one thing we do know: Kristen definitely killed Orson Leroux.

It’s been a while since last we hung out with David, Kristen and Ben — the Season 1 finale aired in January 2020 — but it feels like no time has passed as we jump right back into the evening that serial killer Leroux was offed. And then Ben is visited by a succubus of sorts and Leland wants an exorcism and “Feliz Navidad” is deployed in a seriously unsettling way and… well, let’s just get into the events of “N Is For Night Terror,” shall we?

WON’T YOU TAKE ME TO FUNKYTOWN? | The hour opens with the last few moments from the Season 1 finale: Kristen getting the call that Leroux has been bludgeoned to death, presumably by his wife. Then Dr. Bouchard pulls a rosary out of a drawer in her bathroom vanity and is shocked when it burns her hand. But (essentially) single moms have no time for existential crises! So she puts some salve on the wound and heads outside, where she removes a bloody axe from her trunk and starts to dig a hole in the backyard. One of her daughters is watching her from a second-floor window (I’d put money on it being Lexis, especially based on what happens later in the ep), but when Kristen goes upstairs to check on the girls, they’re all asleep.

Downstairs, she thoroughly washes the ice axe in the kitchen sink, then hangs it in the closet underneath an umbrella. She thinks about calling Andy, but dials David instead. But he’s out for a late-night run without his phone. “Please God, help me,” he cries, panting, and as someone who loves running but frequently thinks she might die while doing so, I can relate. “Help me see,” he continues, and oh, yeah, he’s talking about his vision.

The gash in his side is bleeding through his bandages when he gets home. He soaks a pad in alcohol? peroxide? And presses it to the cut, which causes him so much pain that he yells and then collapses onto the floor. He returns to the vision of Kristen, the hoofed beast and the scythe in the field… only this time, Leland is there, dancing to Lipps Inc.’s “Funkytown.” (Side note: Bwahahahaha and WHAT IS THIS SHOW, EVEN?) 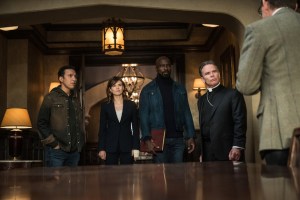 GUESS WHO’S BACK? | The next day, David, Ben and Kristen brief Bishop Marx on their suspicions about RSM Fertility: “A demonic presence is trying to corrupt a generation through manipulating their eggs,” David reports. An incredulous Marx is like, “Cool, cool. Anyway, I have a new assessment for you.” He describes a new parishioner who’s given a lot of money to the church and is seeking an exorcism because he orchestrated his own diabolical subjugation, aka “in his youth, he allowed himself to become possessed.”

As you might have guessed from the promos and this, that parishioner is Leland Townshend. And when he shows up, our holy trinity is apoplectic. “We can’t believe a word that comes out of that f–ker’s mouth,” Kristen says, reveling in the CBS-to-Paramount+ show’s newfound ability to curse. David is similarly, if less colorfully, against working with the man who’s been undermining them all along. But Ben offers a different perspective: Leland’s move is obviously some kind of con, “so let’s con him back” by agreeing to assess him. His reasoning? Even his lies will reveal some truths that they might be able to use.

During all of this, Ben is looking at Kristen very warily. “Is there anything I should be worried about there?” he asks, blatantly pointing out that she had blood on her leg the day that Leroux was killed. She squirrelly avoids his question, instead asking him to check out the metal in the rosary she touched, which left her with a “skin rash,” she says.

An initial conversation with Leland goes something like this. He says he wants an exorcism because he’s in love with Sheryl and “my darker nature has enjoyed a pretty free reign.” He recalls conjuring the devil as a teen “while my parents were watching M*A*S*H in the next room,” and he did so to orchestrate the death of a bus driver that was tormenting him. David asks what the devil looked like and is taken aback when Leland pretty accurately describes the creature in David’s visions. 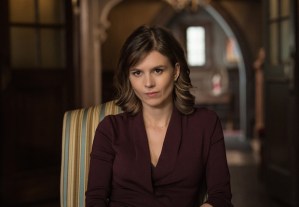 KRISTEN COMES CLEAN | It’s not until Kristen’s appointment with Dr. Boggs that we get absolute clarity on what happened with Leroux. After she ascertains that he won’t say anything to the police — because apparently therapists are only bound to do so if a client is talking about a crime that’s going to take place, not one in the past? — she blurts out, “I killed someone.”

As she tells it, she grabbed the ice axe and went to his house, then murdered him — but not in self-defense. He taunted her by saying he was going to call police about her threataening him, and when they took her away, he was going to go to her place and kill her kids. “You couldn’t find… any other way?” Kurt asks uneasily; Kristen replies no. And she’s really not bothered about what she did. “I can’t change my actions,” she says firmly, “and I wouldn’t.” They then discuss the burn on her hand, which he thinks might be a psychosomatic symptom of her grappling with committing such a terrible act. She just wants a prescription. So he writes one, then tells her to come back soon. 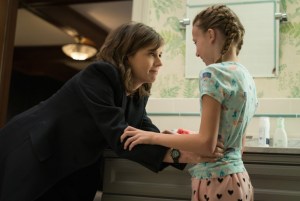 When she gets home, there are blood splatters on the ground and a bloody handprint on a wall, so Kristen grabs a baseball bat and follows the trail upstairs. Turns out, it’s only Lexis, who’s bleeding copiously from the mouth. Kristen looks and… are those fangs growing out of her kiddo’s gums? She touches one and it nicks her finger, but Mama Bouchard pushes away any horror she might be feeling and assures Lexis that everything is OK.

Ben shows up soon after, a bit squicked by the blood (it really is a LOT) but excited about his finding: The rosary’s cross is made of cobalt, which can burn when heated up, say by a nearby straightening iron or hairdryer.

BEN GETS A FRIEND | David & Co. find out that a bus driver did die in a fiery crash in 1978, but when Kristen calls Leland’s ex-wife to chat, she learns that he never took the bus and wouldn’t have had any interaction with the driver. “Of course I lied, I’m possessed,” he says when confronted with the truth. “Did you really think the spawn of the devil would be honest with you?” But he has more proof, he swears, showing them the back of his earlobe, which sports a stick-and-poke tattoo of the number 8. He reports that it’s a countdown of the number of months he’s been allotted to get them to help him, and that the tattooing happened one agonizingly painful night while he was alone in his apartment. As he’s talking about his torment, Kristen smiles.

One more thing: Leland needles Ben about what he believes, then says cryptically, “You’re going to have a dream tonight, Ben. One you’ve never had before.” Indeed, that evening, Ben is visited by a female night terror along the lines of Kristen’s George. She’s sassy and terrifying, and Ben is very afraid yet very rational. “This is from the talk today. Leland put this in my mind,” he says, fear mounting, and then he wakes up. 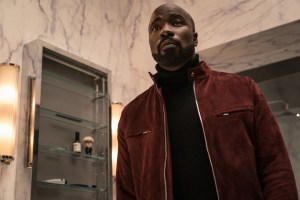 ‘YUM, YUM’ | With Leland’s permission, Kristen, David and Ben take a look around his apartment. “He’s toying with us,” she notes after finding the place stripped of nearly all personal effects aside from a copy of a book called Devil’s Bargain prominently displayed on the bedside table. Then they open his closet and HOLY GOD WHAT IN THE WHAT IS THAT THING HOLD ME there’s a toy dog that pops up and sings “Feliz Navidad,” and — as you might have guessed — it scares the stuffing out of me.

Eventually, they realize that the dog isn’t just an annoying vehicle for a jump scare: It’s an alarm. They pull out the drawer it’s in and discover two things: a terrible smell, and the sigil map. They realize that Sheryl must’ve taken it and delivered it to Leland, who has made some markings all over it. They take a photo, then put the map back. On the way out, an upside-down cross hanging over a doorway falls and bonks Kristen on the head; inside, they find a do-it-yourself tattoo kit.

They confront Leland about it at his office the next day, but he takes it in stride. And when Kristen calls his ex again, she learns that the woman is in a coma following a car accident — and Leland seems to have known it happened. Slightly ruffled, Kristen sits down in Leland’s office (as he laughs, she wonders why, and he notes “It’s just the chair — knowing who else has sat there.” Ha!) She starts to go through the psychological testing that we’ve seen her use before, the true/false questions and such, but eventually abandons it, asking “Just how insane are you, Leland?”

Leland waxes on about how she was easy to corrupt but “David will be harder. He’s the real prize.” Apparently, his plan is to have her tempt David away from the priesthood, using her daughters’ safety as an incentive to do so. The almost-Father Acosta is two months away from ordination, Leland points out, “two months of potential sexual activity. Yum, yum.” Kristen later reports to David and Ben that Leland is a psychopath with narcissistic personality disorder.

But Bishop disregards that diagnosis and recommends exorcism, with the caveat that Kristen, Ben and David be there as it happens “to be my skeptical eyes” during the proceedings. 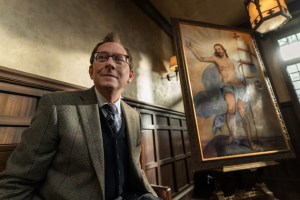 ONLINE FRAUD | If you were worried about what became of Vampire Lexis… you probably should be. Kristen takes her to the dentist for surgery to fix the problem, but Lexis winds up biting the doctor’s finger very badly, breaking (and/or severing?) it before Kristen hustles her out of there.

Elsewhere, because Ben set up spyware on Leland’s computer during their visit, he’s able to keep an eye on him in his apartment. So one night Ben opens up the software and is greeted by Leland staring into his computer screen. Soon, it becomes clear that Leland is following/mirroring Ben’s movements. And then he starts laughing manically and leaning into the screen and how can something so simple be so effectively scary?!

Now it’s your turn. What did you think of the premiere? Grade the episode via the poll below, then hit the comments with all of your eerie thoughts!