The CBS comedy wrapped on Thursday without an appearance by former co-lead Anna Faris, who vacated the role of Christy Plunkett ahead of Season 8. In the wake of Faris’ departure, Christy was shipped off to Georgetown Law School in Washington D.C., on a full scholarship.

Asked if Faris was invited to reprise her role in the final episode, Mom co-creator Gemma Baker would only say this: “We felt that it was important to honor [Faris’] decision to leave the show. The audience knows that Christy traveled a great distance over seven seasons and overcame so many obstacles in order to follow her dream of becoming a lawyer, and it felt like that story had been addressed in a satisfying way, so we didn’t revisit it for the finale.”

As for why there wasn’t a more direct reference to Christy in the episode — she was referred to not by name, but as Bonnie’s daughter — Baker maintains that “the way she was mentioned casually indicates that Bonnie and Christy are very much still in contact, and that that relationship has really healed.” (For more from our conversation with Baker about the series finale, click here.)

The most recent acknowledgment of Christy’s life out East came in the Feb. 18 episode, when Bonnie discovered that her daughter had begun dating a man named Bennett. Then in the April 1 installment, Adam stumbled upon an old billboard from Christy’s days as a stripper, which Bonnie chose to hide from her daughter. 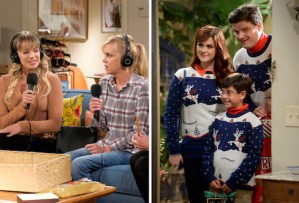 In addition to Christy, the Mom finale referenced Bonnie’s beloved “grandkids” — Violet and Roscoe — during her last share in Alcoholics Anonymous. Though they haven’t appeared on screen since Seasons 6 and 4, respectively, the sitcom had implied in episodes past that Christy maintained a relationship with Roscoe, who chose to live with his father, Baxter, and his stepmother, Candace. As for Violet, she previously made the decision to cut off all contact from Christy following her less-than-stellar childhood.

Were you hoping to see Christy — and maybe even her kids — during Mom‘s series finale?