A Christy-related crisis (and Anna Faris’ absence) forced Bonnie to take matters into her own hands on Thursday’s Mom.

#NakedPicnicMonday was called off when Adam entered the apartment and urged Bonnie to take a ride with him. He pulled up in front of a highway billboard for Mr. Naughties, a nearby strip club, and called Bonnie’s attention to the half-naked woman on the poster. “It’s some poor stripper looking confused and OH MY GOD THAT’S MY DAUGHTER!” she screamed. 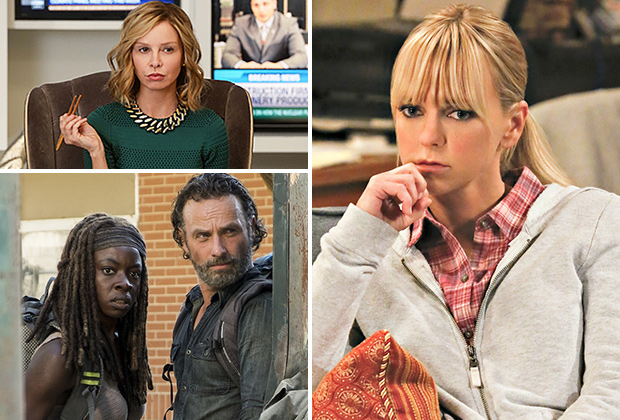 Later that night, Bonnie called Marjorie, Jill, Tammy and Wendy down to see the giant advertisement for themselves. Christy hadn’t worked as a stripper since the late ’90s, so it was at least 20 years old. “I always pictured a boyish figure under all those hoodies,” Tammy said. “To be honest, I preferred it that way.” They’d all heard about Christy’s stripper days, but seeing her 80-feet wide made it very real, and Bonnie didn’t like it one bit. “My daughter has come too far for her hoo-ha to be a roadside attraction,” she declared. “And she won’t find out, because none of us are telling her. I am going to handle it.”

The following afternoon, Bonnie visited Mr. Naughties to confront Hank the manager, played by Better Call Saul‘s Bob Odenkirk. In his office, Bonnie pled her case: “Many years ago, there was a girl — a lost girl, but it wasn’t the girl’s fault,” she explained. “Her mother never gave her the roadmap she needed to succeed in life. Actually, no one ever gave her mother the roadmap either. It’s a vicious cycle…” This “girl” had spent her formative years at Mr. Naughties, but had gone on to make something of herself and attend Georgetown Law School. “My daughter made that journey, yet she’s still up on your billboard, on Route 29,” Bonnie said. 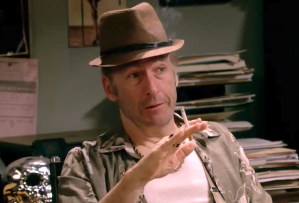 That’s when Hank realized that the woman who stood before him was Christy’s mom. He was the DJ at Mr. Naughties when Christy worked the pole, and he knew her heart was never in it. Be that as it may, “that billboard’s money,” he said. “People like vintage, reminds them of a simpler time.” He was not going to take it down. When Bonnie declared that she wouldn’t leave his office until he changed his mind, Hank called in his bouncers to have her forcibly removed.

The next day, Bonnie decided she’d deface the billboard and make it impossible to ID Christy. Marjorie caught wind of Bonnie’s plan and chalked it up to her “alcoholic brain.” She encouraged her sponsee to attend a meeting and talk it through. It was at AA that Bonnie determined her reaction was sound; she was just being an overprotective mom. She took Tammy’s car keys and drove down to Route 29. The rest of the gals — including Jill, who was thisclose to hooking up with Rod again — eventually joined her and helped her paint over Christy’s image. Christy attempted to FaceTime with Bonnie as she was defacing the billboard, but Bonnie rejected the call to keep Christy in the dark.

At no point did the episode reveal the billboard to the audience. Viewers previously got a glimpse of Christy’s Mr. Naughties tenure in Mom‘s opening title sequence.

Thursday’s Mom was the second episode in recent weeks to focus on Christy, without her actually being present. In the Feb. 18 episode, Bonnie broke down in tears as she struggled to figure out how best to utilize the bedroom that previously belonged to her daughter (read recap). Five episodes remain before the long-running comedy airs its series finale on Thursday, May 13.