Bonnie finally had a good cry about missing Christy this Thursday on Mom — the first episode since CBS announced the long-running comedy would end this season.

Throughout the episode, Bonnie was spiraling, trying to figure out how best to utilize the bedroom that previously belonged to her daughter. An arts-and-crafts room for papier-mâché? Nah. A carpentry studio to repurpose old driftwood? That wouldn’t work either.

“The minute I decide what I’m going to be doing in that room, I’m in a box,” Bonnie told Trevor. But the reason she was so reluctant to choose a course of action was tied to room itself, her therapist suggested. “Perhaps someone you care about deeply used to live in it,” he said. “You don’t want to change the room because as long as it stays the same, then you can still believe that Christy might be coming back to it. Altering it means you might have to accept the fact that she might be gone for good.”

Before their session ended, Trevor gave Bonnie a homework assignment: “Before you worry about what’s going into the room, how about you worry about packing up what’s going out?” And so, Bonnie returned home to pack up Christy’s room. She headed upstairs with Tammy and opened Christy’s closet, revealing all of Christy’s tiny hoodies. (“You’d think I have a 10-year-old son!” she quipped.) When Tammy suggested that Christy left those behind for future visits, Bonnie scoffed. “Oh, like that’s going to happen!” she said. “She used to call me every day. Now I’m lucky if she calls me once a week.”

As the conversation continued, we learned that Christy has gone on two dates with a man named Bennett. The dates went well enough to tell Wendy and Tammy (and Adam, we’d soon find out), but not her own mother. 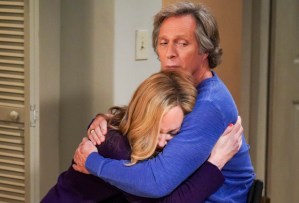 By the time Adam returned home, Bonnie was throwing Christy’s belongings out the window. Once Tammy helped him upstairs, he found his wife on the floor of Christy’s closet, crying.

“My daughter abandoned me,” she said. “I haven’t wanted to face it, but it’s true… The reason I couldn’t figure out what to do with this room is because I didn’t want to accept that Christy’s not coming back. I guess I was just was hoping she’d realize she wasn’t cut out for the winter and come home, but she’s got a good coat. She’s thriving without me.”

That’s when Adam interjected, and suggested that Christy was thriving because of Bonnie. “Christy’s not gone forever, and you’ve been so strong,” he said. “I’m not surprised it’s hitting you… Let me be strong tonight and you just let it out.” 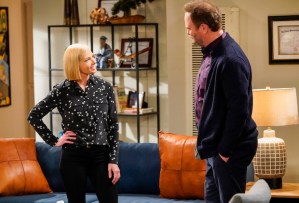 * Just a few weeks after getting dumped by police-officer boyfriend Andy, Jill has found a potential new match in Trevor. Bonnie told Jill that her therapist was off limits, but Jill paid Trevor a visit at the end of the episode to give him a handmade tissue-box cover she crafted for his office.

* Tammy attended her first Al-Anon meeting with Adam to work through her issues with Marjorie. The bickering roommates made up by episode’s end.

Were you happy to see Bonnie feel her feelings about Christy’s absence? And are you hoping now more than ever that we’ll see Anna Faris’ character return — with new boyfriend Bennett — in the series finale?