Mom‘s Season 8 premiere did not waste any time explaining why Anna Faris‘ Christy Plunkett is no longer in the picture.

It was previously reported that Faris would step away from her starring role on the hit CBS sitcom to pursue other opportunities. At the time, Faris released a statement which in part read, “The past seven years on Mom have been some of the most fulfilling and rewarding of my career. I’m so thankful to Chuck [Lorre], the writers, and my amazing castmates for creating a truly wonderful work experience.”

At the start of Thursday’s season opener, Bonnie and Adam were driving back from the airport, where they had just left Christy. That’s when Bonnie revealed the good news: her aspiring-attorney daughter was off to Washington D.C., having gotten a full ride to a top-ranked Jesuit law school.

“Every mom dreams of the day when they drop their 42-year-old daughter off at the airport to go to school,” she said. “Georgetown Law School on a full scholarship? Phew! A lot of parents would be in a puddle of tears right now.”

As to be expected, Bonnie brought the waterworks in a matter of seconds. And as soon as she reminded Adam of the sweet Father’s Day card that his stepdaughter got for him last year, he, too, bawled his eyes out.

Mom co-creator Gemma Baker previously told TVLine that Faris’ departure would not impede Christy’s happy ending. “One of the beautiful things about recovery is that quite often people’s lives get bigger and better than they could have imagined,” she said. “And that will be Christy’s experience. We are pretty sure that our audience, many of whom have been rooting for Christy since the pilot, will be happy for her and satisfied by her new path.”

While Christy did not make a final appearance in the episode, she did get in touch with her mother via telephone to check in during Tammy’s birthday sleepover (we, of course, only heard Bonnie’s side of the call). 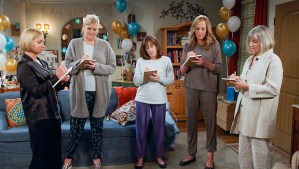 During the party, childhood games revealed adult problems. For starters, Marjorie told her friends that she needs to have a stent placed in her heart. While angioplasty isn’t as serious as, say, a heart transplant, Christy’s former sponsor was gravely concerned that she wouldn’t live long enough to see her granddaughter grow up.

Meanwhile, birthday girl Tammy had to decide whether or not to accept a call from her estranged father, who is currently serving an extended sentence for the murder of Tammy’s mom. She ultimately took his call, but kept it short. During the conversation, she found out that Dad has also adopted a sober lifestyle.

As for Jill, she initially boasted about her very active sex life with Andy, then disclosed her fear that she and Andy have very little else in common. (Ruh-roh!) And while the series has opted to sidestep the coronavirus pandemic entirely, the women took a moment to stress the invaluable work done by nurses when first-responder Wendy expressed guilt over a recent patient’s demise.

Were you satisfied with how Mom handled Christy’s off-screen departure? And what did you think of the Season 8 premiere overall? Weigh in via the following polls, then drop a comment with your full review.