Anna Faris‘ Mom departure will not stand in the way of Christy Plunkett’s happy ending.

Fans of the long-running CBS comedy can rest easy knowing that Bonnie’s daughter won’t be pushed in front of a moving train, squashed by a baby grand piano, or worse, offed by kung-fu coupon. She also won’t succumb to any one of the many vices she kicked on her seven-year journey with sobriety.

In an interview with TVLine, series co-creator Gemma Baker assures us that viewers will in fact be “satisfied” with Christy’s “new path” when all is revealed in the Season 8 premiere (airing Thursday, Nov. 5, at 9/8c).

“One of the beautiful things about recovery is that quite often people’s lives get bigger and better than they could have imagined,” Baker says. “And that will be Christy’s experience. We are pretty sure that our audience, many of whom have been rooting for Christy since the pilot, will be happy for her and satisfied by her new path.”

Meanwhile, with her daughter out of the apartment, Bonnie finds herself at a crossroads. “Christy’s absence will have a ripple effect on Bonnie throughout the season,” Baker says of Allison Janney’s character. “Part of Bonnie’s journey this year will be to figure out what she wants to do now that she’s actually grown up.”

Part of that journey will involve Adam, as husband and wife adjust to an empty nest. “With all the alone time, [Bonnie and Adam] discover that they actually really like each other,” Baker teases. “So much so that they try to help another couple achieve their level of happiness to mixed results.” 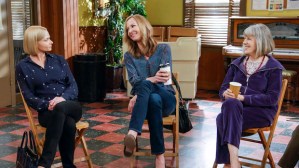 Among the couples that may or may not need Bonnie and Adam’s help are Jill and Andy, who hit a rough patch early on in Season 8.

“Jill’s desire to move their relationship along causes some friction,” Baker says. “Out of this conflict, Jill will have an opportunity to learn about who she truly is and what she wants.”

Meanwhile, a new relationship will expose “a different side” of Marjorie, says Baker, as Christy’s former sponsor “falls in love with a new fella” for the first time since the death of her second husband, Victor. In turn, “We will also get to see a different side of our other ladies,” including Wendy and Tammy, “when [it’s revealed] they don’t like him.”

News that Faris was walking away from her role as Christy, in order to pursue other opportunities, broke on Sept. 4. At the time, Faris released a statement which in part read, “The past seven years on Mom have been some of the most fulfilling and rewarding of my career. I’m so thankful to Chuck [Lorre], the writers, and my amazing castmates for creating a truly wonderful work experience.”

How do you think Mom will resolve Christy’s storyline, based on the hints above? And what are your hopes for the Anna Faris-less Season 8?