Kevin Can Wait on Monday killed off Donna in part “out of respect” for former series regular Erinn Hayes, who was let go from the CBS comedy back in June and (essentially) replaced with Leah Remini. So just how respectful was the show towards the actress and the character in its Season 2 premiere? Well, that depends on your definition of “respectful.”

Not only has Donna been killed off, but the Powers That Be decided it would be best to sidestep the specifics of Donna’s demise. Season 2 picks up over a year after the Gable family matriarch has passed, perhaps due to some horrible disease, or maybe a freak bungee-jumping accident. (Choose your own adventure!) Donna’s death is briefly addressed when Kevin receives a piece of mail from her gym. Kendra takes the postcard, and promises her dad that she’ll make a call. He then makes a joke about not throwing it out, because it includes “a coupon for a kung-fu lesson.” Cue laugh track.

Chale also receives a letter in the mail. His international visa has expired, and it’s all because Kevin forgot to mail out his sponsor form. Vanessa (Remini) manages to get Chale an interview with INS to try and remedy the situation, but Kevin goes and screws it up by joking that Chale is a terrorist. 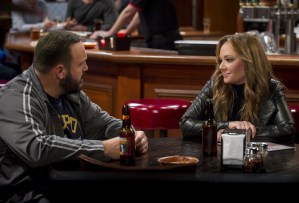 Kevin and Chale return home. With only 36 hours to spare before Chale gets deported, Kendra insists they run down to City Hall and get married, so her fiancé can obtain a green card. Kevin, however, won’t hear of it. He wants Kendra to have the wedding she always wanted, at a church where she’ll get to wear her mother’s dress.

With no time to spare, Kevin heads Upstate to retrieve Father Phillip from a Civil War reenactment, while Vanessa and Kendra deal with other wedding arrangements back at home. But just when it seems like they’re about to pull everything off, Chale is rushed to the hospital with appendicitis. They eventually decide to have the wedding in the hospital chapel, but not before Kevin and Kendra have a heart-to-heart in Chale’s recovery room.

“We’re just missing one thing,” Kevin says, “but [your mother] would be very proud of you.” Father and daughter then make their way to the chapel, where Chale waits at the altar in an undone hospital gown. Afterwards, everyone makes their way back to the Civil War reenactment, where Kendra and Chale share their first dance as husband and wife.

Will you keep watching the “new” Kevin Can Wait with Leah Remini back by her King of Queens hubby’s side? Weigh in via the polls below, then hit the comments to flesh out your thoughts.