Question: Since Episode 5 of The Flash is called “Girls Night Out,” is there a chance the girls will actually speak to each other? And might they do so at a party in anticipation of a certain wedding? —Tatiana
Ausiello: Thanks for your question, Tats. (BTW, nice work on that Orphan Black finale.) Here’s what Flash EP Todd Helbing had to say about Ep 5: “It’s really fun. The girls [including a visiting Felicity Smoak] go and have a night out in Central City alone, without the guys. And they get into some trouble.” And to the second part of your Q about the possibility of the outing being a bachelorette party for the potential future Mrs. West-Allen, Helbing responds with a laugh, “Possibly.” 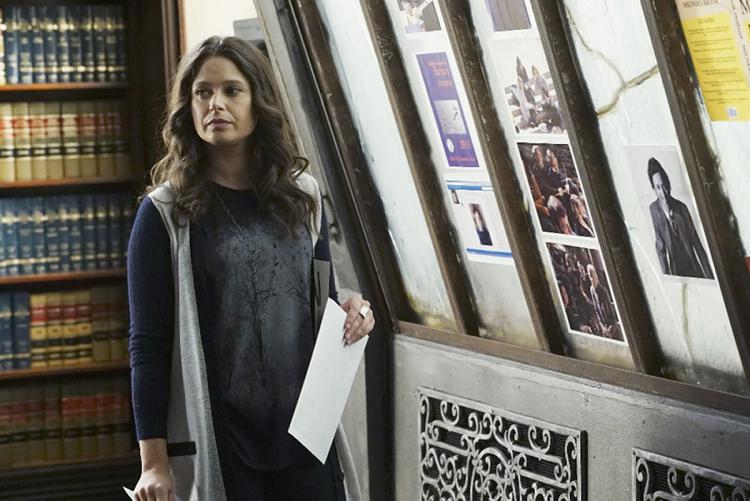 Question: Now that Quinn has replaced Olivia as the head of Scandal‘s Olivia Pope & Associates (aka OPA), will the name of the company change as well? —Jeffrey
Ausiello: It will indeed! I can confirm that when Scandal returns with its final season on Oct. 5, the sign on the outside of the office door will be changed to Quinn Perkins & Associates (aka QPA). And I can also confirm that Quinn has hired two new sleuths to work under her, and word on the street is they look a lot like these two fellas. BONUS SCOOP: The show’s third episode — directed by cast member Scott Foley — will largely focus on Fitz’s post-POTUS life in Vermont.

Question: Something new on This Is Us? —Jacob
Ausiello: New timeline alert! It looks like we will witness first-hand just how heinous Jack’s dad was to him as a kid because, rumor has it, the show is on the prowl for a young actor to play Milo Ventimiglia’s 10-year-old doppelganger.

Question: Did Elementary get a full-season order for Season 6? —Cobra
Ausiello: With CBS holding the Sherlock procedural until midseason, the network has thus far only commissioned 13 episodes. But that number could increase, especially if one of the Eye net’s new dramas flop. “There’s always a chance we could [return] earlier,” confirms EP Rob Doherty. “If we were, it stands to reason there might be additional episodes ordered. We are in ‘wait and see’ mode at the moment.” An added complication: This “could be our last season,” Doherty notes. “We’re not sure yet. We want to do everything we can do to keep it from being the last season. But we’ll see where we are in a few months.” 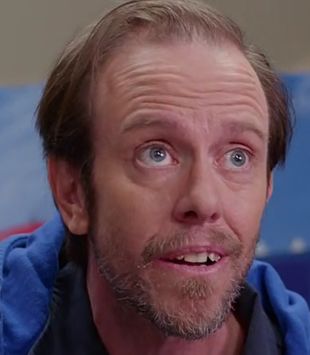 Question: Excited for Superstore to come back, but I have to know — did Brett survive the tornado?! –Allison
Ausiello: I’m not at liberty to reveal who did (or didn’t) survive last season’s twist(er)ed finale, but I can tell you that a Season 3 episode is titled “Sal is Dead.” So while the verdict is still out on Brett, I’m thinking it’s Sean Whalen’s recurring Cloud 9 employee that you should really be worried about.

Question: I almost don’t want to know the answer to this, but will we learn how Erinn Hayes’ Donna died on Kevin Can Wait? —Jen
Ausiello: Negatory. For the time being, the CBS sitcom plans to sidestep the specifics of Donna’s demise. “We haven’t addressed it in the story,” reveals exec producer Rob Long, who confirms the action will pick up a year after the character’s passing. “For right now, it’s really a story about a family [reeling] without a mother and [Kevin] dusting himself off and rejoining the work force.”

Question: Any possibility of having an all-girls mission during Season 6 of Arrow? —L.A.
Ausiello: “You know, we always talk about that — across all the shows. And it’s totally possible,” Arrow boss Marc Guggenheim answers. “But truth be told, I wouldn’t want to do it unless we could figure out a way to get Sara (played on Legends by Caity Lotz) in there as well. One of my favorite episodes was 406, where we had Speedy, Black Canary and Canary all fighting side-by-side-by side together, and that was a blast. Seeing three badass women was really, really awesome. [An all-girls mission] is on our ‘bucket list,’ but I really want to figure out a way to get Sara in there as well.” 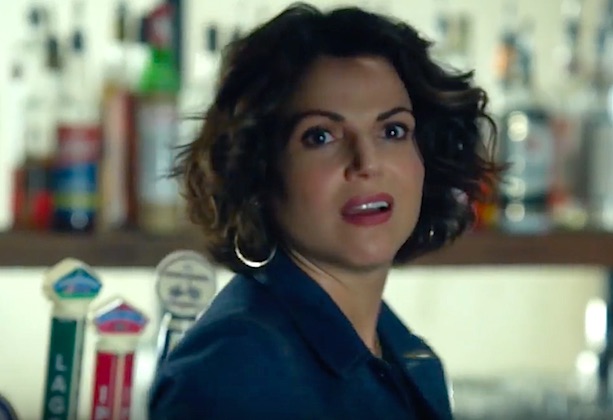 Question: Once Upon a Time‘s second episode flashes back to Hook’s life after his and Emma’s “happy beginning,” Episode 4 is about Rumple/Belle. When do we get one about Regina? —Dawn
Ausiello: Regina is a “huge part” of Season 7’s early episodes, co-creator Adam Horowitz told Matt Mitovich, so during that stretch viewers will gather bits and pieces of her own life before the latest curse hit. “Her [-centric episode] will probably be Episode 6,” ventures co-creator Eddy Kitsis, “but she is in all the flashbacks for [Episodes] 2 and 3, significantly. Regina fans have no need to fear — she’s front and center as always.”

Question: Any scoop on Grey‘s Anatomy‘s Jo and Alex? —Brock
Ausiello: Don’t count out interloper Andrew just yet. Even though Jo seemed meh about his infatuation with her, Giacomo Gianniotti hints that his portrayer may make another go at it. “I think he just jumped the gun a bit,” the actor shares. “Jo just went through this crazy traumatic experience [with Alex]. It was so fresh. I think he should’ve waited a little bit. And if he does wait a little bit [before approaching her again] she might have more of an open mind.”

Question: Last season we saw Scorpion’s Sly campaign to be alderman. What is he getting into this season? —Stephanie
Ausiello: To kick off Season 4 on Monday, Sept. 25, Ari Stidham tells us, “There’s a good amount of Megan O’Brien in the first two episodes” — as in Sly’s wife/Walter’s sister, who died midway through Season 2. “The character (played by Camille Gauty) doesn’t come back, but there’s a lot of stuff for Sly as far as Megan goes.”

Question: Lethal Weapon Season 2 scoop, please. —Danielle
Ausiello: I can exclusively report that True Blood‘s Lynn Collins will recur in Season 2 as Molly. She’ll first appear in Episode 6, when she’ll show up as the lady friend of a guy named Jake (played by Linds Edwards, whom Nashville fans may recognize as Rayna’s stalker, Carl). Jake is Riggs’ best friend from childhood, and — fun fact! — Edwards is a good pal of Lethal star Clayne Crawford’s; the two even worked together on Rectify. Molly will be around for a “bunch of episodes,” showrunner Matt Miller tells TVLine, so naturally, we wondered if she is a romantic interest for the grieving cop? “It doesn’t start out that way,” Miller says. “It may evolve.” 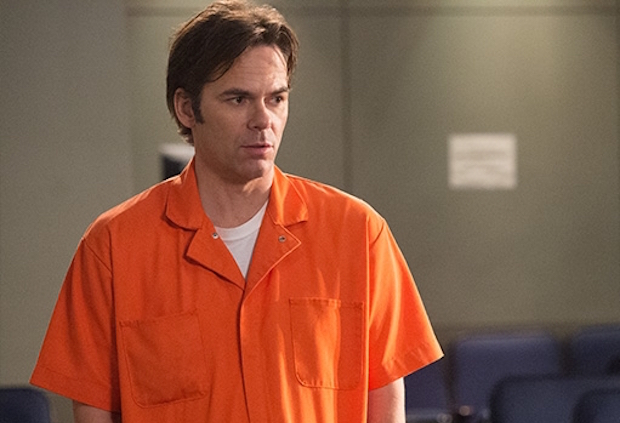 Question: Season 6 of Major Crimes is coming. I was wondering if you can give us some scoop about the new season? —Ilona
Ausiello: The TNT drama is giving us a Philip Stroh origin story! A Season 6 episode (we’re guessing this one) will introduce us to the 16-year-old version of Billy Burke’s recurring villain.

Question: Please tell me there’s a chance Supernatural will do the right thing and give us some Crowley in Season 13. —April
Ausiello: Mark Sheppard may’ve closed the door on his character’s return, but the show hasn’t. “We love Mark,” executive producer Andrew Dabb tells TVLine. “We think he’s awesome, and he’s been great on the show. At this point in time, [his potential return] is a little up in the air. Where we took Crowley, where he ended up, made sense for us in a lot of different ways. I would never write off anyone coming back on the show, but I’d be lying to you if I said there were plans to bring him back in, like, Episode 3.”

Question: I’m dying for a scoop on Supernatural‘s animated episode. Will we actually meet ‘toon versions of Sam and Dean? Spoil me crazy, please! —Cordell
Ausiello: At Comic-Con, Jensen Ackles teased that the installment is “very Scooby-Doo-esque,” but “slightly darker.” And, yes, the boys will definitely get animated. (Ackles’ reaction to his cartoon self? “‘Yes!’ How cool is that? I grew up watching Scooby-Doo. Now I’m, like, on it.”) And while executive producer Andrew Dabb says the hour is “about as far outside of the box as we get” in Season 13, there is another fun adventure in store for the Winchesters. “We’ve got an episode coming up after our midseason break, which we’re essentially titling ‘Stakes on a Train,'” Dabb shares. “It’s our version of a train heist with vampires.”

Question: What’s next for Sylvie Brett (Chicago Fire) and Antonio Dawson (Chicago PD)? Will we see them together again soon? — Marybelle
Ausiello: “We are going to reignite the flames that had died unexpectedly last season, because we really like Jon Seda and Kara Killmer’s chemistry,” Fire showrunner Derek Haas tells TVLine. “They will be seeing each other again under trying circumstances and deciding, ‘Maybe we were too quick to walk away from each other. We’re at different times in our lives now.’ They’re going into this second time with eyes wide open.”

This AAnd That…
♦ The title of Lucifer Episode 5 is “Chloe Does Lucifer.” Commence speculating about possible alternate meanings.
♦ Mini-Blind Item: A relatively new and popular one-hour drama series is about to venture outside its wheelhouse and dabble in the supernatural.
♦ ‘Memba that whole social media kerfuffle a few months ago wherein The Blacklist‘s Megan Boone kinda-sorta shaded NBC for its Red-centric promos? Well, I asked NBC chairman Robert Greenblatt if he had seen Boone’s tweets (he confirmed that he had) and what he thought of them. “I really don’t have anything to say about it,” he responded. “It’s not a discussion that bodes well for anybody. The show is still on, it’s one of our classics and I think she’s amazing.”
♦ Did you hear? I have a book coming out on Sept. 12. I’m really proud of it. You can pre-order it here. I’m also going on a book tour, and a few very special guests are tagging along. See graphic below for details! (Additional reporting by Andy Swift, Kim Roots, Ryan Schwartz and Vlada Gelman) 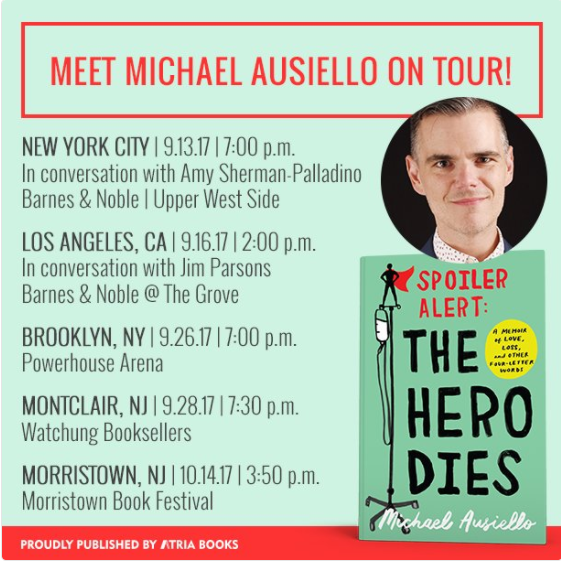