THE PERFORMANCE | FX’s vibrant LGBTQ drama is taking its final bows… and Porter is making sure we miss him an awful lot when he goes. The supremely talented performer already has an Emmy on his shelf for playing boisterous ball emcee Pray Tell, but we’re ready to skip this year’s nominations and just hand him another one after the second half of this week’s season premiere, as Pray Tell stared down an intense crossroads in his life.

As Season 3 began, the HIV-positive Pray Tell was losing hope for a cure and drowning his fears in alcohol, stumbling around in a permanent stupor. The premiere’s second half centered on Blanca and the gang confronting Pray Tell about his drinking, and after he pulled off a flawless En Vogue lip sync — which could’ve earned Porter this win all by itself — Pray Tell lashed out at his friends when they tried to get him to go to rehab, with Porter angrily spitting venom in all directions. But his tough act crumbled when boyfriend Ricky threatened to move out if he didn’t get sober, with Porter collapsing in his arms and begging between sobs: “Everybody leaves me… I need you to stay.” He quickly snapped back into attack mode, though, when Ricky insisted on leaving, with Porter deftly demonstrating how Pray Tell’s anger stems from deeply buried pain.

After a friend’s brush with suicide was averted, Pray Tell faced his own harsh reality, and Porter let us see the toll his addiction had taken on him as a worn-out Pray Tell confessed to Blanca: “I drink because I hate myself, and I hate myself because I drink.” Pray Tell did eventually go to rehab, and we applaud that — not only because it means he’ll get the help he needs, but because it means we’ll get to enjoy more of Porter’s commanding performance in the final weeks of Pose‘s swan song. 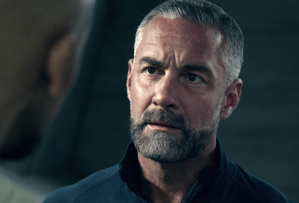 HONORABLE MENTION | Of the many approaches to “bad cops” this TV season, S.W.A.T.‘s is among the most unexpected, by having Deacon struggle with the totality of his responsibility in outing racist officers. And Jay Harrington in turn has deftly explored Deke’s conflict. Confirming that newbie Lee Durham belongs to a group that meets over beers to grouse about minorities, Deacon looped in Hondo… and considered his duty done. When Hondo nudged him to get these cretins on tape, Deke balked, insisting, “Cops don’t turn on other cops” — though the look on Harrington’s face indicated unease with that stance. Harrington then was stellar in a scene where Deacon wondered, to wife Annie, why Lee groomed him in the first place. Having for years laughed off the sort of remarks Lee makes, he fretted, “What kind of person does that make me?” He is no racist, sure, but to Hondo’s point, Deke soberly realized, “Maybe that’s not enough anymore.” 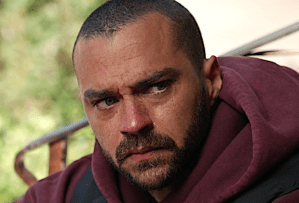 HONORABLE MENTION | As the news was breaking Thursday that Jesse Williams was leaving Grey’s Anatomy, there he was, on screen, giving a performance in “Look Up Child” that ensured that we all knew what a talent the show (and we) would soon be missing. One moment, he was playing Jackson as charming and funny, capitalizing on his longstanding chemistry with Sarah Drew for the “Japril” reunion. The next, Williams was reminding us of the passion that burned within his character, the fire that drove him to want to change the world for the better. Then, in arguably the actor’s most moving moments, he picked the scabs on the wounds inflicted by his father’s abandonment, bringing to the surface decades of hurt and resentment. By the time the episode was through, Jackson was ready to come into his own — and there could be no doubt that Williams already had. 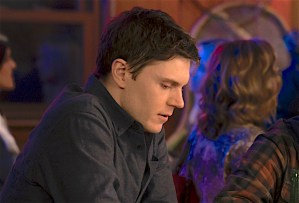 HONORABLE MENTION | Playing drunk is an notoriously tough task for an actor… so how did Evan Peters make it look so easy this week on Mare of Easttown? The American Horror Story vet slurred his way through one of the best drunk scenes we can remember, as his county detective Colin Zabel got sloshed at a high school reunion. Peters stumbled, giggled and apologized repeatedly as Colin took too many shots, confessed to Mare that he’s avoiding an ex who broke off their engagement — and even awkwardly hit on Mare (!). We swear Colin’s accent even got stronger the more he drank; just the way Peters hollered “F—k yesssssss!” to more shots was a masterclass in and of itself. Peters has brought a breath of fresh air to what can be a grim drama, and we can’t help but raise a glass to his impressive acting-under-the-influence skills.