Pose is jumping forward to 1994 for its third and final season — and O.J. Simpson isn’t the only one running away from something.

The first hour of Sunday’s premiere catches us up with Blanca and the gang: She has a new boyfriend named Christopher, played by Jeremy Pope; Elektra’s S&M dungeon is getting raided by the cops (“F–king Giuliani, f–king with my goddamn coin”); Papi is finding success as a talent agent, and Angel is jealous that his attentions are elsewhere; and Elektra’s former protégé Lemar has formed the upstart House of Khan and is sweeping the balls with a vicious, confrontational energy. 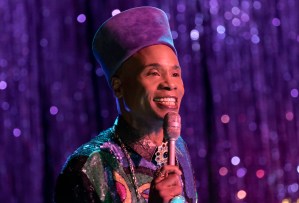 But Pray Tell has changed the most: He’s become a stinking drunk, slurring his way through his emcee duties and sneaking swigs from a flask while working as a Chanel No. 5 sprayer at Macy’s. He’s tired of going to funerals of friends he’s lost to AIDS — “How many more of these are we gonna have to sit through?” — and losing hope that a cure will keep him for meeting the same fate. Also facing that fate is another protégé, Cubby, who’s on the brink of death at the hospital, with Blanca tending to him as a nurse’s aide. And then the world stops short, because the O.J. Simpson chase is on.

Blanca invites the whole family over to watch, with Pray Tell drunkenly ranting that “when white folks love you, you become raceless.” (Elektra thinks O.J. is innocent; when she used to go to his games, “he couldn’t keep his eyes off me.”) Angel and Lulu join the party… but they’re sneaking hits off of a joint laced with crack. (Uh-oh.) As Pray Tell gets more and more sloppy, Damon pulls him aside to share his Alcoholics Anonymous book, but Pray Tell isn’t having it: The world is awful, he says, and he just wants to have some fun. Blanca calls them all to the table for dinner and announces that she wants to revive the House of Evangelista to keep Lemar’s house from trashing the balls. The others are reluctant at first, but Blanca rallies them with one of her inspirational speeches — “We rose from the bottom, and we became stars” — and they all eventually get onboard.

Blanca admits to her doctor boyfriend Christopher that she wants to study to become a nurse… and he wants to introduce her to his parents. She freaks out a little, thinking they’ll judge her, but she gets dolled up and ready to see them — when she gets a phone call. Cubby doesn’t have much time left, so she and the gang gather at his bedside, sharing stories with his mother. Right after Cubby passes away, Lemar shows up late and is rude to everyone, which leads to Pray Tell slapping empanadas right out of his hand. That settles it: House Evangelista will walk in the next ball against House Khan, in Cubby’s honor. 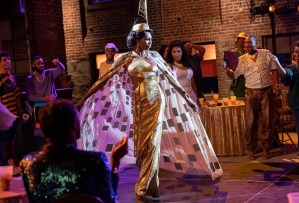 At the ball, Evangelista sweeps the judges’ vote, led by Elektra strutting her stuff in a towering gold headpiece and cape. They take the win, and Blanca is a good sport, applauding House Khan’s effort and donating the prize money in Cubby’s name. They celebrate with dinner at a Chinese restaurant — and Christopher shows up to meet Blanca’s friends for the first time. Plus, Blanca takes the plunge and applies to nursing school.

The second hour belongs to Pray Tell (and Billy Porter): He’s quickly spiraling downward, drinking and popping pills, and Blanca thinks he needs an intervention. She brings in an expert who asks the gang to all write letters to Pray Tell, telling him how his drinking has affected them. (Blanca adds that she “already lost Damon,” who relapsed and left town to live with his cousin.) Rehab will cost a lot — $2,500 for a month — but Elektra calculates that if they sweep all the prizes at the next ball, that could pay for it. So she goes into dominatrix mode (her natural state, of course) and whips the House of Evangelista into shape, drilling Ricky on his dance moves and picking out the perfect couture dress for Angel. 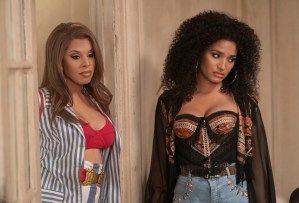 Angel and Lulu are having trouble kicking the crack habit, though, and their loved ones are starting to notice: Papi tells Angel he can’t marry her if she’s still smoking, and Elektra pulls Lulu aside and orders her to get her head on straight. Meanwhile, Blanca finally has that dinner with Christopher and his parents, and it goes well — until Christopher’s mother starts asking probing questions about having kids, and Blanca picks up on the subtle shade being thrown her way. (She doesn’t tell them she’s trans, either.) Plus, Pray Tell visits an ailing Castle, who’s saving a bunch of sleeping pills “for a rainy day,” daydreaming of getting a room at the Plaza and taking all of them. He offers Pray Tell some methadone: “It’s a nice buzz.”

House Evangelista is the big winner at the ball, with Pray Tell earning 10s across the board for his fierce En Vogue lip sync… but the celebration is cut short when Castle collapses with a seizure and has to be carted away in an ambulance. At family dinner, after Pray Tell declares he drinks wine “for the antioxidants,” the others say they’ve arranged a getaway for him. Really, it’s rehab, and they can pay for it with the prize money. Pray Tell seems open to it at first, but when they start reading their letters to him, he gets defensive — and mean. When Angel pipes up, he tells her, “If I wanted advice from a crackhead, I would go out on the street and ask for it,” and when it’s Blanca’s turn, he snaps that Christopher is only with her because she’s an “HIV charity case.” As he storms out of the apartment, a fed-up Elektra yells, “Let him drink!”

His tough façade crumbles, though, when Ricky packs up and threatens to move out if Pray Tell doesn’t get help. At first, Pray Tell belittles him, telling him no one else will ever love him like he does. But as Ricky reaches the door, Pray Tell grabs at his luggage and breaks down in sobs: “Everybody leaves me… I need you to stay.” Ricky does leave, though, and while Angel pledges to get clean for Papi before their wedding, Blanca has another awkward encounter with Christopher’s mother. (When Blanca comes out as trans, Christopher’s mom says her husband is a psychiatrist: “He treats transsexuals.”) Blanca walks out, and Christopher supports her, telling his mom he loves Blanca and they’ll lose him if they don’t accept her.

Pray Tell takes baby steps towards sobriety and mends fences with the emcee council, but he notices Castle isn’t with them. Pray Tell finds him in a room at the Plaza… but he didn’t take the pills. He wants to live, he cries to Pray Tell, and Pray Tell does, too. Finally broken, he admits to Blanca: “I drink because I hate myself, and I hate myself because I drink.” He doesn’t want to feel like this anymore, and she drives him to the rehab center to the strains of Mariah Carey’s “Anytime You Need a Friend,” with them exchanging “I love you”s before he walks inside.

Give the Pose premiere a grade in our poll (think of an “A” as 10s across the board) and drop your thoughts in a comment below.