The promos for Thursday’s Grey’s Anatomy led us to believe that “Look Up Child” was going to be Japril: The Movie, Part 3. And Sarah Drew told TVLine that the episode provided a little bit of closure for Jackson and April. What we didn’t know, though, was that it was going to set up Jesse Williams’ imminent exit as Jackson. What the whaaat? Here’s everything that went down.

‘I KNOW THIS SEEMS IMPULSIVE AND OUT OF NOWHERE, BUT… ‘ | As the episode began, Japril flashbacks played — including one in which Jackson wistfully watched as April married Matthew — while Avery drove through the rainy night. Earlier in the day (maybe the day before?), he had shown up at father Robert’s diner, where they stared each other down for a moment. “Hey, Dad,” said Jackson. From there, we cut to him arriving on April’s doorstep in the rain and a whole lot more flashbacks. Was he suddenly, impulsively regretting their divorce? Back at Robert’s, Pops said that he’d wanted to call during the pandemic but figured that Jackson hadn’t really wanted to hear from him. Whatever, grumbled Jackson. He was there for answers, which Robert said that he’d be happy to provide so long as he helped pack lunches.

As they did so, Jackson related that Catherine had recently said he sounded like Robert when he’d remarked that he didn’t see change coming from within the foundation because of the bureaucracy. “That does sound a little like me,” admitted Robert. As he set Jackson to work slicing turkey, he explained that with all that Avery money, everyone expected him to fix everything. “I was never gonna be the son my father wanted, because I didn’t want to be the man the role required,” Robert said. Then it hit him: That was why Jackson was there — he was thinking of leaving it all behind. 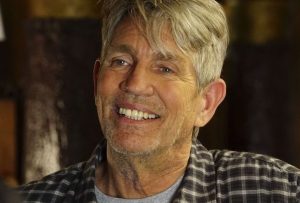 ‘I HAVE A WEIRD BANK VOICE NOW?’ | At April’s, Harriet’s mom fretted to her ex because the little girl was running a fever. “COVID just makes everything feel so big!” she told Jackson. Harriet had been sick for a couple of days. Also, “she needs a bath — she smells like feet,” said April. “That’s you,” Jackson said as he put on some music that didn’t sound in a million years like anything that his former wife would listen to. After the power went out during the rainstorm, Jackson reassured April that they didn’t need to take Harriet to Grey Sloan to see doctors, they were doctors. Soon, April noticed how cagey he was being, prompting him to confess that he had gone to visit his dad to see if he was right about what he wanted. “He couldn’t step up or into his own,” Jackson said, “but I can. I want to take over the foundation.”

Cutting back to the diner, Jackson marveled at the bubble that Robert had created for himself. Jackson felt stuck, wanting the foundation to do better but wondering if it was already too late. “Maybe you could let go of the idea that it’s your job to save the world,” said Robert. True, Jackson said, while dismissing Robert as a white guy with money who was always going to be OK. Why had Robert left him and Catherine, Jackson wanted to know. It had really messed him up, set him up to run when things got rough. He always had to fight the Robert in himself. Of course, as Jackson became more and more upset, he wound up cutting his hand in the turkey slicer. Post-commercial, Jackson informed April that he wasn’t thinking of running the foundation, he was doing it. But to do so, he had to move to Boston — and he wanted April and Matthew to move, too. Jackson didn’t want to go without Harriet, no way, no how. He’d set the couple up with jobs, they could do and build whatever they wanted. 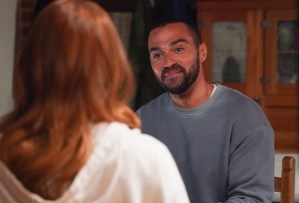 ‘YOU DON’T JUST UP AND MOVE ACROSS THE COUNTRY ON A WHIM’ | Reeling from Jackson’s ask, April reminded him that he’d been running from his name as long as she’d known him. In response, he accused her of not wanting to inconvenience her perfect little life. “You have never wanted any of this, and I’m just supposed to roll with this?” she asked. “What happens if it doesn’t work?” Jackson didn’t question it when Matthew had proposed to April in front of him and married her that same day. “I had your back. I’m just asking you to do the same for me.” She wanted him to be happy, but running the foundation? “You’re not that guy,” she said. “I don’t think you ever will be.” Jackson assured April that she could still do good work in Boston — even better work. And Matthew would follow her. That was why he liked the guy — ha.

Jackson finally challenged April: Wouldn’t she do anything she could if she saw a chance to be who she was really meant to be? That, she would. After Harriet’s fever broke, Jackson pleaded with April to let him create real racial equity at the foundation, make real change and be the father that his own never was. “And all I need to do is turn my life upside-down,” she said. Which was about the size of it. Back in the diner timeline, Robert admitted to Jackson that he’d left because that was simply what he did, and he’d convinced himself that his son would be better off without him. “My entire life, how could you think that didn’t matter?” Jackson spat. Well, Robert had screwed up. And he knew it now. He regretted running. Guess the apple doesn’t fall far from the tree, said Jackson. But he was nothing like his dad, Robert argued, “because you have it in your soul to do the right thing. If you don’t want to stay, don’t. But don’t blame it on me, because on your worst day, you are 10 times the man I am.” 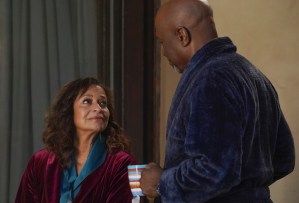 ‘I’VE GOTTA SHOW HARRIET THAT WE CAN PUT OUR MONEY WHERE OUR MOUTHS ARE’ | As the hour drew to a close, Jackson showed up at Catherine and Richard’s, where he told his mother that he felt a deep-seated calling to take over the foundation and work toward true equity. “If that means dismantling the whole medical system,” he said, “that’s what I want to do.” From there, he left to talk to April… so yeah, this episode was all over the place timeline-wise. The morning after Japril’s long conversation, she decided that Jackson was, in fact, the guy to change the world. “Why is our timing so terrible?” April wondered. That was kind of their thing, he cracked. At last, he took off the pressure to move to Boston, only for her to say that he deserved this. Jackson would be glad to talk to Matthew for or with her, but… uh, there was no need. “We split up,” she admitted. Matthew had denied for so long that he didn’t hate April for everything that had gone down between them, but… “God’s plan isn’t so easy to understand.” Ultimately, Matthew had stayed in Philadelphia with daughter Ruby after his sister had gotten sick.

Was April OK? “It’s hard to say,” she said. But hey, she was moving to Boston. “So fingers crossed for new horizons.” So, what did you think of Grey’s Japril reunion? His big ask of April? The shock of Jesse Williams’ imminent exit? The comments section is now open for business.