If last week’s Law & Order crossover left you wanting more Stabler/Benson, boy, do we have an Organized Crime episode for you.

The SVU spinoff’s second episode continues The Ballad of Liv and El with a scene that finds the former partners having a heart-to-heart in Benson’s parked car after she drops Noah off at school. Stabler climbs into the passenger’s seat, hands Benson a coffee and launches into one of the most fraught conversations in their relationship. (And after last week, that’s saying something.)

Olivia wonders what had happened to make him act so weird when she went to his apartment building at the end of the Organized Crime premiere. (Read a full recap.) “You startled me, that’s all,” he says, but she doesn’t buy it. “Look, Elliot, I don’t want to push you,” she says. “And I’ll back off if you want me to.” He looks at her, unsmiling, and says: “I do. Back off.” Oooh COLD.

We all know that Stabler wants to distance Olivia from this line of questioning because a) in the previous episode, he’s been doing some not-so-kosher stuff related to the investigation of Kathy’s murder, and b) he doesn’t want to jeopardize her career by having her associated with it. But Olivia doesn’t know that. However, she is aware that there’s something more going on. So our girl presses, and we love her for it. 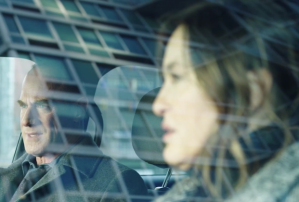 “You have PTSD,” she whispers, which causes Elliot to laugh a little too much. He counters that he’s been on the job for 35 years, but she points out that he JUST lost his wife. “Yeah, I think I remember that,” he scoffs. But she’s undeterred. “Elliot, I’m a captain now, and my job is to take care of my people. To make sure that they’re good and they’re solid and they’re together enough to do the work,” she says. He acquiesces and says he’ll address his post-traumatic stress disorder, but I’m not clear on whether he means it or he’s just saying it to get her off his back.

AND THEN WE GET TO THE GOOD STUFF. She wonders if he’s told his new boss, Sgt. Bell, where he was on the night that Manfredi Sinatra was murdered at Coney Island. (Psst: He hasn’t.) “I don’t know where you were,” she says, kindly but firmly. “I only know that you were jumpy, you look exhausted, you have circles under your eyes, and I am worried about you, Elliot.”

This hits Stabler in his soft parts; he needs a minute as he tells her, “Thanks for that.” Liv misinterprets his tone, quickly adding, “I didn’t mean to be patronizing.” But he was sincere. “No, I know,” he says. “It felt good to hear that. Liv, you mean the world to me. I think I just needed to hear you say that.” WHO ELSE IS HERE FOR SOFT STABLER AND HIS BROKEN SOFTNESS? Or maybe not that soft: Before he gets out of the car, he warns her one more time, ” Back off.”

Just in case you’re not as invested in this relationship as this clearly objective and not at all hysterical journalist is, here are some of the other important (though, let’s be honest, nowhere near as important as the above) things that happened during the episode, titled “Not Your Father’s Organized Crime.”

* Bell rounded out her team with Jet Sloomaekers, the hacker-type Stabler suggested last episode; Det. Diego Morales, a tech specialist; and Freddie Washburn, Bell’s old partner from when they worked in Narcotics. Stabler doesn’t care for him much. 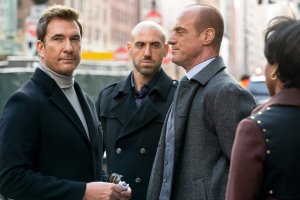 * Stabler and Richard Wheatley met when Bell and Stabler ambushed the pharma tycoon in front of his building. They accused him of being involved in the robbery of a shipment of COVID-19 vaccines; he, of course, denied it. Later, Richard pitched the men in his father’s organization with an idea: to allow him to modernize their business.

* Near the end of the episode, Stabler told Bell about being at the Wonder Wheel the night Sinatra died. But she stopped him from telling her about taking the mobster’s phone — and it’s clear that though she might not officially approve, she kinda approves.

* But then, as Stabler returned home, he was beat up and pistol-whipped  by two masked men — one of whose eyes really looked like those of Wheatley’s bodyguard/driver — outside his apartment building.

Your turn! What did you think of the episode? Hit the comments below and let us know!