Perps of the world, you’re on notice: Law and Order‘s Elliot Stabler is back on duty.

The detective, played by longtime SVU star Chris Meloni, returned in a crossover event Thursday that ended with the premiere of his new spinoff, Law and Order: Organized Crime. In a moment, we’ll want to hear what you thought of OC‘s first episode. But first, a quick recap of the hour. (And if you want to read a recap of the SVU ep that preceded it, here you go!)

We start out with Stabler getting chewed out for speaking directly to the bad guys at the courthouse, which could’ve greatly jeopardized the case. He maintains that he’s just trying to get closure on the bombing that killed Kathy, “for my children.” Then he meets up with Liv at a sledding area where Noah is having some fun; she gives El some notes on the case, just in case he gets bounced off of it. They’re talking about his life in Italy, and it’s light and friendly until he mentions how much she would’ve loved where he lived. “I can’t,” she says, somber. “I get it,” he says sadly. Then he mentions that he was asked to give a speech at her awards ceremony but he’s not a fan of public speaking. However, “I wrote this,” he says, handing her a letter, “and I was going to give it to you that evening.” MY HEART. Noah calls, and she turns to leave. Stabler watches them wistfully.

We get drawn into Stabler’s work with the Intelligence Unit, which involves a raid on a warehouse that unearths counterfeit documents, including a duplicate of Stabler’s Italian ID card. The warehouse also contained a hookah joint run by man who was murdered; his mother, Angela Wheatley a math professor (played by Bones‘ Tamara Taylor) is uninterested in helping with the investigation. 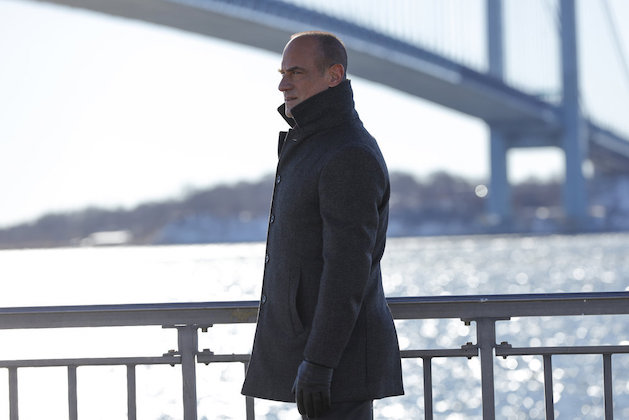 The Stablers all gather to discuss the funeral; it’s the first time in the crossover we see Eli, Maureen and Lizzie. It appears that Kathy was under the impression that Elliot wasn’t working dangerous cases while they lived abroad. It also appears that there’s some dissension about El’s announcement that he’s not going to return to Rome. At the burial service, which Olivia attends, Eli kneels at his mother’s grave and sobs. Stabler gets down next to his youngest son and holds him, reassuring him, “I’ve got you.” 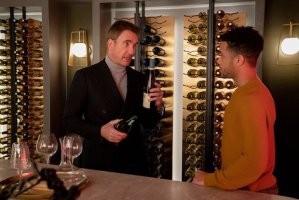 OK, back to the case. Stabler meets briefly with a recently released from prison mobster named Sinatra (played by Chaz Palminteri), who owned the warehouse in question. Stabler asks if he was the one behind the bombing. “If I wanted you dead,” the older man says, “you’d be the one in the ground right now.”

Then we follow Sinatra to his son’s house. Richard (American Horror Story‘s Dylan McDermott) is a rich guy with snooty tastes who was running the club in the warehouse while his dad was in the clink, and now Sinatra is mad that the police are sniffing around. Richard is also doing something in Puglia, Italy. Not going to lie — I’m not 100 percent clear on what’s going on here, but I assume we’ll get more as the season goes on.

Back at the clean-and-pretty part of the NYPD (no grimy squad rooms here!), Stabler is happy to learn that the department is opening a task force into the bombing/warehouse situation. But, to his chagrin, he’s not going to run it. That honor goes to Ayanna Bell (Deputy‘s Danielle Moné Truitt), who gives serious side eye to Stabler’s old-school ways. She gives us more background on Sinatra’s son, who started one of the first online pharmacies and who is involved in illegal drug stuff. Oh, and Richard’s last name is Wheatley: He was married to the professor at one point and took her name, mainly to tick off his father. When they divorced, two of their sons went to live with him; the other, the one who was running the hookah lounge, chose to live with her.

Stabler and Angela are discussing all of this when he notices a guy on a moped acting squirrelly. Pretty soon, they’re under attack. The biker and an accomplice attempt a drive-by shooting; Elliot pushes the professor out of the way and they’re OK, but it’s a close thing. 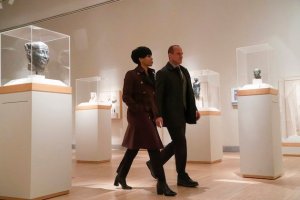 The next day, Stabler admits he doesn’t know whether the hit was on him or Angela. Bell reminds him that while their search may drag up the people who killed Kathy, it’s not their prime directive: “Our charge is to bust an international drug cartel that skated under the radar for two decades.” Stabler says he understands… then immediately tunes her out when he gets an encrypted message summoning him to the Coney Island Wonder Wheel at 9 that night for information on who murdered Kathy.

But while Stabler is on his way, Richard finds his father at the Wonder Wheel and lets on that he knows that Sinatra was planning on selling him out to the cops. As they’re riding the giant ferris wheel, it stops with their car at the top. Sinatra, a lifelong racist, apologizes for all of the terrible things he’s said about his mixed-race grandchildren. But Richard isn’t having it. And by the time Stabler arrives, he finds Sinatra with a bullet through his forehead. So he opens the dead man’s eyes wide enough to be able to unlock his phone using facial recognition, then pockets the device. Same ol’ Stabler! 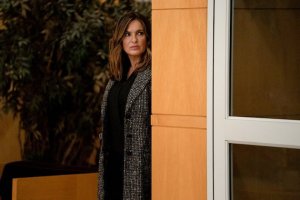 Back at Richard’s house, guess who’s there: Angela! She takes him to task for the drive-by (“I told you I could handle it”) and it’s clear that they’re not as estranged as she led Stabler to believe. And THEN, although we’ve already had a point-blank murder in this hour, the ABSOLUTE WORST THING POSSIBLE takes place. As Stabler makes an anonymous call about the dead body and nervously heads back into (what I think is) his apartment building, Liv is there. And she’s got the LETTER in her HAND. She wants to talk about it, but he’s sweaty and jangly and when Bell calls, he blows Liv off and rushes upstairs. Nooooooooooooo!

Now it’s your turn. Grade the premiere via the poll below, then hit the comments!